Why I Don't Have a Christmas Tree

When I first moved out on my own, I had a Christmas tree. A live one in a pot. I thoroughly enjoyed decorating it with my own ornaments, and turning on the lights in the evening. After Christmas, it got planted in my sister’s garden, where it lived happily for several years before giving up the ghost. We called it Desmond.

The next year, I had been joined by Mojo. I still got a Christmas tree, but had several experiences of Mojo getting her claws stuck in ornaments as she was playing with them. I also got too cheap to have a tree, so the year after that and many years besides, I treated my ficus as my Christmas tree. I got the best of both worlds: festive decorations during the holiday season, with no cost and no carpet of dead pine needles after New Year’s.

And then came Lucy.

There are a number of differences between Mojo and Lucy. Mojo was a tuxedo cat, Lucy is a white and orange tabby. Mojo never knocked anything over in the 13 years she shared my home, Lucy knocks something over every couple of days. Mojo never looked at the ficus as her own personal climbing area.

Lucy does. And when I tried hanging ornaments on the branches, they no longer served merely as decoration, but also enticement for my doofus cat to try climbing up to get them.

Having no desire to see my ficus tree fall over, I stopped decorating it at Christmas. Instead, I bought a small decoration from the Christmas tree guys at the corner. It went well the first year. The second year, it kept falling to the floor. I thought Lucy the Klutz was knocking it over on her way towards the window, but that wasn’t the case.

She was eating it. 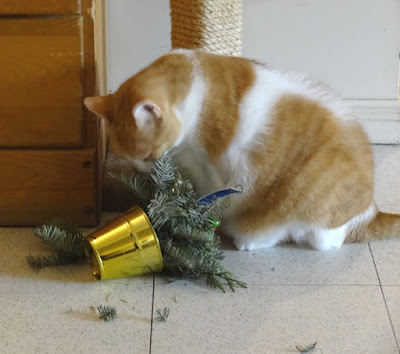 You haven’t lived until you’ve picked up cat barf with pine needles.

In the last couple of years, I’ve had my kravlenisser (small cardboard elves) on my shelves, and wrapped a string of lights around one of my dining room chairs. It’s festive. A little pathetic, perhaps, but festive(ish) and, most importantly, safe from the cat.

But it’s just not the same without a tree (or tree equivalent). Apparently not having learned my lesson, I’ve decided to try again this year.

First, I got this. 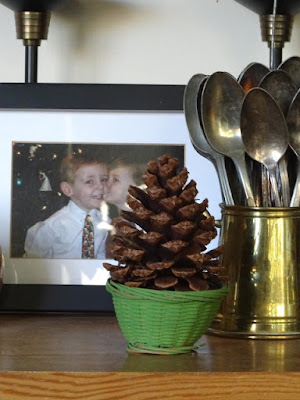 It wasn’t enough. So now I have this 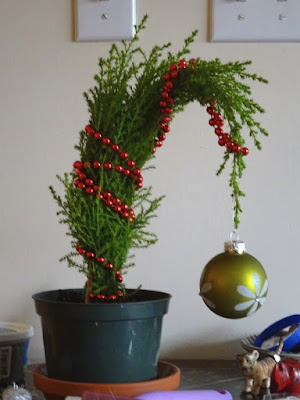 So far, Lucy hasn’t discovered it. Fingers crossed that it makes it to the end of the season in one piece.
Holidays Lucy Mojo

Caroline said…
We have new cats this year and are moving so we didn't get a tree. Which is a good thing. They climb everything. We will have to come up with a plan B for next year.
4:05 PM

woolywoman said…
I have seen a tree made flat on the wall by putting the lights up in a zig zag shape. Large zig at the bottom, zaging and zaging smaller each row to the top. Then when the lights are light it is as though a tree is there. Don't know if you would dare hang the ornaments on the lights, though.
12:20 PM