Showing posts from September, 2006
Show all

September 29, 2006
This year, I had every intention of cutting down on the amount of television watching being done around here. Of course, I say that at the end of every summer, after months spent only turning on the TV for Big Brother and the occasional movie. Then once the new season starts, I get sucked into all kinds of new and returning shows and within a month or so, am thoroughly enjoying being addicted. This year, however, was going to be different! This year, I was going to stop watching a number of shows, only keeping a handful. Turns out, not so much. I am happily hooked on a host of programs, although I am also happy to say that it's fewer than last year. Baby steps, people. Baby steps. Since I will be talking about a 'host' as opposed to a 'handful', I'm going to divide my discussion of the new season into two posts. Today is all about reality shows. America's Next Top Model . Tyra and the gang had been on the list of 'Shows to be
Post a Comment
Read more

Living on the Edge

September 25, 2006
Which turns out to be a little media heavy. I blame the accursed neck injury. It’s been a very passive month. Enough rationalization for being a slug. Onwards! Recently, I read an article in the paper that broke down power consumption between residential, commercial and industry to consuming about a third each. Before I start the rant, let me just say that I believe everyone should “do their bit” to save power. However! That’s just the point, innit? In the summer, people are repeatedly warned to keep their A/C at 26 to prevent grid overload (while in offices, workers wear sweaters because of the freezing temps) and in winter, citizens are asked to turn off their Christmas lights, while after business hours, the office towers of downtown are lit up like… well, like Christmas trees. Can we get some perspective here? Some cooperation? Found this link to an Italian Vogue slideshow via Twisty . I can just see some idiot pitching the concept: “it’ll be fierce
Post a Comment
Read more

As Bilingual As Baltimore

September 22, 2006
Not too long ago, I was replying to an email sent by a friend. She had asked me whether the Tinks were going to be bilingual and I explained that as both Janne and I are generally a little rusty in the Danish department (mor is way better), we’d do our best to help them be as bilingual as possible. Except, because I was using Dragon and we were still getting to know each other, what appeared on my monitor was “as bilingual as Baltimore”. Given the context, it seemed fitting. After 24 years in Canada, we don't use Danish very much anymore. Janne was nine and I was a month from 20 when we arrived in Canada. We were both immersed in speaking English in school/university, then with friends and then in work and love, so we find it easier to express ourselves in English, our Danish being hopelessly outdated. I think (and dream) in English and I'm pretty sure Janne does too. Of course, there is the weird Danglish we speak when around mor - a mad jumble of English and D
Post a Comment
Read more

A Link and Some Muzak

The whirlwind Poul visit is almost at an end and we've been cracking up the quality time. Which means that when I'm not spending time with family, I'm running around like a decapitated fowl, trying to catch up with the rest of my life. Much to my chagrin, there hasn't been much blog-writing - words to come on Friday. Honestly. AlisonH got herself a blog . Go check it out! Until my return, I present you with the visual equivalent of muzak. p.s. Should you wish to be the happy owner of a lamp made from popsicle sticks, it can be yours for about $30.
Post a Comment
Read more

This weekend, the Tinks came to town, expertly wrangled by Janne and naturally, today's all about loads of Tinks pictures (click for larger versions). Here, Janne looks somewhat like a deer caught in the headlights (albeit an absolutely beautiful deer - ahem!), but the boy's so damn cute, I can't not post it. Morgan already has impeccable manners. Morgan spent much of the day sitting quietly with Poul (and if you know the kid, you know how rare that is). Love at first sight, I think. Both are now standing (with help) as often as possible... And after dinner, both zonked out.
Post a Comment
Read more 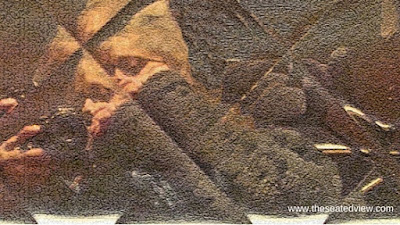 Self-image is a funny thing. How many of us see our ourselves with any degree of objectivity and/or accuracy? Usually, it's manifested along the lines of a body image that just never measures up – when will we learn that it's not normal to look like a stick? - but every now and again, the warped idea of self goes in another direction. Earlier this week, a couple of things happened that has brought home to me just how out of whack my own self-image is. On Wednesday, I had yet another in the seemingly endless appointments to try to wrestle some seating apparatus into a shape that’d be comfortable for me so I can start using my new wheelchair (a.k.a. the sculpture in my livingroom) Who knew that finding a cushion that’s comfortable for your arse could be that difficult?  While discussing the frustrations of the lengthy process, the seating expert (and she is good), said that people with “a fair bit of skeletal deformities, who are very active, are the hardest to fi
Post a Comment
Read more

Not a lot of words today, but to keep you entertained, a few pictures triggered by John's comment on Monday. As he mentioned, my uncle (or yes, morbror) Poul is highly entertaining. He's lived all over the world, is a bottomless fount of interesting stories and bad (but funny) jokes and he has several signature moves. I like to call this one The Stork: And it's contagious. A few years ago, he infected John and Ken.
Post a Comment
Read more

When the monarchs start fluttering south in September, my uncle Poul (mor's brother) arrives for his annual visit.
Post a Comment
Read more

The Obsession is nearly over and this week saw such monumental moves that I have to discuss it again. But first! A photo to keep the hordes who are unaccountably not glued to the TV at Big Brother All-Stars time - if you only knew what you’re missing – from banding together and doing an intervention. Yes, I have A Problem, but I don’t want to be cured: I call this Storm Coming: And speaking of approaching storms... Coming into this week, things were looking dire for my Janey. Will was brilliant at manipulation - he made this season - and I think I figured out how he does it. I noticed how Janelle would every now and again frown when he said something that set far-away alarm bells ringing and every single time, he’d speed up the talking, give her a twirl and a compliment. I saw how he did the same with other players (sans twirl) and realized that he drowns them in words. He notices a crack in the spell and before it has time to widen, he talks and talks and talks, obfuscatin
Post a Comment
Read more

Last week’s post about Moments and eternity sparked a good deal of reminiscing and walks down various memory lanes hereabouts. One of the paths led to the floor. Or rather, my parents’ floors. Persian rugs have been part of my life for as long as I can remember. My parents would save up money, often for other things, but then chance upon a particularly beautiful rug and be unable to resist, putting off the practical for little bit longer. They didn't have many rugs in my childhood, but as the years went on and they gradually became more comfortable financially, more were added. Placed around the house, they were islands of beauty, pulling the rooms together, pulling our family and our history together. My favourite has been with us since I was a child. It is a Maslagan rug. I don't know much about it, its origins are a mystery to me and although I did do a brief Internet search, I stopped once I found a place to link to, because I discovered that I don't
Post a Comment
Read more

A long time ago, I watched a Japanese movie called After Life. It takes place in a sort of way station between death and eternity. As far as I remember – and after all, I am getting old, so who knows – the dead would spend 7 days there reviewing their life to choose the moment in which they would spend eternity. Once they had chosen, the staff of the place would recreate it and voila! eternity would start. I thought – and still think – this is the one of the most charming ideas I’ve ever heard of and naturally started thinking about my moment immediately. The problem is, I can’t choose just one. I have narrowed it down to a handful and wonder if they’d let me have a sort of slideshow, so I don’t have to let go of a few favourites… For as long as I can remember, touching a tiger has been #1 on my Life List (i.e., the “list of things to do before I die”). Six years ago, Ken worked some magic and made it happen. With mor as driver, we went to a wildlife sanctuary north of
Post a Comment
Read more
More posts