Showing posts from July, 2005
Show all 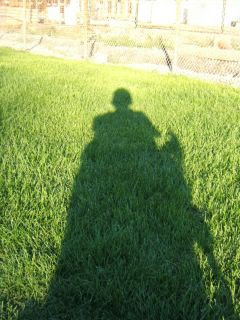 July 27, 2005
As you’ve probably figured out by now (being the most brilliant blogreaders in the world. G’ahead – revel in it), I watch reality shows. I used to read romance novels when I was stressed/tired/busy/wanted a mental vacation. After I got bored with that genre (not as quickly as you might think – have you read some of the newer versions? I’ve seen them described as ‘porn for women’), I moved on to what I call “trashy mysteries”. Chick lit with a few murders and some mayhem, the ‘trashy’ appellation not at all a judgement about their worth, but more a statement about the level of emotional involvement (not much) required. These days, I usually go for something forensic ( Kathy Reich s is a favourite). It’s like doing a jigsaw puzzle – smart enough to require some focus, but if you’re not in the mood, you can just sit back and enjoy the ride. It’s my way of unwinding. In the past few years, I’ve watched reality shows. And – gasp – worse: I’ve enjoyed watching realit
Post a Comment
Read more

Dos and Don'ts of a Restorative Weekend 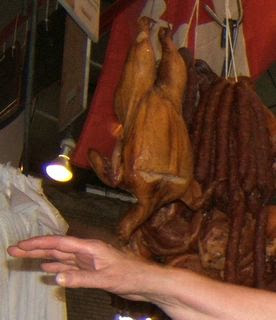 DON’TS: Answer the phone. Get up early. Cook. Think or talk about anything serious. DOS: Hang out with your mother and sister and meander around the St. Lawrence Market , checking out vendors, eating sushi and sausages (alas, no pictures this time). Take pictures of your mother doing the chicken dance next to the smoked and headless chicken Crop your mother looking spectacularly silly out of the chicken photo. If you value your life. Have your unborn niece(s)/nephew(s) try on adorable alpaca sweaters with little sheep. Crop your sister’s face looking spectacularly silly out of sweater photo. If you value your life. Sense a theme about headless chicks. Restrain laughter in front of your sister. If you value your life. Check out the new exhibit at the Market Gallery called Heart-Shaped Box: A Poetic Reflection on the Rebellion of 1837 . Get all verklempt over heartrending inscriptions on tiny boxes. Get lost in looking at old drawing
Post a Comment
Read more 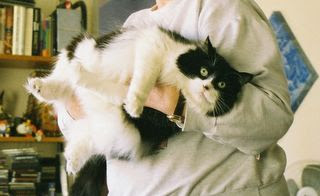 Life is hopping. Hopping so much, in fact, that I don't have time to be witty, pithy, wise or even mildly entertaining. Hence a cop-out photo of the Moocher in an embarrassing position to amuse you while I address the 1,758.73 things on my list. p.s. Really. At least half of that is fur.
Post a Comment
Read more 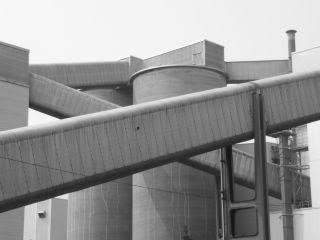 The highlight of the weekend was a visit from the radiant parents-to-be, which evolved into a quintessential Andersen moment. I should mention – for the purists among you - that although my brother-in-law was not born an Andersen, he is a naturalized one and well… just roll with it. As has already been established, we’re Danish. When Danish people tell their friends they were out, the first question is invariably “what did you have to eat?” - we’re European and live to eat. My family has taken this trait to a new level and has combined the love of food with an almost unholy fascination with photography. We not only take photos of people during a meal, but also of the meal itself and the eating thereof. Usually, half our vacation snaps involve food. Back to the weekend. We took The Tinks to lunch and as they wanted Asian, we went to Spring Rolls , home of delicious food, large (and beautiful) portions, with low prices. One highlight was the Sweet and Sour Soup (incre
Post a Comment
Read more 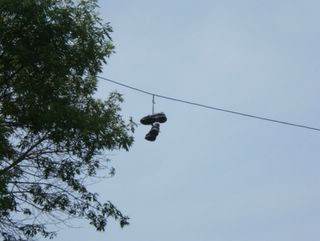 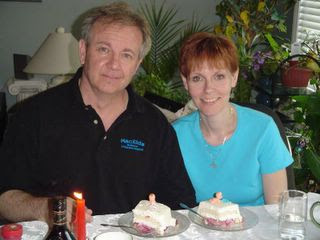 I’ve spent the past 3 days wondering how you follow a post about a terrorist attack. There is no natural segue from that. Then I decided to follow the example of Londoners and bloody well get on with life. And what better way than…. Introducing (drumroll, please). ... My brilliant sister, Janne (who would be my favourite sister, even if she wasn’t my only sister) and my talented brother-in-law, John, who, needless to say, is my favourite brother-in-law: who have been so brilliant and talented (and efficient) that they have created some pretty special magic. Introducing (double drumroll, please): We call them The Tinks and already, they have brought much joy into our lives. I can’t wait to meet them, which should happen in about 6 months. I have elaborate plans to spoil and corrupt them, but hereby promise to not take them to get tattoos until they can vote.
Post a Comment
Read more

July 07, 2005
My thoughts are with you. May peace be with us all.
Post a Comment
Read more

July 06, 2005
I’m on a newsfast these days. What happens in the world upsets me beyond measure. I do check the headlines of The Toronto Star every day and read (some of) The New York Times on Sundays, but I am no longer well-informed. And I never watch the news on TV. The faces of the poor, sick and maimed haunt me. The images of mayhem and death seem permanently lodged in my mind’s eye. The incandescent rage at leaders who do not lead, who are concerned only with re-election and the special interests of their rich cronies, instead of creating a liveable future for us all, threatens to overwhelm me when I am too aware of the news. The disgust at a media which has become not about sober analysis (and exposure) of world events, but ratings, access, sycophantic arse-kissing and blatant bias reduces me to sputtering incoherency every time I turn on the TV (with the sole and occasional exception of the CBC ). And now the G8 are meeting in Edinburgh, staying in a beautiful castle
Post a Comment
Read more 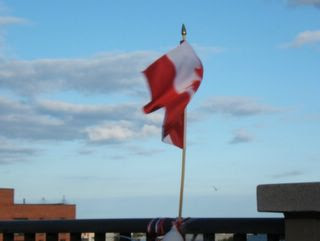 After a thoroughly gasping hot week (or it might have been an eternity – I can’t remember), it finally cooled down a bit this weekend. It was a huge relief after temps as high as (with humidex) 44. For non-metric users, that’s 111F. That’s enough to fry an egg on the sidewalk, I think, and if I’d had any (eggs, that is), I’d have given it a try. Instead, I stayed mostly inside, praying to the gods of air-conditioning and going stark raving mad from cabin fever. Which, if this trend of oven-like temperatures continues for the rest of the summer, might work out, as only mad dogs and Englishmen would go out in this between 11am-7pm and as soon as I figure out what dog I want to be , I’ll be out there with the rest of the crazies. Anyway, back to the weekend. Thanks to a brisk wind from the north, things cooled way down. It was cool enough for a sweater and so windy that it was impossible to get a stirring picture of the Maple Leaf fluttering majestically in the breeze at
Post a Comment
Read more 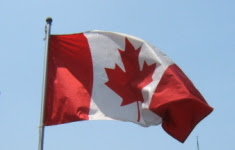 I was born in Denmark and spent the first 20 years of my life there. In 1982, my parents decided to go to Canada for a couple of years and as I couldn’t bear to live in another country than my family (and was thoroughly disenchanted with studying English at the university there), I decided to come, too. I hated the thought of leaving. I hated seeing the house in boxes, I hated leaving my friends and extended family, I hated leaving everything I’d ever known. I put down roots deep and it was painful to pull them up. But Canada awed me from the word ‘go’. Its vastness blew me away – I counted 12 lanes on the highway going from the airport (and coming from a country where the biggest highway had 4 lanes, this was something), the distances (I remember being overwhelmed that it took a drive of a whole 20 minutes to get to the mall) and wow… the people (did they all have to speak so fast?). I fell in love without knowing it at first, but soon realized that this was o
Post a Comment
Read more
More posts