Showing posts from November, 2008
Show all

November 28, 2008
Cats can make everything entertaining . Mojo and I need a Roomba. M ichele has sent me two very blogworthy links this month. The first one measures how old your brain is - the fact that mine was 36 after spending a day with two very energetic three-year-olds made me worry a lot less about my Swiss cheese memory and whether that meant I was getting old. She also sent me this one on side effects of a particular new beauty product. Make sure you have time, a cup of tea or a glass of wine and no children (or work people) around when you go to that link. You won't regret it. The presidential election may be over, but if you didn't hear about the Québec comics who reached Sarah Palin and persuaded her that they were Nicolas Sarcozy, the president of France , read the story here . And you can hear the recording of the call here . T he 100 most commonly misspelled words . I didn't read the whole article in one sitting or my internal editor would have
Post a Comment
Read more 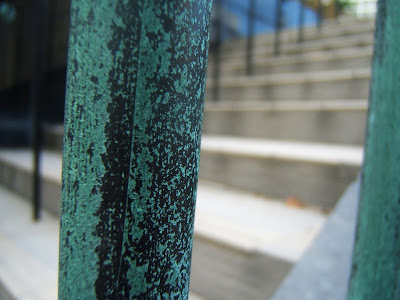 November 25, 2008
Introspection time over at HealthCentral: "At the beginning of this year, I injured myself while having too much fun with Photoshop, rendering my right elbow and shoulder utterly messed up (note to self: decrease amount of time spent at the computer)." The rest is here .
Post a Comment
Read more

I used to be a bit of a culture vulture - went to concerts, museums and galleries, the opera and dance (modern, traditional ballet sort of bores me) – and most of the time, I went either with my mother or Ken . It was our "thing" and I have a lot of good memories connected to those outings. Like the time when mor - if you're new around here, that's the Danish for mom - and I were almost thrown out of the opera because we couldn't stop giggling at a particularly ridiculous performance. The time Ken and I went to see an exhibit by Anish Kapoor (astonishingly beautiful art and last year, Ken made me a purple hat inspired by this , which is breathtaking in person) and on the guided tour when the woman working in a gallery spoke of how she felt she could whisper all her secrets to one particular sculpture, we had to stop looking at each other in an attempt to control another helpless fit of the giggles. Ken and I, awed, seeing Cirque du Soleil for the first ti
Post a Comment
Read more

November 21, 2008
A while back, Laurie tagged me in the "7 things" meme and much as I like the theoretical idea of this one, my reaction was more along the lines of "seriously? How do I do this?". I've been blogging for 3 1/2 years and there are few corners of my psyche that I haven't already written about. Well, there are some, but I’m not willing to hang everything out there in public! So it’s taken me a while to get here, percolating on this in the back of my mind - it’s possible I may have been overthinking this a tad - and here they are. And here are the rules: Post the rules on your blog Write 7 random things about yourself Tag 7 people at the end of the post Pass on the tag I have an overactive internal editor and automatically edit anything I read, although most of the time, I manage not to write irate letters to newspapers about the way they are bastardizing the English language and grammar, dumbing down beautiful and eloquent in
Post a Comment
Read more

I don't use the term 'hero' often and I don't have an awful lot of personal heroes - in fact, I think it might take me it some time to come up with even a small list. But last week, when I rooted around on the new 7-day releases at my video store (where you can rent three old releases for the price of two new ones and I'm cheap enough to like that), two of the ones that made it home with me turned out to be about two men who I definitely consider personal heroes. And I only knew about one of them. Shake Hands With the Devil . When Romeo Dallaire's book about the Rwandan genocide came out, I couldn’t find in audio, which upset me, because I believe there are certain things you must read, must watch, to which you must bear witness. I believe we must do this so that when it happens again, we will be among the people who stand up and say no, who are part of the voices that speak against it. It is the only way to lend validity and weight to the phrase &quo
Post a Comment
Read more 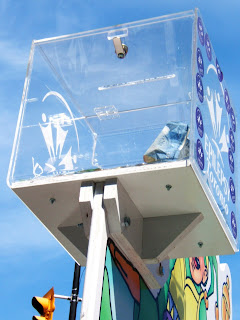 I've been thinking about assumptions. More specifically, the assumptions made by certain bright lights in festivals and other organizations. Assumptions about the audience, the people who will come out to shop, to participate. Assumptions about whether these include people with disabilities, people who use wheelchairs or scooters. And apparently, we aren't expected to attend Buskerfest. Or have the money to make a donation. (to be fair, on days 2-4 of the festival, they did provide big barrels at waist height. You all know how much I love (grrr) Buskerfest and leap on any chance to rant about it, but I have to be fair. Dammit) The local tourism board (of Toronto? Ontario?) is kind enough to set up a stall at the Market during the season to provide visitors to our fair city with information. Based on the height of that window (the top of my head may just peek above the counter), we don't travel, either. Or buy condos . And the winner is... I decided to get the
Post a Comment
Read more

A Beginners Guide to RA: Love & the Horizontal Tango

November 12, 2008
This week on HealthCentral, I go on about romance and sex: "One of my favourite frog stories -- as in, "you have to kiss a lot of frogs before you find a prince" -- was the man who said he didn't want to date me because he wanted an equal partner. As I'd managed to have a number of equal relationships with family, friends and past lovers despite my disability, I inquired what prevented me from taking on that role. To which he muttered something about wanting a woman who could help paint the house. And that was the moment I realized that someone not being able to "handle" my RA was entirely about them and not me. Quite a liberating moment." The rest of the post is here . And the contest will remain open until Sunday.
Post a Comment
Read more 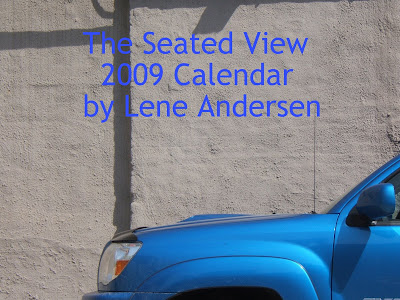 I’ve been slaving over a hot computer for a while, gathering images that qualified as candidates for next year’s calendar and this weekend, did the final push, Photoshopping like mad and battling with CafePress designs (which are deceptively easy-looking). My shoulder’s fucked, I’m cross-eyed, need several day’s worth of codeine and sleep, had a blast (most of the time) and am yet again wondering why I keep forgetting it always takes longer than I think it will. But the good news is that the 2009 calendar is in the shop along with a few other seasonal products (plus one that’s an antidote to all the looming winter). To celebrate my doneness, I considered getting drunk, but that’s just fun for me. And potential witnesses. So I’ve decided that instead of making a fool of myself in public, I’m giving away two (2) The Seated View 2009 calendars. Leave a comment saying pretty much anything you want - tell me a joke, talk about your Christmas stress (if you celebrate Christmas) or
Post a Comment
Read more

Last year, in response to NaNoWriMo , Matthew over at Defective Yeti came up with NaNoReMo - same concept, except instead of writing a novel in the month of November, he read one and blogged about it. Much less work! Last year, he chose Catch-22 and although I enjoyed reading about his experience, I'd read it already and didn't join in. This year, he and his readers chose to read Lolita by Vladimir Nabokov. It's one of those classics that I've always meant to read, but never did and so, in a moment of procrastinating doing something I ought to be doing, I popped over to Audible to check out the edition/narrator. And found that the narrator was Jeremy Irons, an actor I have liked tremendously since the early 1980s when I first saw him play Charles in Brideshead Revisited . H e makes interesting choices, not always the standard good guy, instead choosing complex, complicated roles, finding the humanity and relateability in men who are often very unlikable,
Post a Comment
Read more

I Thought It Was a Science?

November 07, 2008
Earlier this week, I read a post on one of the HealthCentral sites by one of their medical experts. This doctor started by saying she did not “believe in” a particular medical problem and continued to explain how she had come around by experiencing it herself. The particular site, doctor and medical problem are irrelevant to my rant today, so I'm not going to link to the post because there's no need to flame the woman. However, as I was reading the post, I could feel my blood pressure rise and all that’s in my head was a giant "Pardon Me?!". Which has followed me around for days now. I t reminded me of the numerous other incidences I've heard of and read about, as well as experienced myself, in which a doctor didn't believe in something, believe their patient's experience of symptoms and as a consequence, people have gone without treatment, have been in excruciating pain, have had their bodies irreversibly damaged by a disease that that doctor didn
Post a Comment
Read more 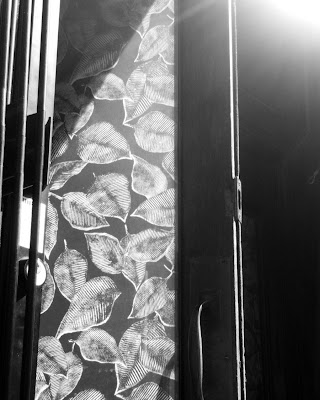 Congratulations to those of you in the US for an election that's reminded the rest of us why voting is such a terrific idea. Nicely done.
Post a Comment
Read more

November 03, 2008
The other day, I was having conversation with a friend - you know the kind (the conversation, that is, not the friend) - the kind that takes place late at night when it's dark outside, your shields are down, making you get all deep and philosophical. Great fun, but it makes you think for days. This particular part of the conversation was about epitaphs, as in what would you want your epitaph to be. Aside from the fact that I'm not sure something as complex as a human life can - or should - be summed up in a pithy one-liner, as an exercise in connecting with what you consider meaningful, what you would like your life to mean, it's interesting. Also potentially depressing if you upon consideration discover that you would've liked to colonize Mars and instead became a well digger, but let's skip right over that part... I remember exactly where I was and when the moment I realized what my life's ambition was. I was in my teens, in my room in Denmark watc
Post a Comment
Read more
More posts