Showing posts from November, 2015
Show all

The 5 Stages of Writing a Book 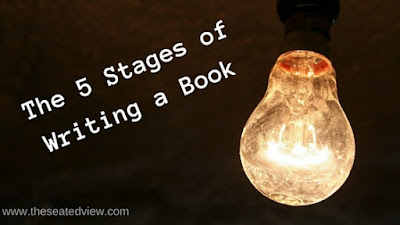 You’ve heard of the five stages of grief , right? As I’ve been writing Book 2 in the Your Life with RA series, I’ve come to realize that there are also five stages of writing a book. To wit: Delight The first stage of any book is all about the idea. It can sneak up on you, grow quietly, or burst into your mind fully formed. Regardless of how it happens, this is utter delight. You’re instantly swept away by your own cleverness, chortling to yourself with how brilliant this book is going to be. It’s like falling in love at first sight, and equally obsessive. This stage is invigorating, motivating, and compulsive. You want to spend every minute of every day writing to make your idea a reality within weeks. Not so fast, though. First you have to wrestle with it. Wrestling The idea for your book can usually be summarized in what’s called the elevator speech — imagine you have to tell someone what your book is about on an elevator ride, lasting no more than 30 secon
1 comment
Read more

I Can See Clearly Now: A Memory of My First Glasses

November 17, 2015
I was eight years old, maybe nine, when I realized what it was like to see. It is a moment imprinted in my memory, as clear as if it happened yesterday. For a while, I had not been able to see the blackboard in school. Well, I could see it as a blackboard-shaped dark grey thing that I knew was a blackboard. My teacher would write things on it – I could hear the chalk against the board, and listening to her talk and reference things that were supposedly written there. But I couldn’t see it. Instead, I would lean to my left and ask AB, my best friend sitting right next to me, and then write down what she said in my notebook. She was my translator, the interpreter of knowledge. I remember that, the leaning over and AB whispering to me. And I remember that it never occurred to me to ask for help, or to tell a grown-up that I couldn’t see the blackboard, even though I had previously been able to see it. It just felt normal. I couldn’t see it, but AB could. We were different in
6 comments
Read more
More posts