Showing posts from January, 2014
Show all

January 30, 2014
Paula has always been in my life. She became part of the family before I was born when she married my uncle Poul. They met when he went to work for the U.S. Army in Germany after World War II, fell madly in love and married. Later, they lived all over the world, but by the time I was born, they’d moved back to Denmark. It can’t have been easy for her. The Danes are not fond of Germans, what with having been occupied by Hitler’s forces during the war. To this day, we have issues with our neighbours south of the border. Paula was fluent in Danish, but did have German accent and I think she was always a bit of an outsider in the family. Denmark can be insular and not only was she foreign, but she was also different in many other ways. She was smart, she played the piano really well and she had a complicated history. Living, as they did, in a fairly uncomplicated small town, this was enough to set her apart. I learned about shades of grey from Paula. History tells us that many
6 comments
Read more

A Beginner's Guide to RA: How To Read a Study

January 29, 2014
My new post for HealthCentral deconstructs how to read a research article: "How do you interpret a research study? Staying informed about rheumatoid arthritis, treatments and other aspects of living with the disease is a big part of becoming empowered. Finding that information often involves learning more about RA research, even reading articles about studies in scholarly journals, such as The Journal of Rheumatology and Arthritis Care & Research. And this is where most laypeople hit a wall. Like all professions, scientific research has a jargon and s specific way of doing things that can seem unintelligible to the rest of us. But if you know a few tricks, you can make sense of it." You can read the rest of the post here .
Post a Comment
Read more 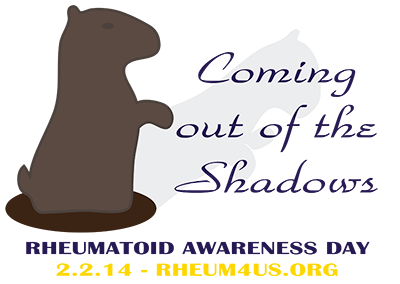 A few weeks ago, I received an email from Kelly suggesting people in the RA community write blog posts on what rheumatoid awareness means to them , just in time for the February 2 Rheumatoid Awareness Day.  More specifically, she asked “ what difference do you think it would make if Rheumatoid Disease were recognized for what it is by everyone…?” And I immediately knew what I wanted to write. Settle in for a bit of speculative creative writing, starring our fictional protagonist, Margo. Date: In the Future Margo is sitting in her family doctor’s office, stunned and more than a bit anxious. Her doctor has just told her she suspects Margo may have rheumatoid arthritis and is now speaking to the secretary about arranging a referral to a rheumatologist. Fifteen minutes later, Margo leaves the clinic with information about her specialist appointment the following week. She was surprised things are moving so fast, but her doctor explained that RA is considered a “ medical
6 comments
Read more

The Rollercoaster: A Guestpost by Kim P. Miller

Today is really special for me. I met Kim P Miller last year when I interviewed her about her book Living with Juvenile Arthritis: A Parent's Guide . We share a passion for raising awareness about juvenile arthritis, coming at it from different perspectives. I as an adult with JA, she is a parent of two boys who have JA. We stayed in touch and a few months ago, I wrote a guest post on her blog Living with Juvenile Arthritis . Today, I'm honored to host her on The Seated View. She's writing about the highs and lows of being a parent of a child with JA and giving away a copy of her truly excellent book.   The act of parenting any child is a lot like a roller coaster. There are high points and low points, there are ups and downs, there are crazy twists and turns that you didn’t expect. You can guess what the ride might be like, looking at it from the outside, but you never really know what it is until you’ve actually gotten on and taken a spin. What it looks like fr
6 comments
Read more

It’s flu season — do you know where your germs are? I’ll tell you where they are: over here, making me sick! The Ontario Medical Association recently released a statement encouraging people to stay home when they’re sick and asking employers to not require doctor’s notes: Employers should encourage workers to stay home when sick - not require sick notes which has a discouraging effect and forces patients into the doctor’s office when they are sick, which only encourages the spread of germs to those in the waiting room, who in some cases are more vulnerable. Thank you very much OMA for this moment of sanity! I am one of the people who is more vulnerable. I take immunosuppressants for my RA. This combination of RA and the Biologics medication make you vigilant to the point of paranoia. You`re on the tail end of a cold? I don’t want to see you. You had the runs this morning and are pretty sure it was the Indian food from yesterday? I don’t want to see you. Your child
4 comments
Read more
More posts