Showing posts from March, 2009
Show all

March 30, 2009
Cindy B. posted a comment on the word post earlier this week - by the way, did I misplace all my punctuation in that? Here're the periods I forgot ........ - and it's perfection if you're a word geek. Save the Words . Heaven. There's a s tudy showing that sex as we know it – and fertilization – occurred much earlier than previously thought. In fossilized fish, no less. Before becoming fossilized, one assumes. Portia de Rossi apologizes for marrying Ellen. Looking for a new career? Are you neat and slightly anal-retentive? Check this one out. Sent to me by DavidG, who also sent me proof that the CN Tower is the 12 th Cylon . And if anyone as much as thinks of muttering about anything that happened in all of Season 4 (I’m a season behind), I will… erm… will… avenge myself! That’s it, avenging. So don’t say anything. Please? (I know... I'm so scary) And this one . I don't know what to say. Utterly speechless. From LynnM, a new take on crayo
Post a Comment
Read more

Just the other day, I was bitching to a friend about the dearth of good movies these days. Movies that are about something other than mindless explosions - okay, so a good explosion or two can be quite satisfying, depending on your mood, but you know what I mean. Movies where the script, the acting, the direction and the cinematography all come together and create something that is engrossing, transforming and more than the sum of its parts. Milk is one such movie. I knew the broad strokes of the story of Harvey Milk, the first openly gay man to be elected to major office in California and I knew he was assassinated for it. The movie doesn't leave that as a surprise, starting with archival footage of the announcement of the shooting of Milk and the mayor of San Francisco . As the opening credits roll, it also shows archival footage of gay men being rounded up by police, very effectively setting the time and prejudice against which the story plays out. The movie cuts back and
Post a Comment
Read more

A Beginner’s Guide to RA: Back to School

March 26, 2009
More fodder for the reference area on HealthCentral: "When your RA starts to affect your ability to do your job, it can be terrifying, persuading you that your ability to lead a "normal" life is close to over. It doesn't have to be. Retraining and education can help you find a new career, a new life." The rest of the psot is here .
Post a Comment
Read more 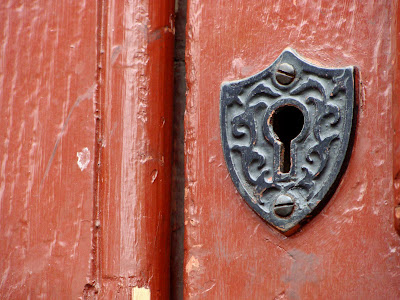 Geeking Out with New Words

I've had the kind of week that usually only happens during Mercury retrograde - not that I would necessarily admit to a strong belief in astrology, but when a pattern happens often enough, the accumulated evidence will eventually impact my position and shift it a little, because if it didn't, I would have to abandon the scientific indoctrination I got in school and embrace similarly ludicrous positions, such as the Earth being flat or global warming not existing and where was I again? Oh yes... my week. A week that has included people in management positions on in various agencies and organizations involved in my life deciding to annoy me to the point of requiring communication in written form. Communication which may have been irate to the point of possibly burning a hole in the recipients’ respective monitors and I am not ashamed at all of admitting that I enjoyed the exercise (and the subsequent apology). A week involving my wheelchair yet again acting as if it was possessed
Post a Comment
Read more 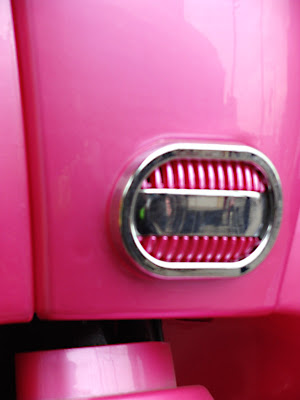 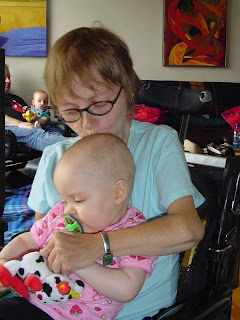 I've just returned a pair of size 8 pants because I couldn't pull them up past my hips . This is a very new experience to me. In the past, I've hovered around size 4 or 6 (with temporary excursions into size 8 the two times I quit smoking) and aside from the myriad variations of what constitutes women's sizes - aforementioned size 8 pants stopped exactly at the same point on my hips that my size 6 jeans do - I'm finding that my body has changed. The last two years of being on Humira has not only rendered my blood work normal, but also added weight to my body, changing its shape, likely helped along a bit by middle-age spread. A nd you know what? I welcome it. Because in the summer of 2006, I looked like this Photo by Janne/TinkMama Which is why for several years, there were no photos of me on this blog. I 've always tended towards the slender and muscles atrophied from decades of non-use contributed to that, but when I started
Post a Comment
Read more

March 16, 2009
It’s Friday afternoon and I'm on my way home from running errands, basking in the sunshine that can feel warm if you’re out of the wind. Spring is coming, but I can still see my breath. I turn the corner onto my street and notice two police cars. Idly, I wonder what's happening – there’s two of ‘em and one’s parked slightly askew as if the driver was in a hurry and that usually means something’s happening. However, they're down at the end of the building by the cleaner’s, so I assume it's got nothing to do with the residential tenants of the building and motor on. Get into the lobby, have a chat with a tenant, we go up the elevator, he gets off on his floor, I get off on mine, back out of the elevator and turn, preparing to open the door of my apartment. A nd stop. And gawk at the four strapping police officers standing in a semicircle in front of my door. " Can I help you?" I ask, adding a nervous joke, "I didn't do anything, I swear" (why a
Post a Comment
Read more 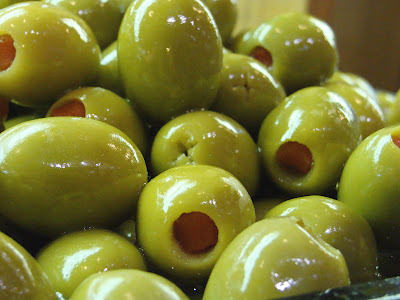 March 12, 2009
My new HealthCentral post is up: "The other day, someone asked me why I couldn't seem to learn to work within my limits, despite knowing that doing too much inevitably leads to needing to sit still for several days healing. For once I didn't joke, but honestly told them it was because of the dread." The rest is here .
Post a Comment
Read more 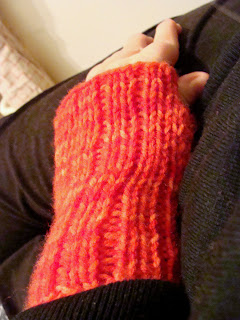 The snooze alarm had been going off for half an hour before it finally penetrated my brain enough to make me wonder what time it was. I peered blearily at the alarm clock with one eye, an act which suddenly made both eyes open wide so fast I may have sprained an eyelid. It was half an hour after my attendant usually comes to get me up and when I called the staff lounge to inquire what happened, I was passed on to the manager, who told me that "there had been a miscommunication" which meant that "a shift hadn't been filled" and notifying me that I would be getting up just in time to arrive at my desk around noon. Several hours later than I normally do. J ust. Fabulous. L iving with a disability that requires the participation of others to get through your day is a finely tuned and precariously balanced machine. Hospital personnel can decide that today, you don't get to use your wheelchair , parallel transit can go on strike and decide that you don't get t
Post a Comment
Read more

You Know Spring is Coming When…

March 09, 2009
Your neighbour gets the first bulb and flower catalogue of the year. Shoestores are putting flip-flops in the window. Each day features a sneezing fit of at least 10 sneezes in a row. The windows are not frozen for a whole week. Denmark and Victoria report snowdrops and crocuses . Daytime Savings starts (although I still think it’s ridiculous to do this before the official first day of spring) and you know you'll spend the next week being bleary-eyed, missing that extra hour. Some days, handknit socks are too warm. There are tulips in the stores. Birds twitter deliriously (so far, only observed once, but it was there!). You start wondering if you’ll be able to fit into your summer clothes. It’s too warm to snow, so instead of getting 30cm of snow, there’s all day rain of biblical proportions. It’s still light outside when I make dinner. Please add your own (for those coming out of summer , add whatever you like). Maybe if we try hard enough, it’ll com
Post a Comment
Read more 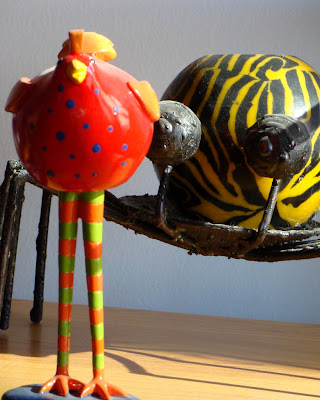 I've started on my quest to watch Oscar nominated movies - yes, after the bald, naked guy has been handed out, I move slowly, but I do get there - and started with Vicky Cristina Barcelona . I'm a big fan of Penelope Cruz and Javier Bardem (and to be honest, I also like to drool at the latter) and I used to be very fond of Woody Allen films, although not so much in recent years, but more on that in a bit. T wo American women travel to Barcelona to spend two months there, one is engaged, intellectual and rather uptight, the other is a "free spirit" with all that this implies (and neither appear to be much beyond a ‘type’). They meet exotic painter (another one-dimensional character), he sleeps with one, then shacks up with the other, eventually joined by his exotic, hotblooded and slightlypsychotic ex-wife (and there's one more) and if you’ve watched a couple of Woody Allen films, you know what happens next. And that's my problem with this movie. I feel like
Post a Comment
Read more

March 02, 2009
I love the way kids react to my wheelchair. They're fascinated, checking out the knobs, buttons and repeatedly coming back to the one thing that is verboten due to risk of injury: my joystick. They'll ask a quick question or two about why I'm in the chair and why I can't walk and we get on with other things, the chair never mentioned again. That is, if we are given the opportunity by parents, who will rush over and pull the child away, shushing wildly, apologizing again and again for their offspring's inquisitiveness and in one fell swoop, teach the kid that I am Different, Strange and Uncomfortable. I usually engage in educational mini lecture #380b, explaining that it's perfectly okay for kids to ask questions and no, it's no bother at all, but by then, it's too late. The freak suggestion is already there. K ids don't have problems with disability. Adults do. O ne of the BBC shows for children is co-hosted by Cerrie Burnell, a woman who was born wi
Post a Comment
Read more
More posts