Showing posts from December, 2010
Show all

December 31, 2010
It is my habit to write something thoughtful and pondering - although hopefully not ponderous - on the last day of the year, sort of summing up the theme of the past 12 months. This year, however, it could be argued that I've already done that - early this month, I wrote about finally getting to that place in my personal growth where instead of mindlessly keeping going, not only did I protect myself from harm, but I also felt good about it. Alison , wise as usual, wished me a happy new year in a comment on that post and she was absolutely right. Because the theme of this year has been finally learning that sometimes, not doing is the right thing to do. I'm not crazy enough to believe that this one won’t need learning over and over again, but the fact that I finally got there, after years of talking about it but never quite figuring out how to click from theory of it to the practice of redirecting the fierce is my big accomplishment of 2010. And so, what do you do when yo
11 comments
Read more

Progress in RA: A Decade of Hope

December 30, 2010
The annual review post. Yeah, I went there: "The new millennium started with the scare of Y2K - remember that? Everyone was convinced the sky would fall the minute the clock ticked over at New Year's, but thankfully nothing happened. For people living with RA, the new millennium didn't look much different, but the seeds of a revolution had started and now, as I sit by my computer thinking about what has changed for us in the past 10 years, I look at it entirely different landscape." You can read the rest here .
2 comments
Read more

It seems as if Europe's getting all the snow that Canada normally again - here are some photos of London after their latest snowstorm. Of course, then there's the calamity that just hit the eastern US - found this video of a blizzard time lapse . Pretty impressive. In other news, there's a town that can't find a jury who's willing to convict on a charge of possession of a small amount of marijuana. This one deserves a post of its own, but it's the end of the year and I'm back to work. Well, not just that - I'm also having the hardest time getting out of vacation mode, so I'm doing whatever I can do to increase my chances of vegging with a good book or a movie. To that end, I also found this video about bikes in Copenhagen . I have half a mind to send it to our esteemed new mayor and waiting to see if his head explodes. And in a completely random segue, albeit staying within YouTube, here is a perfect illustration of what happens between sibli
1 comment
Read more 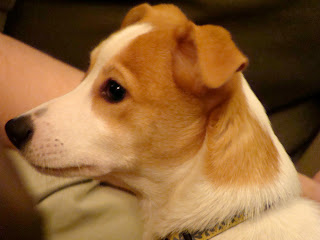 We have a new addition to the family! Sadie celebrated her first Christmas with us on Friday and was a terrific addition to the festivities. And just who is Sadie, you ask? Michele's new Jack Russel-Corgi puppy  Adorable - as Morgan said once or twice - and has a wonderful personality. We all had a blast playing with her. And we all had a blast in general. The anticipation was palpable There was singing And laughing And playing with presents Magic. Just magic
4 comments
Read more 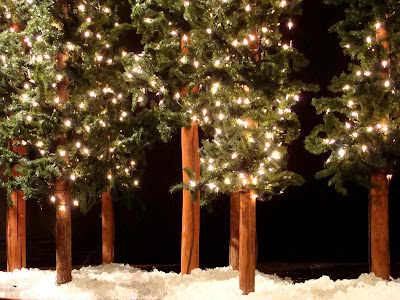 Wishes for the merriest of holidays to you and yours from Miss Lucy and myself.
3 comments
Read more

Do You Lose When You Gain?

December 22, 2010
A couple of weeks ago, I wrote about learning to protect myself . About finally getting it. Finally acting in accordance with my alleged intelligence and bowing out of the celebrations for International Day for People with Disabilities because if I didn't, there was a significant risk that I would lose several months of my life to healing. Julia* left at very interesting comment on that post: " Huh. Am I the only one with mixed emotions here? This is growth, this is maturity. Heaven knows that avoiding disabling pain is a good thing. And I'm really happy for you.  But there are these petty thoughts in the background. Is there no regret for the missed opportunity? The wisdom comes at the cost of a certain fierceness. Is there no regret for the fiercenss?    But maybe the fierceness isn't gone, maybe it is just re-directed. Once again, you are making me think." I want to apologize for making you think, Julia, but consider the favour returned because I've
11 comments
Read more

December 20, 2010
There's a reason I don't pay too much attention to the news beyond scanning the headlines on a couple of articles a couple of times a day - wait, that actually sort of sounds as if I do pay attention to the news, but nevermind, the reason it doesn't go much beyond that is that it tends to make me cranky. And although there is only five days left until Christmas, I'm going to share some of these types of stories, because… Well, there've been a number of them and I might as well share them with the world, right? Our new mayor, Rob Ford, as in his first Council meeting followed through in his election promise to cancel the $80 vehicle tax which was intended to go to green initiatives, etc., And which was incredibly unpopular with the driving public (or so we have been led to believe). This was one of his major platforms and I'd like to take this opportunity to state publicly that in my opinion, if you can afford a car, you can afford an $80 a year tax. As I&#
5 comments
Read more

December 17, 2010
Those of you who - breathlessly? - follow the ramblings that I call my tweets - know that I spent last weekend doing two things: working and watching Lawrence of Arabia. I found out that I tried watching it once before and that I'd only made it about 41 min. in before abandoning the effort. The first 41 minutes make you realize just how long the movie is and at the time, I didn't have the patience. This time, I stuck it through (if spacing it out over four days can be likened to any sort of sticktoitiveness) and I'm glad I did. This won't exactly be a review, more a collection of thoughts and probably only a smattering - I feel as if I could write an essay about this movie. And by the way, thanks to The Boy , I will forever exclaim (rather than merely say) Lawrence of Arabia! with rolling Rs, an exclamation mark and a veddy British intonation. (might help if I put in the link to the video, huh? Vacation brain, my apologies.... Also, link fixed. Thanks to Trevor for
3 comments
Read more

December 16, 2010
The season, shopping and good ideas are the topic of my latest post on MyRACentral: "There was a plan. I was going to be done with my Christmas shopping by December 1 and spend the next 24 days being completely relaxed (about the holidays, anyway - I am rarely completely relaxed). Then something happened and I'm still a bit confused." You can read the rest here .
Post a Comment
Read more

December 15, 2010
Dear Throng of Able-Bodied People Emerging from the Elevator like a Herd of Sardines Escaping from a Tightly Packed Barrel, I have no problems with you using the elevators, really I don't. Especially parents of children in strollers, but the rest of you who feel compelled to use an elevator despite the close proximity of an escalator are certainly within your rights to use this miracle of modern conveyances. I'm not sure it's quite a human right (yet), but it certainly is a fantastic invention. I even don't have a problem - well, much of a problem, anyway - with being packed into such an elevator along a bunch of you with my face in butt height, having to lean over one armrest to make sure I don't make actual physical contact with your derrière while exchanging commiserating glances with the toddler in the stroller next to me. We are all equal in this world and there's room for all of us. Most of the time, anyway and I try not to gnash my teeth too loudly
5 comments
Read more 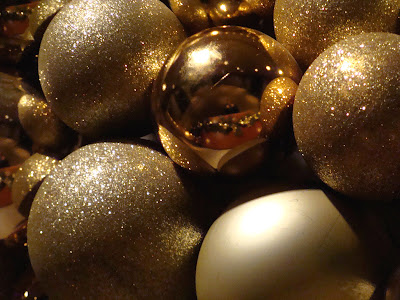 It's the first day of my 2-week vacation and I'm feeling silly. Hope you are, too. My comment box is your playground.
9 comments
Read more

When I lived in Denmark, I was a sort of linguistic chameleon. By which I mean that I had a habit of picking up the regional accent of whatever person I was speaking to. Saying it was a habit makes it sound as if it was on purpose. It wasn't, just happened – I’d start out a conversation speaking with the intonation of someone who's grown up in the suburbs of Copenhagen and within about 20 min. or so, I sounded like I was from Fyn/Funen or Jylland/Jutland. My osmosis with my conversation partner disappeared when I came to Canada. I just can't do accents in English - perhaps it is because my own is still so close to the surface? That is, with the exception of an Irish accent. There's something about the cadence of the Irish way of speaking that hits the same place as Fynsk (as in coming from the island of Funen/Fyn) - they're both lilting, musical sounds. Which is funny because I can't sing in key at all. And a sidetrack, but it's relevant. In terms of
8 comments
Read more 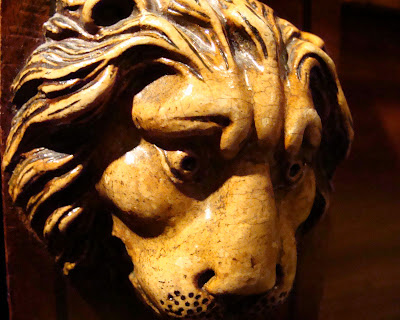 A week ago, something happened in my shoulder. I still haven't been able to pinpoint the exact time or act that caused the calamity, but the end result was a majorly crapped out shoulder, neck and arm. Complete with buzzing in certain fingers, jolts of sharp pain in my thumb and a seized-up neck, shoulder and upper back. Yippie, back to that. I upped the meds, slowed down a little and continued preparing for my table at the artists’ area at the International Day for People with Disabilities last Friday. Had ultrasound on Thursday, things were better and then, Thursday evening it all went Very Bad Indeed. It took me a couple of hours, but I finally faced the fact that being there on Friday would come with a significant risk of aggravating the injury to the point where I'd spend the next 2-3 months back in a place I didn't want to be. And so I canceled. Not unaware of the irony that I had to bow out of that celebration of an international day for people with disabilities
9 comments
Read more

December 02, 2010
The annual planning for the future has started on MyRACentral: "December of any year is traditionally the time where media of all kinds focus on what has happened in the past 12 months and if you read my Month Ahead post, you know that's coming. However, just to mess with tradition, I'm starting my posts this month by talking about the future." You can read the rest here .
1 comment
Read more 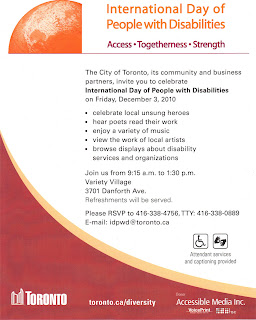 On Friday, I will be here (click to embiggen) Why don't you join us? More information here .
1 comment
Read more
More posts