Hello from the Disabled Side* 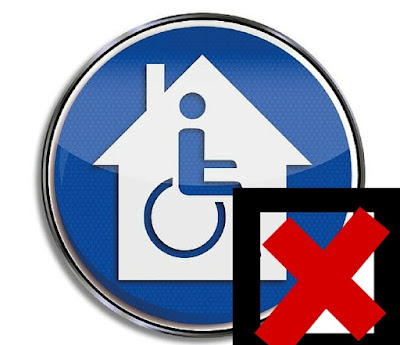 Like every other person in the world, I was really excited about your new album, and even more excited when I heard you were going to come to Toronto. Not just one show, for four shows! I took a look at the dates and decided that the Friday show would be perfect. You see, I had a plan. This was going to be a birthday gift to my sister. She still lives pretty far away and we don’t see each other often. Wemiss going out on the town together, and this was a perfect opportunity for some sisterly bonding.

I set aside some time this morning to get tickets. To maximize my chances, I started exactly at 10 AM when they went on sale and tried to book online, as well as being on hold with the Accessible Seating with Ticketmaster. I didn’t mention that? You see, I use a wheelchair and it's usually a bit of a trick to get tickets to popular events. Venues don't tend to have a lot of wheelchair seating.

If you’re reading this, you’re probably also wondering about the proportion of able-bodied seating to wheelchair seating and boggling a bit. You’re a modern woman — I’m sure you’re wondering why on earth the builders of the ACC assumed that people with disabilities don’t go out and have fun. What other reason could there be for such a paltry number of wheelchair areas?

Anyway, back to my story. After about half an hour, I managed to book tickets online and exactly for the date and section I wanted! Awesome! I had two tickets for the Friday show, section 309 (good seats, and fairly reasonable in price). I was already imagining the look on my sister’s face when I told her.

Yeah, if that seemed to good to be true, it’s because it was.

I entered all the information correctly, got a confirmation number, but there was also a message that there was a problem with my order. I got through the Accessible Seating line and asked them for help. They indicated that there was nothing in the order except a note to call customer service and transferred me.

After waiting on hold for another 15-20 minutes, I talked to a very nice man who indicated that I had been transferred to the US Customer Service by mistake. He transferred me to the Canadian Customer Service line and I spent some more time on hold. I finally spoke to someone at about 11:10 AM. They indicated that for some reason the system had not taken my credit card and my tickets had therefore been released back into the inventory.

!!!!!!!!! (I shall refrain from quoting the invective that ran through my mind at this point, substituting exclamation marks and leaving the rest to your imagination)

The agent tried to find others tickets for me and we expanded the search to all four days. No luck. The accessible seating had been sold out on all four days by 11:15 AM!

And then the site wouldn't let me submit an email ti Ticketmaster Customer Service. Argh!!

As you can imagine, I am absolutely furious. Due to a glitch in the Ticketmaster system, I lost my tickets. And because I was transferred to the US Customer Service by mistake, I lost any chance of getting replacement tickets. And! Because the Air Canada Centre has extremely limited accessible seating, I now have no chance to see your show.

And it’s simply because I need wheelchair seating. That’s the aggravating part. Because although I am sure that after an hour, almost all the tickets were likely sold,I am equally sure that had I needed a regular seating, that might be one or two tickets in the nosebleed section.

It stings. It stings rather a lot.

I do hope you enjoy your visit to my beautiful city and that your shows are everything you want them to be. And that you and the 80,000 people who get to actually go see your shows (only 250 or so of whom will use a wheelchair) will have a great time.

(* with thanks to my JA sis for that excellent title)

anetto said…
So the Air Canada has .003125% disabled seats!. I don't see how that is fair in any worldview.

Less than 1% by a very large amount

Alex said…
Your invectives are Danish. That makes them statistically 133% scarier, because man it's hard to piss off a Dane. :D
<3
11:16 PM