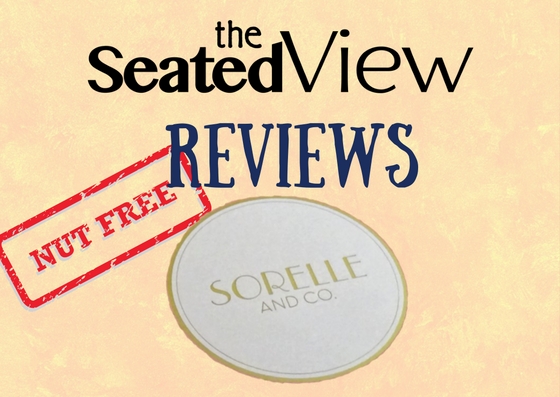 You’d think it would be impossible to make things that didn’t taste like sawdust if you have to accommodate multiple exclusions. And you’d be wrong, at least when it comes to Sorelle and Co in Toronto. 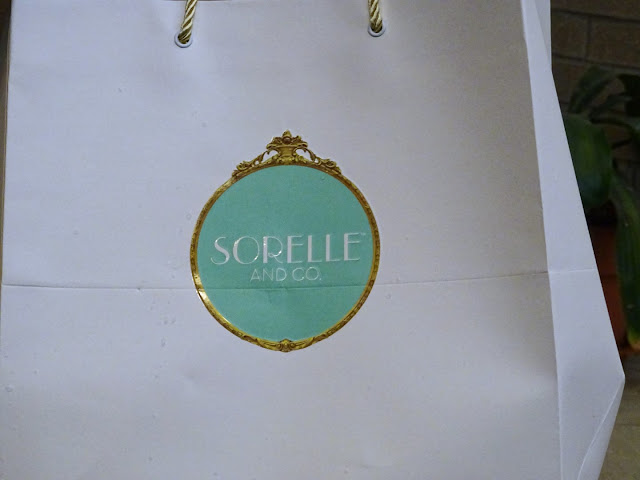 I’d never heard of them until The Boy came home one day and told me they’d opened up a branch in the Saks Food Hall near the Eaton Centre. I promptly checked out the menu. Then wiped drool off my keyboard. Not only are there delicious cakes and treats, but also some very yummy-sounding breads (Black Olive and Rosemary, Italian Garlic and I have to stop now before the keyboard short-circuits).

Secondly, having a bakery and restaurant so close to home that is both vegan and nutfree means that a vegan friend and I can actually eat in the same place without a) one of us dying or B) one of us compromising her ethics. 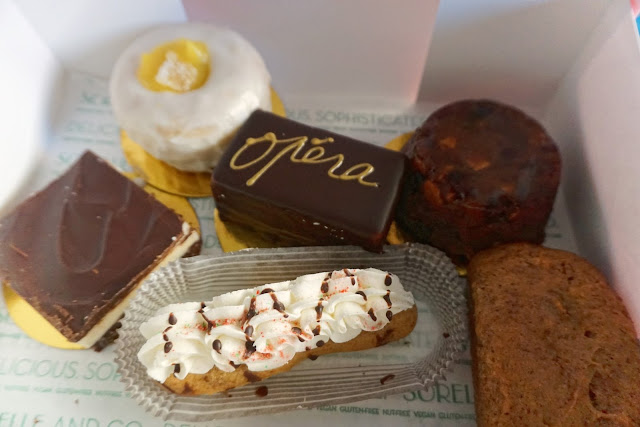 The day before Christmas, David and I went for our first visit. Unfortunately, it turns out that the location in the Saks Food Hall is not the restaurant, but a stall that focuses primarily on cakes, although they also had some seed bread and  granola. But that’s the only thing that is wrong with it. This visit was at the end of some serious Christmas shopping, so we were both hungry. And spent rather a lot of money. Because… Well, we had to try several things, right? And this past weekend, we tried a few other things. Because I wanted to write a thorough review. Right?

I did this for you guys! A-hem… 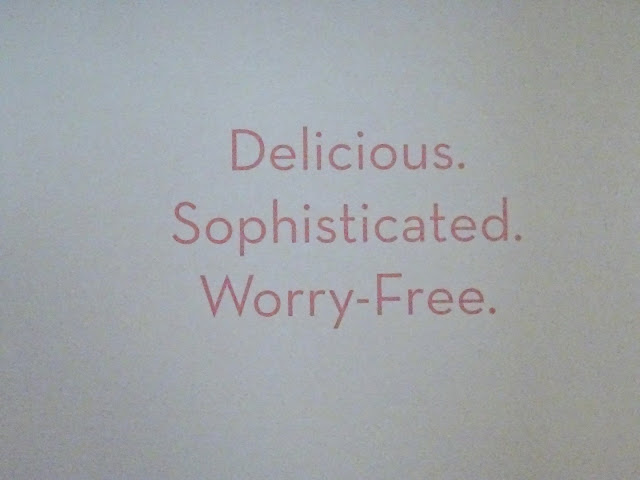 Sorelle and Co’s motto is “Delicious. Sophisticated. Worry-Free.” Do they live up to the motto?

Delicious. Oh, yes. Most of what we have tried has been incredible. Their doughnuts are wonderful (but best the first day). Having tried both the lemon and the blueberry-lemon, both of which were covered in a citrus glaze, I can highly recommend them. My absolute favourite is the spiced carrot cake (also available as a loaf). They have somehow managed to achieve the fluffiest, lightest carrot cake with a perfect level of spice and an amazing citrusy glaze. 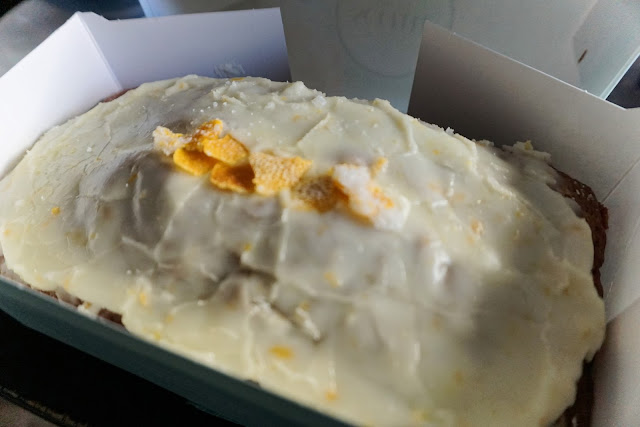 But it doesn’t stop there. There’s a brownie with a dense dark flavour, a Christmas pudding with the right mix of fruit, just begging to be drenched in brandy and set aflame. A Nanaimo bar that even I, who don’t like these things, think is yummy.

Another favourite is the seed bread. Dense and filled with seeds, the flavour is complex and earthy. Toasted well and slathered still-warm with your topping of choice — salted butter, honey, nut butters — it’s the kind of bread that makes you hum with delight as you munch your way through a slice. 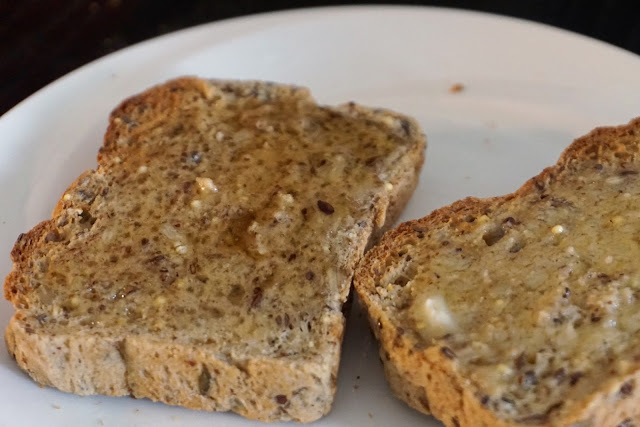 Only a few of the treats we tried have been of the sort we won’t revisit. The macaroons look incredible, but have little flavour and are heavy enough to leave a dent should you throw them against the wall. The icing on the eclair and the brownie is… Well, not to my taste. Consistency and texture is great, but the flavour is kind of odd. Imitation almond essence, maybe?

Sophisticated. And then there are the fancy treats. The ones that look as if they are right out of a Viennese bakery and you’re supposed to eat them with sips of tea served in a delicate china cup while listening to a Strauss waltz. The brownie is covered with tufts of icing and a scattered handful of silver balls. The opera cake is enrobed in a creamy ganache that sticks a little to the fork, just as it should. Again, the cake layer is fluffy and light, the mocha/rum )(?)-flavoured cream smooth and delicious, the raspberry jam a nice touch of freshness and did I mention that ganache? Initially, I thought it too rich for me, but in the weeks between the first and second visits, it was the opera cake I thought about. 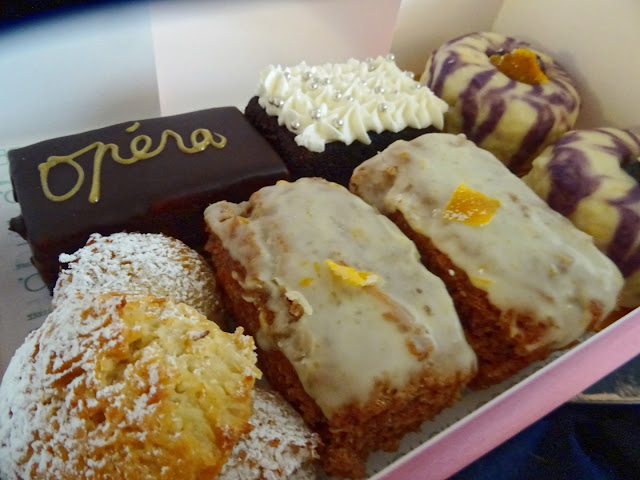 The look of the fancy traits and the custom-made cakes is incredibly sophisticated and absolutely gorgeous. A lot of thought and attention to detail has gone into the design, making everything look rich and sinful and luxurious. Subsequently, they are a bit expensive, but most of the treats are big enough to be shareable. Splurging on a couple  for sharing will make you feel spoiled and satisfied.

Worry-Free. Yes, at thousand times yes. Being able to eat anything and everything of the delicious offerings without thinking twice is not just a relief, but a liberating adventure of flavours and textures and eating like everyone else. 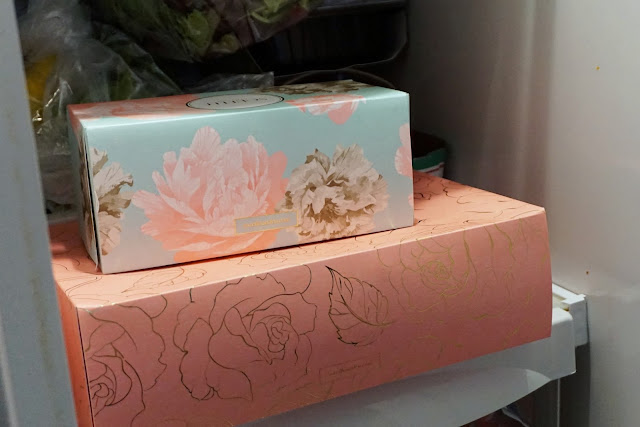 My only disappointment so far is that the promised restaurant and the extensive bread collection were not available at Saks Food Hall. But that just leaves room for more adventures. There are two additional locations — one in Yorkville (which I will be checking out in the moment the weather improves) and one in Vaughan, alas outside my range. But I have friends who have cars…
Nut free

Rick Phillips said…
Gosh that looks so good. I am doing a diet and being fairly successful. I meant before I read your blog. Now I am thinking of ordering. Pretty much order anything, but cream filled treats. Oh my!!
9:25 PM