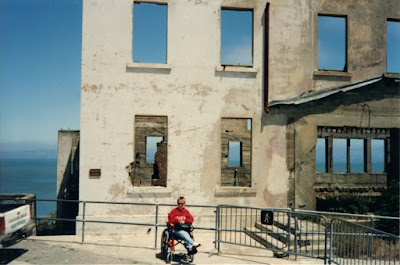 Alcatraz, 1992
At some point in the ICU, I had a transcendent experience. Buzzing with excitement, I waited for The Boy to arrive for his daily visit and then told him all about it. That as soon as I was better, the first major adventure we were going to have was to go to Giraffe Manor.

Do you know about Giraffe Manor? If not, you simply must click that link. It’s a hotel in Kenya that’s has a herd of domesticated giraffes wandering about the grounds. Giraffes that stick their heads through the windows and steal your breakfast!

I’ve wanted to be a game warden in Africa ever since I read Born Free: A Lioness of Two Worlds

as a little girl, but for now it’s fairly obvious that this job option is going to have to wait until my next life. The photo safari, too, because the savanna isn’t too accessible. But there it is, Giraffe Manor, and it is at the very least partially accessible!

So, anyway. The reason that we were going there was because I’d discovered a shortcut. Yes, lying on my rear end in the ICU, I had found a shortcut requiring us to only drive for a few hours instead of flying for fourteen. And I could easily see me building up enough strength to withstand a couple of hours in a van with the help of some heavy painkillers.

You see, I haven’t travelled for a very long time. I used to travel quite often, both before we came to Canada and after. And then about 20 years ago, that stopped. I didn’t have the money for it or know anyone who could go with me. And then after my big flare, I couldn’t anymore.

Well, I like to say that I can’t travel “at the moment.” It’s less final. And you never know what will happen in the future, right?

My body is so wrecked that I can’t sit in something other than my power chair, precluding transferring into anything but a first-class seat on a plane (and who has the money for that?). Given how much trouble I’ve had finding a new bed/mattress, I don’t want to think about the pain I’d experienced in a hotel bed. And then there’s the food allergies, which could make travelling a little unnerving.

It took me two years to build up enough stamina and strength to last year travel in a van for 40 minutes when I went to see wheelchair rugby at the ParaPan Am Games. And these days, I’m working on building my strength back up so I can go to the Toronto Zoo and go nuts with my camera.

I miss travelling. I have dreams of places I want to go, a fantasy list of places I’ll be visiting when my “temporary” inability to travel resolves. And I use the term fantasy advisedly, because I know that’s what it is. To say that I’m okay with it is a big statement. Rather, I’ve accepted it. Travelling is very likely not something that’s going to happen until that next life I mentioned. Hence my excitement at having found the shortcut to Kenya. It was a couple of days before I realized that this was a medication-induced dream.

I’m still really disappointed about that.

Instead of planning my own trip, I let others be my proxy. I follow travelling accounts on Instagram, and watch YouTube videos from all over the world. And part of me travels with my friends when they hop on a plane and go to different countries and I make them tell me all about it.

And that’s enough. I make it be enough.

And then September 15 happened. My dear friend Ken went to Iceland at the beginning of this month and despite not being big on recording his adventures photographically, he’s posted a lot of pictures from the trip. Which made me want to go to Iceland very, very much. But again: not very accessible.

On the 15th, he went from Iceland to Denmark.
I am so very happy that my friend will get to see where I’m from. I love that he’s going to taste the food, get to know the people, smell the ocean, and immerse himself in my culture.

And I am so very desperately sad that I don’t get to do it with him. Because we’ve talked about that for years — seeing Denmark together. And my body had conniptions and it became impossible. He’s going to bring me back Danish salted licorice, which is very exciting. Really, I can handle this.

That is, until I saw a wonderful photo of him with my oldest sister-friend in the world, AB. And I wasn’t in it and it wasn’t because I was the one behind the camera.

I haven’t cried because of something I couldn’t do for a very long time. Because there is no point. It doesn’t change anything, only makes my nose stuffy, my eyes red, and all of me feeling general crappy. I know the theory of “a good cry,” but they are never good for me.

But that day, I cried.

You can think you’re fine, spend years knowing that you have come to accept the many losses that rheumatoid arthritis imposes upon you. And then, out of the blue, the searing pain pops up its nasty little head and you have to grieve it all over again.
Chronic Illness Disability Friends Grief RA

Judith said…
Lene, I teased you with this on Facebook a few weeks ago, but if you want to go to Africa, you can, any morning between 9 am and noon (for now, they might shift the times slightly soon). Just like being on a private safari! With giraffes (not every day, but quite often.) You can find the website at:
http://www.wildsafarilive.com
Or on Youtube at:
https://www.youtube.com/watch?v=KF47Za1lfjM

Please try it! If you go to the website outside those hours you can pick the Djuma waterhole camera for a live but stationary view.
10:49 AM

Rositta said…
I am sad to read this. I know that I still live to travel and I'm not sure what I will do when I can't anymore. This was the first year in ten that we've had to cancel our two months in Greece because of a cancer diagnosis. I have been miserably and waiting unhappily for surgery.
5:03 PM

Rick Phillips said…
Lene, I love Alcatraz. I have been 4 times and would go again tomorrow if I could. In fact, San Fransisco is one of those 3 -4 cities I just adore.

Now I bring this up because as thankful as I am to have gone, I am still sad I am not there this evening. I love to travel.

So what's the point of my discussion? Just this, sometimes no matter what we, do it is never enough. But doing it once is the best. I hope you get all your travel dreams. As for me, I dream of Alcatraz.

Anonymous said…
Lene: This post almost broke my heart. It's one thing to go on about daily life with RA and it's quite another to stop and realize exactly how much life that RA has taken from you. Thank you for such a heartfelt post.
4:35 PM