High Anxiety and Jumping in the Deep End 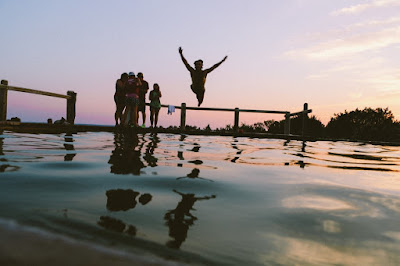 I have lived with anxiety since I was a child. My first memory of being really anxious was the first day of Grade 1. I remember the red dress I was wearing. I remember being one of only two students who could read the sign with their name on it on one of the small desks. And I remember being on the verge of throwing up all morning. Because anxiety always hits my stomach.

Part of the problem is that I have a vivid imagination and it occasionally veers towards catastrophizing. Another reason is having lived with an unpredictably capricious disease for fifty years. Never knowing how you’re going to feel tomorrow, or if you’re going into the hospital, or if the damned RA is about to do a clog dance on your joints makes for a great deal of uncertainty in life.

And it could be argued that we all have a great deal of uncertainty in our lives, but my rebuttal is this: when you are a generally healthy person, your illusion (a bit of an oxymoron) that everything will be fine is a lot more solid. You have days and months and years of waking up feeling more or less like you did when you went to bed. Some people have never unexpectedly had to leave everything they knew to go into a hospital filled with mean people. Because that’s how a child’s mind interprets medical tests and needles and not getting tucked in by her mom at night.

I got some counselling a decade or so ago. It wasn’t the first time I had counselling, but this one really worked. Cognitive-behavioural therapy was the one that taught me to talk myself down when I spin into a worry spiral. And everything was fine for a while.

And then six months ago, I woke up in the ICU with a tracheostomy.

Thankfully, happy pills were de rigueur in the ICU, but not so much once I got to the regular ward. And that was when things started getting unnerving.

Not being able to talk and being left largely alone with only a call button that sometimes didn’t get answered for quite a while was not reassuring. Having a trach and being attached to an oxygen hose wasn’t fun, but at least it was a guarantee you could breathe. Once I started weaning off the trach, I learned that every single step of the process was engineered for anxiety.

There was going without the oxygen, residents rooting around in my throat with no anaesthetic (not as awful as it sounds), learning to eat again and my swallowing muscles not being in tiptop shape. Going home after feeling safe(ish) was worrisome. The Boy leaving after that first week to let me fly on my own was scary.

At some point in the process, I developed a bit of a mantra.

Sooner or later you have to jump in the deep end.

It is my philosophy of dealing with what scares me distilled into eleven words. Don’t get me wrong, there’s a fair bit of flailing before I get there, but eventually the only way to not have anxiety being in control is to stop running, turn around, and face it.

In the novel Dune

it’s phrased more poetically. This is the Litany Against Fear:

"I must not fear.
Fear is the mind-killer.
Fear is the little-death that brings total obliteration.
I will face my fear.
I will permit it to pass over me and through me.
And when it has gone past I will turn the inner eye to see its path.
Where the fear has gone there will be nothing.
Only I will remain."

I’ve written before about adapting that first line — “I will not fear” works better for me. It reflects the act of will it is to beat back the anxiety, to turn around and face the monster, and to deliberately walk towards it, forcing it back.

Were Frank Herbert (the author of Dune) still alive, I’d also take issue with him about there being nothing when the fear is gone. Every time I turn around to face my fear, there is most certainly something left. Not of the fear, but of the courage it took to face it and force it back. It is like a small smooth pebble shining in the darkness. And because there is a reminder of that determination in so many places within me, I have faith in myself that I can do it again. It never gets less scary, but I know I can do it and I know how to do it. 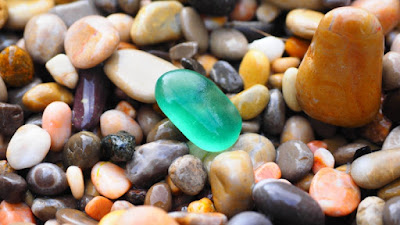 At every new step in the trach weaning process, I would freak out for a while and then eventually say — writing it down, mouthing it at David, or, when I got my voice back, doing so out loud — my mantra.

Sooner or later, you have to jump in the deep end.

Unless you prefer living your life curled into a fetal position and gibbering in a corner, there is no other way. At some point, you have to take a deep breath and jump. All the while hoping your faith that everything will be alright is based in something real.

And every time it turns out okay, another small pebble appears and joins the others, showing the long path out of the darkness.
Chronic Illness ICU Juvenile Arthritis Learning Life RA Thinking

k said…
"Some people have never unexpectedly had to leave everything they knew to go into a hospital filled with mean people. Because that’s how a child’s mind interprets medical tests and needles and not getting tucked in by her mom at night."

Except for the mom part, that's pretty much how I feel about hospitalizations too. And it's funny; my mind remembers it as "I will not fear."