March 14, 2011
For months now, we've had tickets to see the Kodo drummers on March 11 (there's a fantastic video on their site and a wee doc here). There were seven of us, some had seen them before (it was to be my third time) and Michele’s boys would experience the magic for the first time. 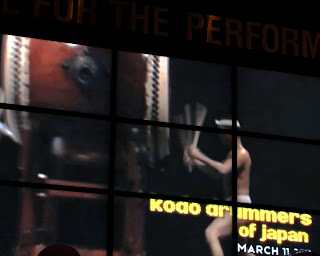 And then Friday morning happened. The massive earthquake, a devastating tsunami and we wondered if the performance would still be a go. No one would blame them if the disaster in their homeland would make the drummers focus elsewhere, but it wasn't cancelled. We stood - well, some of us did - before it started, in silent acknowledgment and love for everyone affected and then the beat began. 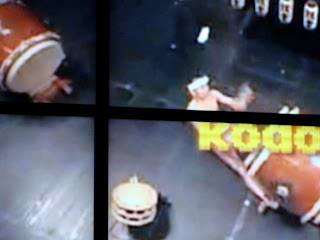 Somehow, it was more profound. It was as if they drummed their all, sent every emotion of despair, of loss, of worry, sadness and hope into every single beat, lifting themselves and us into another world. It was like being the drum, the beat no longer a result of human pounding on skin, but an elemental and primal sound that bore witness, gathering up all everything they and we could give and sending it all the way from Toronto to Japan. 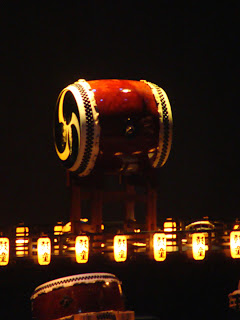 Anonymous said…
My kids are involved with the Taiko club at school....that show must have been incredible!

My heart goes out to Japan....I hope that the nuclear issues are resolved soon...no one is concerned that they were ill-run, AFAIK, it seems that there is always something worse than we can plan for!

The most heart-wrenching photo for me was of a tiny boy being scanned by a man in hazmat, for radiation exposure.
5:23 PM

Diana said…
What a beautiful tribute. I spent 2 1/5 years in Japan, it is one of my heart homes, and my heart is aching so for those there.
5:43 PM

Anonymous said…
You made me cry.  I was incredibly lucky and, at the last minute, was given tickets to see the Kodo drummers when they were here just last month.  That pretty much made me cry, too.  What an experience.
9:56 PM