Tuesday, November 29, 2005 was a rainy day. The sky was covered in clouds, shades of grey ranging from pearl to light charcoal. It was raining most of the day, but warm enough that if you’re of Viking/East Coast heritage, you could go out with just a light jacket. Normally on days like that, people get pretty cranky, but I woke up with a sense of optimism and possibility. I had no idea why at first, but then, at 11:35am, your dad called me and told me that it was to be your birth day and then all the hope and happiness inside me made sense.

We have talked about when you’d be born, guessing, hoping, thinking of days already with special significance, of how cool it would be if you were born on this day or that. And you showed that already, you are very much an Andersen-Biggs combination of uniqueness and insistence on doing things your way (and as fast as possible). You chose your own day to be born, completely ignoring any requests or urging to stay inside a little longer. And then, just as everyone got behind the idea, you did what the whole family does when something is expected of them: you did the exact opposite and slowed right down. Nobody tells the Andersen-Biggs clan what to do!


Your mormor went to be with your mom and dad – you were too far away for me to get there, but I gave mormor my digital camera and a pile of quarters, with strict instructions to call me often with updates. And then I paced grooves into my floor for the rest of the day, my body in Toronto, but the rest of me with you.

Your dad was a tower of strength, supporting your mom in the hard work she was doing and your mom? Your mom was a warrior, a woman to be reckoned with. You chose well, when you chose these two as parents.

I wanted very much to write you something special today, but ever since I got the news this morning, there has been nothing in my mind but stillness and the word “wow”. My heart is brimming over because of this: you are here.

If you ever need monsters slain, I’ll be your champion.

This is the last picture of Janne and John before they became parents (pardon the fuzziness - mormor was new at the digital camera thing): 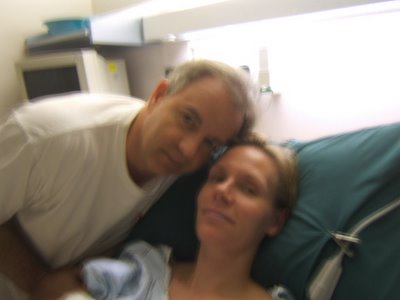 Liam (which apparently means "he of the ginormous hands and feet"). The bruise has simmered down since this was taken: 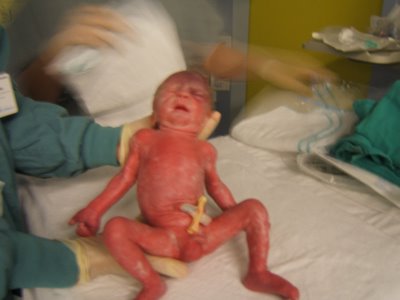 And Morgan, who is already showing signs of inquisitiveness (and who looks like her mother): 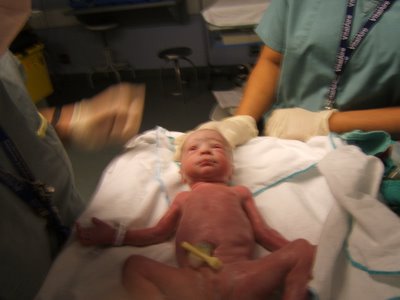