August 30, 2016
In the fall of last year, Laurie Proulx from the Canadian Arthritis Patient Alliance (CAPA) wrote a guest post for The Seated View about their new project on pregnancy and parenting with arthritis, of which she is the lead. She introduced the survey and asked my readers to help provide information on these topics. Today, Laurie is back with the result of the survey. Take it away, Laurie! 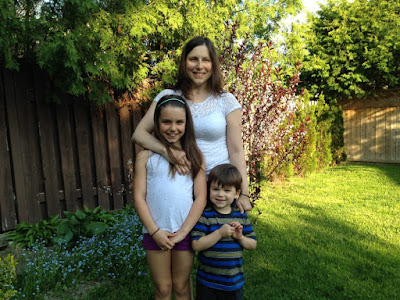 Laurie with her children

I have lived with Rheumatoid Arthritis since I was 14 years old so I’m a veteran of this disease at the age of 39. It greatly affected my life in so many ways – from participating in school/university, socializing and even deterred me from a career in piano/music since the RA affected my hands so significantly. I soon learned to advocate for myself as a patient to ensure I received the best care. I quickly learned that if I didn’t manage the disease, it would manage me. Through this personal advocacy, I came across the Arthritis Patient Charter. It sparked something in me - I felt empowered yet wasn’t sure where to direct these energies. Years later, I joined CAPA and became a member of the Steering Committee. CAPA is a grass-roots movement made up and for patients living with arthritis. We’re involved in a wide range of forums to ensure the voice of the patient is heard such as research, drug policy, increasing awareness and helping out individual patients. The voice of the patient – as provided through CAPA – is very much needed to help guide policy makers in making the right decisions.

Why was it important to CAPA to undertake a survey about pregnancy and parenting with arthritis?
As people with arthritis know all too well, arthritis affects people in their prime of their lives. It only follows that pregnancy and parenting are issues as well. Since becoming a parent, I’ve had to overcome so many different obstacles and challenges. The survey was really designed to get a better sense of the concerns and issues from people with arthritis and to give them a voice in bringing forward the important issues.

The issues begin before pregnancy when a person needs to consider the effect of medications we take on the baby. Unfortunately we don’t know as much as we should. The pregnancy and parenting with arthritis survey indicated this same concern from the broader community of people with arthritis - 88% of respondents indicated a high need for information about medication safety during pregnancy. This prompted me to write an article for The Mighty where I highlighted the Stress of women with Rheumatoid Arthritis during pregnancy and showcased the survey results.

What were some of the major findings?
The survey highlights many of the issues I expected for people living with arthritis when considering or planning pregnancy or raising children. There was a general decrease in importance of the topics from planning/considering pregnancy to the latter stage of parenting older/adolescent children. This could represent greater confidence in undertaking the parenting role while living with the challenges of arthritis, as well as the fact that the needs of the children are higher when they are younger.  The top issues, regardless of parenting stage include:

In general, the results of the survey indicate that patients have a high need for information when considering pregnancy and in carrying out their role as parents. Unfortunately, access to and reliability of this information is lacking. For example, access to certain information was low in some situations (such as Motherisk) while the quality of the information was identified as high. These results highlight that we need to be doing more to promote the resources and high quality information that does exist.

Was there anything that surprised you?
One thing that did surprise me is that people were not as concerned with getting information on the risk of passing arthritis on to their children. The people who responded to the survey still seemed concerned about the issue - 78% who were considering pregnancy or pregnant identified it as an important issue – but the concerns reduced over time where only 44% rated is as an important issue when parenting older/adolescent children.

What is CAPA doing with the results of the survey?
The survey results will be used to create an educational resource to assist people living with arthritis when considering pregnancy and in carrying out their role as a parent. Based on the survey results, we will initially focus on building the content for pregnancy and earlier stages of parenting. The resource will be web-based since most people who responded to the survey indicated this as their preference.

Thank you so much Laurie for sharing these results with us. If you want more information, contact Laurie at laurie DOT proulx AT arthritispatient DOT ca.
Arthritis Pregnancy & Parenting RA

Delia said…
Thanks for doing this, Laurie. It was a huge leap of faith for me to have a child so I know that this information will be extremely valuable to young prospective Moms.

i am here to share my testimony on how i conceived my baby. i have been married to my husband for 14years without no issue.i had problems with my in-laws even my husband started to have new affairs aside our marriage. it was a very terrible thing to bear. i became a laughing stock among my pear, i prayed and fasted and nothing happened. i was now seen as always unhappy.i was even ready to pack out of my marital home and stay on my own because my husband was not given me any attention that i needed from him. i decided to focus on my job and try to live happy on my own. on this faithful day, i decided to check the internet for updates on healthy living and i came across a story of a woman called mercy, saying that Dr Udabor helped her to conceive a baby. i decided to give him a try because this has been my greatest problem in life. today i am a proud mother with a son. words will not be enough to explained what this man did for me.i am a happy mother,i know there is someone in same condition and you feel there is no way. i urge you to contact him. This is the solution to every single mother around the globe. distance is not a barrier, he will surely make your dreams come trough.