October 28, 2013
Between the damage from the big flare in 2004, as well as acquiring fibromyalgia around the same time, a number of interesting twists have been added to my life, the main one having become ridiculously sensitive. A millimeter’s worth of change can throw me off completely, triggering a cascading fibro flare with all its attendant wonder of symptoms. Change isn’t the only thing that does it, it can also be stress or physical strain and inevitably, it feels as if something really major has gone wrong with the way I’m sitting in my wheelchair. That usually brings along the aforementioned wonder of symptoms, which in addition to pain, includes a healthy dollop of anxiety. Half the time, it feels like I’m crazy and I’ve gotten used to it. I know that when something’s been done to my motors requiring me to sit with the back half of the chair lifted up in the air, I’ll feel like I’m sliding out of the chair for the next few days. Traveling more than 10 minutes in a van or bus means several days’ worth of feeling like I’m sitting on cement instead of a foam cushion. And so on. The anxiety enters the picture because my body is constantly sending out an alarm, blaring IT’S WRONG! SOMETHING’S WRONG! WHOOP, WHOOP, WHOOP!! I know it’s my body having a reaction, but it’s still really freaky.

Last Friday, one of my attendants leaned on the right upper half of the back of my wheelchair while assisting me with something. She’s done this before. In fact, she is done this a couple times a week for years and nothing’s ever happen. Not that day, however. Last Friday, I could feel the back of the chair give and move as she leaned down and when she stopped, the back of the chair moved forward again. This was rather alarming. I spent the next several days being absolutely convinced that the back of my chair was wonky, that somehow this had caused a very solid shell upon which the back cushion is placed to warp and recline further on the right. Naturally, this event also triggered a massive fibro flare, which caused the kind of pain I haven’t experienced in a long time. In fact, it was so bad I felt like crying and I don’t often cry because of pain.

I did a lot of looking at the back of my chair when I wasn’t in it, as well as looking for old photos where I could see that area of my chair with me in it. Nothing seemed different. Still, it felt as if I was constantly sliding out of the chair and my right shoulder didn’t feel is supported as I was sure it’d been before. I started thinking that perhaps it was the fact that my left foot rest had slid down about a millimeter and gotten stuck, but that’s happened before and this didn’t feel quite like that. This felt very much like my right shoulder wasn’t right and when my shoulder isn’t right, my neck gets very unhappy, too. This wasn’t helped by the fact that the way I leaned my head on my headrest also seemed somewhat wrong. I looked again and again and again and could see nothing. I got The Boy to take a look and he couldn’t see anything different with the chair, although he did say that my left shoulder seemed further down than normal. Still, with nothing obviously wrong, it had to be my body. Right?


By about Tuesday, I’d adapted and although it still didn’t feel quite right, the pain was less and I’d convinced myself it was either the foot rest or the usual: that I was crazy (i.e., my body was having conniptions). Nonetheless, I decided to go see Dave the Wonder Repair Guy to get the foot rest dealt with, as well as another couple of small things. While I was there, I’d ask him about the back of the wheelchair. Just for peace of mind. He knows that my body often has hysterics, so I don’t feel so
After about 20 minutes in the van — and these trips are very, very important, so the pain of the feeling leader will be worth it — I get there and my foot rest was attended to. It takes a while and it’s obvious that this is just a stopgap measure — I’m going to have to bite the bullet and buy a new one. Did you know that a new foot rest costs $400? No, that’s not for a pair of them, that’s for one foot rest. I may have mentioned that having a disability is really expensive…
crazy when I talk to him about it.

One of the pleasures of going out to the shop is driving up the Don Valley Parkway, a highway in the middle of the major green space in Toronto. There are times where if you squint enough to blur out the Hydro lines and the occasional glimmer of a building, you can imagine what this area looked like 2-300 years ago. Nothing but forest as long as the eyes can see. Beautiful and stark at the same time. 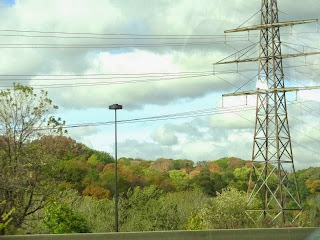 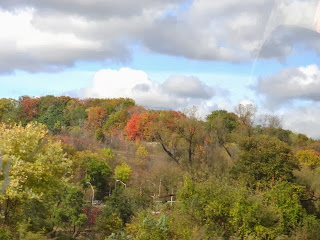 After about 20 minutes in the van — and these trips are important enough, so the pain afterwards is worth it — I get there and my foot rest was attended to. It takes a while and it’s obvious that this is just a stopgap measure. I’m going to have to bite the bullet and buy a new one. Did you know that a new foot rest costs $400? No, that’s not for a pair of them, that’s for one foot rest. I may have mentioned that having a disability is really expensive… 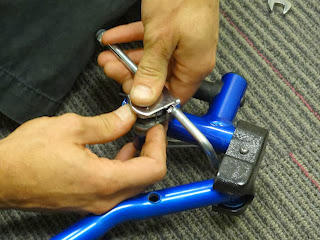 And then I mention the thing with the back of the chair, how it felt like it moved. Dave’s eyes get that  alert look they get when he listens to my description of how the chair feels and immediately makes the connection to something being wrong. He then tells me that there’s probably a bolt loose.
And this is why I love the man: because he makes me feel not crazy. He takes my vague description of something that feels somewhat wrong in the chair and says “that’s probably this.” And he’s usually right. Also, he never looks at me as if I’m out of my mind when I talk about how a change of 1 millimeter has completely wrecked me.

Anyway, back to the bolts. 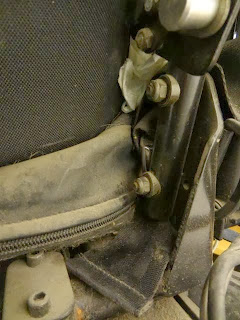 See these two bolts? (While you’re seeing them, please try to not see the dust and dirt) There’s a pair of those on either side of the back of the chair, about in the middle between the top and bottom. What happened when I felt the back of the chair moved was that the pair of them used the top bolt as a pivot and the bottom one gave way. “Wow,” Dave says as he goes to tighten them, “that’s a lot looser than I thought it would be.”

The good news is that nothing catastrophic would’ve happened — there just would’ve been more give in the back of my chair than there should have been. The extra good news is that he tightened all four. And a few minutes after he did that, I could feel a whole lot of creaking and shifting in my neck as it readjusted to sitting in a much better position.

Of course, I had higher pain levels in the next couple of days as my body adapted from sitting wrong to sitting right. This time, I could calm my anxious body down by reminding it that it was right. Something had changed, but it was for the better.

L."Wren" Vandever said…
Wow, Lene! Of COURSE you're not crazy--your body is just extremely sensitive and knows when something's not right. I can understand completely how upsetting it could be to know and yet not have any way of confirming it!

I'm also stunned at the cost for replacing the foot rest. Are you responsible for the entire amount, or is there some help from insurance, etc?

I hope Regan behaves herself from this point on, m'dear. In the meantime, I'm sending calm and some extra smiles your way. :D
11:23 PM

LynnM said…
Hans Christian Andersen could update the fairy tale, replacing the pea with a loose bolt.
5:57 AM