This one started building in early December. Christmas shopping was in the air, it was cold enough that you could see your breath as you walked down the street and Tiger Woods had been caught with his pants down. Well, more specifically, with his car plowed into a tree, which led to a much more salacious situation of which we have all heard more than enough. I mostly ignored the thing about Tiger until the day I clicked by the Toronto Star to see a bright yellow banner, with a "Breaking News" red line at top.

Had a world leader been assassinated? Had there been a natural disaster? Nope. I was so mad, I saved a copy to my hard drive, thinking I would rant about it later: 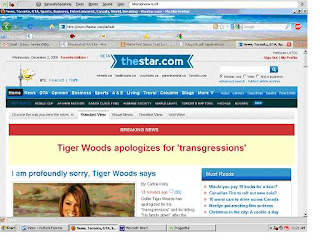 WTF? Tiger Woods making a statement about his personal life now qualifies for this level of media response? Are you kidding me?? How on earth is this news, never mind urgent, breaking news? Anyway, I rented to a few friends, the moment passed and although the irritation remained, muttering in the background of my mind every time another headline blared about Mr. Woods’ personal life, I mostly got on with my life. Until these last few days following his sort of public apology and that's when I boiled over again.

I've ranted on before about the how I don't believe what public figures do in their private lives is any of my business. More specifically, I don't think that a politician’s extramarital affair affect his/her ability to do their job, unless they have campaigned or frequently speak about a philosophy of the sanctity of family values. Still, I may be able to see how some could believe it relevant to said politician’s moral integrity (although I'm pretty sure I could talk them around to my point of view, but that may be my megalomania showing). However, Tiger Woods plays golf. He makes his living because he swings around a stick and hits a little white ball really well. How on earth does he owe anyone but his wife an apology?

And I know people out there consider him a "role model", although I fail to see how he can be a role model in any respect outside of people who enjoy golf. I saw a comment on a news story where someone summed up this prurient public response to any remotely famous person transgressing in their private life: "we have questions. We deserve answers". No, my friend, you do not! You have no relationship with this man beyond being a fan of what he does at work. Being a fan of what he does for a living does not entitle you in any way whatsoever to an explanation for what he does when he is not working. Regardless of whether he plays golf, acts or is elected to the government (with aforementioned family values-related exception), no one but a spouse is "entitled" to any sort of explanation or apology when marital vows are broken. I don't care who he sleeps with or what colour underwear he prefers (I will never get this latter item out of my head and I resent it deeply), I only care about his ability to play golf. Well, I actually don't, as I don't follow the game, but you know what I mean…

What is it with this requirement for public figures to be saintly? I remember once reading that everybody in the White House press corps knew about JFK and a certain was it an intern? Actress? Who cares, the point is that none of them said or wrote anything about it, because it wasn't relevant to his ability to do the job. Why has the line between work and private life blurred so much in the past 40 years that we, the unwashed masses, actually feel entitled to an apology when someone like Tiger Woods cheats on his wife? I can't possibly be the only person who thinks there's something wrong with this picture.