International Day for People with Disabilities

I got up before the crack of dawn to a rainy, blustery day and had built in some time before I left to allow for crying because it's just uncivilized to get up before the sun. I'm an Ahrtiste, dahlink and a night owl and it just wasn't pretty. 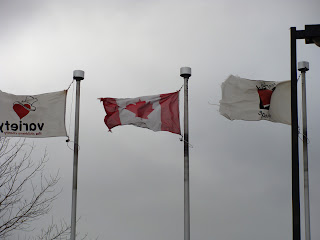 The day started of promising. I'd booked Dignity - a sort of taxi - as I wasn't in the mood to rattle around on WheelTrans for hours and we went straight to Variety Village where I was meeting David who'd signed up for minion duties for the day. I got off the van and the driver told me it was going to be a certain amount. I mentioned that the office had said it was $10 less when I booked the ride and he got out the run sheet to prove it and…. showed it to David. Aside from the fact that the booking sheet showed that I was right, it was a moment of rather stunning stereotypical behaviour, so appropriate on this day. I was the one who booked the ride, I was the one in the van, I was the one paying the man and yet? David's the one who needs to know what the booking sheet says. Sexism? Ableism? A double whammy?

Once inside, the day started with a welcome speech by David Onley, the Lieutenant Governor of Ontario, the first in a job with a physical disability. He spoke of going to in the 1970s and seeing curb cuts and automatic door openers for the first time, realizing how difficult it was to get aroundToronto when he came back. And then he said that there are young adults who can vote now who have never known a world without the blue sign with a grey wheelchair denoting accessibility, never known a world without automatic door openers and ramps and it was one of the most thought-provoking moments of the day (if not the week). I often rant about lack of access and I am convinced that the world can do better, but it was a moment of realizing how far we have come. 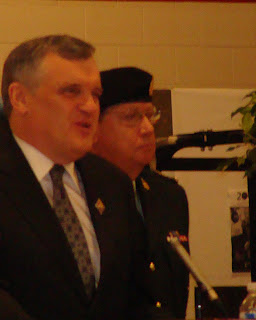 Some members of the audience appeared to not like the speeches 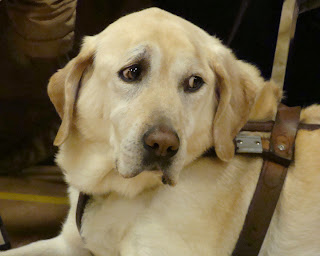 Seeing as the event, including speeches and exhibits took place in the gym of.Village, exhibit space was improvised, but it worked and for those of you who are here because you picked up my card yesterday, welcome! 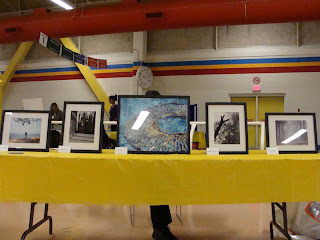 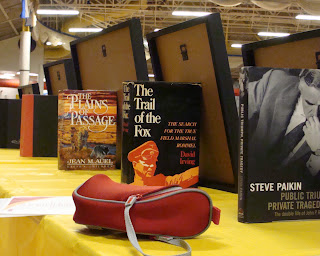 and the backstage view. My mother has always claimed that within half an hour of being somewhere, I tend to inhabit the place. I think I see her point. 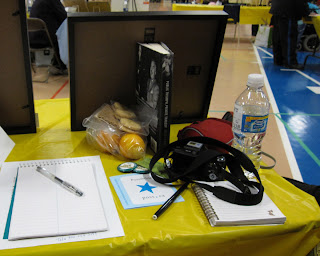 It was a terrific day, I had a lot of fun, learned some things, met so many nice people and got enough compliments on my photos that - to paraphrase the Grinch - my head swelled three sizes that day.

Choosing a winner was hard - I've been giggling my way through the comment box for the last couple of days I can't even begin to give you a list of favourites, because they're all good. However, Willowtree’s "I still can't hear you" made me snort tea up my nose and that's as good an indication as any. E-mail me at landers5ATgmailDOTcom with your choice and address and I'll get it in the mail for you as soon as I can. Given that you're in , it may not make it before Christmas, but it will definitely be on its way.