Have you seen the Cadbury eyebrows comenrcial? No? Go watch – it’s veru funny. BUT! And you knew there’d be a but, didn’t you? A Glass and a Half Full Productions? With a glass of milk graphic?? So in other words, giving your kid a Cadbury chocolate bar is like giving them 1 ½ glasses of milk and are they seriously trying to sell that message? Is that even ethical? Hrmph! Still, the commercial’s damn good…

Perspectives. Endlessly fascinating. There are cameras by the nests of different birds, animal borne cameras showing you the perspective of another species and I’m going to stop talking now so you can go see.

Never knew there were scholars fighting about fairytales. You learn something new every day.

DavidG sent the list of names. In case you’re looking for options to some of the more common baby names. Also, Rutland Weekend Television which was new to me, but quickly sucked me in. Hard to choose favourites but The Birth of The Rutles was pretty good, as was Gibberish. For the cat lovers, the Human Cat Perch. The City-wide Rick Roll and a test called Cheese or Font (I somehow got 58.2% and discovered that despite being lactose intolerant, I’m good at cheese names, but have no clue when it comes to fonts)

Trevor sent the link to a message from grateful women and another one about dangerous biscuits. Also, an email from someone feeling very strongly about fruit filth and a mother on the edge. A rather epic cluelessness from a banking institution and a story about how a monkey expressed to a political leader what many of us may have secretly wanted to do. And arse ropes.

Moving on to knitbloggers... Marianne sent me this link (NB: perhaps it would help if I added that link - thanks Carrie for the first alert and Marianne for leaving it in the comments) to a story about making a positive out of an extremist reaction. Like she said, nice twist. Back to cats and the 10 Cutest Cat Moments discovered over at kmkat’s (great - now I have kitten fever), where I also found out what my Pirate Name is (despite missing ITLAPD)

My pirate name is:

Even though there's no legal rank on a pirate ship, everyone recognizes you're the one in charge. Even though you're not always the traditional swaggering gallant, your steadiness and planning make you a fine, reliable pirate. Arr!

Get your own pirate name from piratequiz.com.
part of the fidius.org network

And while I’m talking about kmkat, I’d like to introduce you to George. 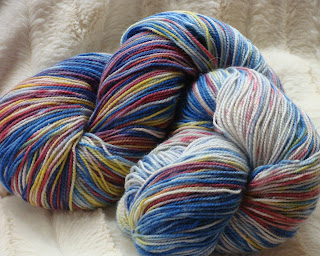 Here seen snoozing on the most decadent throw I’ve ever encountered (birthday present from Ken who always knows what I need, because I’m telling you, this blanket? You need), George came to me from kmkat after I left a comment on her birthday post (Happy birthday again!). I hadn’t even realized there was a contest involved - I believe the comment was left late at night or at least it felt like it - so imagine my surprise when I got the email. Kmkat suggested that since I don’t knit anymore, I could pet it and call it George, so that’s what I did. He’s got a pretty special history, too. I’d forgotten a little what it’s like to hold good yarn. I miss knitting, but having George is a pretty decent substitute.

Have a happy Monday!