Some people can be social smokers, some people can’t. When I quit 2 ½ years ago, I knew it was forever. That I could never as much as have one more drag, because… well, here’s a hint. Although I generally am not much affected by cigarette smoke when I pass a smoker on the street, it’s all in my head, pure willpower – I’ve told myself I don’t like it anymore, hence I don’t like it. When caught unawares, however, it smells like heaven. I’ve been known to follow (subtly, y’understand) someone down the street, taking a few sniffs of second-hand smoke. My addiction is always lurking, waiting to pounce. I either smoke or I don’t. All or nothing. One drag will be my undoing and I will be sucked back into the pit.

When Stephanie, Juno and I met for my inaugural blogmeet, Steph showed me a ball of Trekking sockyarn. I couldn’t let go of it. I even petted it, without being aware that I was softly stroking the soft (oh, so soft) grey shades of loveliness. Then she took it from me (claiming something about having to go home and wanting her yarn to come with her) and my hands have felt somewhat empty since. Then she roped me into knitting 16 stitches for the Knitting Olympics and this week, The Seated View looks like it’s turned into a knitting blog.

I’ve always admired knitters and knitbloggers. They are some of the most amazingly thoughtful people in the world. I have tiger socks because of a knitter, knitters have raised over $100,000 for MSF and there’s just not enough good that can be said about them. One thing that makes them great is how generous they are. Which is why yesterday, I got a way cool package containing a kismet audiobook from Alison H of the comments (and her dad) and when I opened the package, the book was wrapped in this: 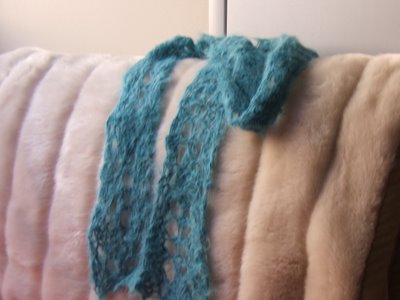 How the woman knew I’ve been looking for something stylish to warm my neck, I have no idea. Alpaca, people! And it’s mine.


Also arriving in the mail was a little something from here. Until a few years ago when I accidentally read about her sister’s business on Norma’s (knitting)blog, I’d been relegated to no or crappy chocolate due to a late-developing nut allergy. It was like finding heaven on earth (their dark chocolate is particularly celestial). I made another order a little while back and remembered being very reasonable about it, deleting a number of items and restricting myself to just a bit. Which is why I was a tad surprised when the box contained this: 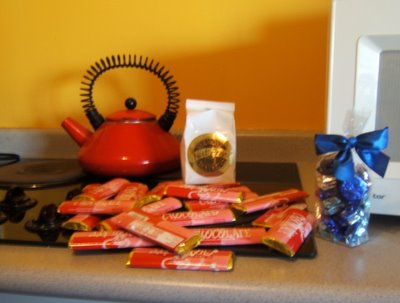 I apparently was under the influence of a teensy case of PMS when I ordered. Which, relatively speaking, makes it an entirely reasonable order. Right?