In a recent viral video called Blind Devotion, true love is described the following way: “Cecilia will never know how much I do for her and I don’t need her to know. That’s how much I love her, even though she doesn’t want me to.”

And this is how the video ruins what is otherwise a wonderful description of the worries and reactions of someone who has been diagnosed with a chronic illness or acquired a disability.

I’m about to rant. You might want to watch the video first.

What’s right about Blind Devotion
So much about this video got it right. When the woman (Cecilia) is diagnosed with the illness that will take her sight, her reaction and worries ring true. Whether you have a disability or a chronic illness, this will remind you of the early days.

Worrying about whether you can continue to work, how you might lose your career, and can you continue to do something as simple as laundry, is something every person with a chronic illness has worried about. The crying, the anger, and frustration, the not knowing how to tell the people who love you. And more than that. Wondering whether you will become a burden — will your spouse be better off with someone who is able-bodied, healthy? Believing that you are becoming your spouse’s patient instead of their partner.

The next part, narrated by the husband (Louis), also starts off right on the money. It shows how his wife has figured out how to do household chores, such as the laundry and cooking his breakfast, things that are important to her. The shot of her face while she is doing the laundry says everything. The smile of triumph, of love. I bet you know that feeling, too.

What’s wrong about Blind Devotion
Early in the video, the wife says that the commute to work is one of her favourite things. It’s her time to herself, time to breathe and clear her head. Later in the video, after the diagnosis, her husband says “she still insists on going to work.” And this is the first time I could feel my hackles rise.

Why wouldn’t she? She’s going blind, not losing every other part of herself. Having a disability or chronic illness doesn’t mean you instantly want nothing more than to sit at home for the day, twiddling your thumbs until your beloved returns from his day at work.

He tells us how she doesn’t want his help because she has found a way to do the things she wants to do. Louis lets her and yes, I am using the word “let’s” advisedly. Because when it comes to walking to work alone, something else entirely happens.

Louis says “my heart stops every time I think about her crossing the streets of downtown, so even though she doesn’t want me to, I follow her every day without her knowing.” And he does. She walks towards the bus with her white cane, having learned to navigate the streets of the city herself. Yet, he follows her close behind, removing obstacles from her way, even something as simple as preventing a stranger from sitting next to her on the bus! And when she arrives at work, he passes her over to her coworkers to help her get settled at her desk, while placing his finger on his lips.

ARE YOU KIDDING ME???

And something the wife says during the time when she is upset about her diagnosis, but hasn’t told her husband yet, seems like it belongs in this third act. “And now, when all I want to breathe and walk to work alone, I can’t. Because Louis won’t let me.”

Louis following Cecilia to work is not true love. It’s paternalistic coddling. And he compounds his own actions by drawing her coworkers into a collusion of an overprotective bubble. Following her to work infantilizes her. It makes her coworkers — and us — see her as a child who needs supervision. And, just as with a child that insists on doing grown-up things, we all pretend they can. Isn’t it cute, the way she tries so hard? But she’s not really capable, so he follows her around removing every obstacle from her way, giving her the illusion of independence and capability. Because apparently that is something for him to let her pretend she has, not qualities which she can create herself.

True love, my arse! True love respects her wish to be independent, in fact glories in it. It means you stay on the sidewalk outside your apartment and watch your beloved leave for work, just as you did before the disability/illness. And although you might be nervous at the risks she will face, your heart will swell with pride to watch her walk into the world she has created.

That, my friends, is true love. To be there if you’re needed, but wait to be asked. 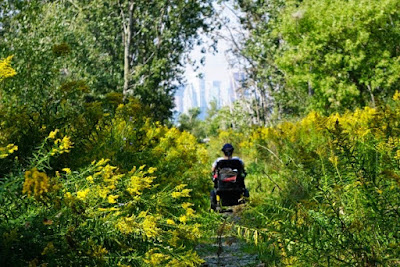 Kaz said…
Oh my....this brings back memories - and not good ones. I was in a relationship with a man that I had to leave in the end because it became abusive. It became abusive, in part because I wouldn't allow him to do things for me that I was perfectly capable of doing for myself. He willfully - and I say that deliberately because I explained it to him very carefully - insisted on opening jars for me, refusing to understand that I was going to keep trying to do it myself for that one time in ten that I got the damned lids off, and the other nine - well, I had a tool for that... Instead, he loosened all the jars so I wouldn't have to deal with it - which lead to all kinds of crazy stuff with food going off in jars, things being spilled when the kids picked up jars by the lids and so on...and that's a small example. There were much bigger things. Effectively, by not needing him to do every little thing for him, I deprived him of his reason for being in the relationship, apparently. Really disturbing - and then he got violent.
My partner now often says that one of the things he admires MOST about me is my refusal to cave to the RA. That I keep pushing to do stuff, even when it's hard. He watches - but not like Louis - and stays out of the way. He's there if I need him, and happy to help, but would NEVER take my independence away from me. That wasn't a rant, BTW. That was a very clear statement and entirely appropriate!
3:23 AM

Unknown said…
With my RA symptoms recently returning, I've found myself once again trying to figure out what role my husband plays. He tends to give me lots of independence, but this can also feel hurtful at times. Finding that balance is definitely a challenge. We each have our different fears and frustrations.
8:22 AM

william Peace said…
You were too kind. This short film is dreadful on par with the commercial Purple Feather. There are some redeeming moments but too many stereotypes are perpetuated and reinforced.
11:00 AM