An Encounter in the Park

I’ve discovered that August was so wonderful, not just because I was only doing one job, but also because I took actual breaks. Although I was writing most days, I also made sure that by 12:30 or 1 PM, I was out in the weather (which was mostly sunny and warm). It seemed like a good idea to make that approval, at least as long as the weather won’t cause extremities to turn into icicles.

So I went to the park. Ran into my friend Cathy, and we sat and had a chat in the sunshine while watching a flock of huge dragonflies flit about. It was wonderfully relaxing.

A guy went by on the street, noticed us and popped in on the grass to ask if one of us had a cigarette. The poor man was “jonesing.” I don’t carry the anymore, what with coming up on my 12th anniversary of quitting, and my friend was not in mood to hand out her segments to random strangers. So we wished each other a good day and he walked off.

Only to double back and ask “do you want a lorazepam?”

As surreal encounters go, this was almost as good as Syphilis Guy. 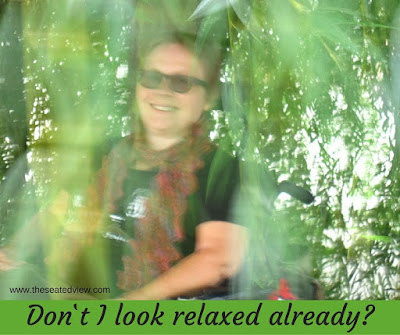