Dear Mercury: Are You Done yet? 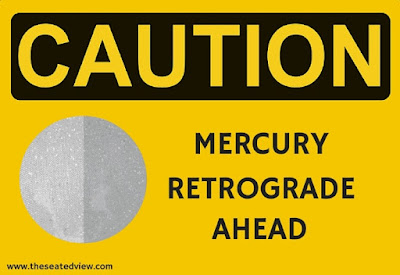 I know that you going retrograde several times a year is something you have to do. I’m not quite sure why this is necessary, but I accept it. I also accept that historically, you’ve had a tendency to mess with Regan, my power wheelchair which has, for reasons (mostly) unrelated to you, been named after the girl in The Exorcist

. Perhaps her — the chair, not the girl In The Exorcist — being a bit of a lemon calls out to you in some sort of special way. Perhaps you have a connection. Perhaps you were soul mates from another life. To be honest, I don’t care, because what the two of you have going is exhausting me.

Two Saturdays ago, I had to book an emergency call with a wheelchair repair technician when I found out that grounding prong on the cord of my charger was stuck in the wall. This is not necessarily your fault, Mercury, as I later found out that it had apparently been in there for quite some time. Nonetheless, an emergency call is expensive, but as I was given a loaner charger, I thought it was worth it in the big scheme of things.

Last Saturday, one of my tires blew. While I was on the Toronto Islands. It’s been a long time since I’ve had a flat tire and I’ve never had the actual tire blow out, as well, but it was fairly bald, so perhaps not wholly unexpected. 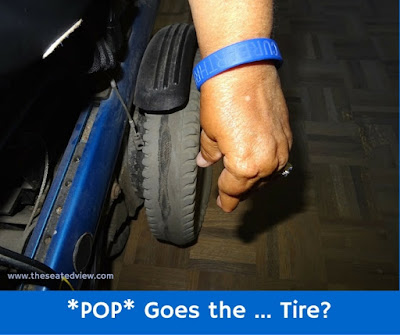 Given that a bird had already pooped on me, it wasn’t really a surprise. They say that means luck, the pooping. I guess I should consider it lucky that it apparently was a small songbird, rather than a seagull. And that we were able to limp to the ferry, get a ride to home, and another emergency technician came quite quickly.

Nonetheless, two emergency calls in one week has so far cost me $500. Considering that my new wheelchair was ordered just last week, I’m sure you can imagine why my teeth are grinding.

I should also mention that it’s not just Regan who has been entertaining me with a variety of problems. On Sunday when I went for my mandatory rest period, something went *sproing*under my right butt cheek. That area has been kind of sore since and not terribly comfortable in the bed. I worry that this means I have to get a new bed. Given how persnickety my body is, responding with extreme pain to even the slightest change, it’s something I dread. I’m also not ecstatic about how much a new bed will cost. If I want another adjustable one, the frame alone is about $3000.

But I digress. Back to Regan’s escapades.

Yesterday, on the way to the Market to buy some dinner, my chair lost power and screeched to a halt. Luckily, this happened not too far from my home, and not in the middle of the road in front of large vehicles. Perhaps it’s the powers of that bird poop still casting a magic spell over me.

I carefully noted the error code by my joystick display and limped home to call Dave the Wonder Repair Guy, thankfully back from vacation, to find out what was going on. He tells me it’s an issue of too much or too little current going through my controller. Since I had tried out my old charger the night before, it’s clear that the grounding prong being stuck in the wall wasn’t the only problem. However, according to the manual, all I need to do is turn the chair off, then on, and that should solve the problem.

Yay! I don’t need to spend money on this.

(yes, that was forshadowing. I’m practicing my literary devices)

Twelve hours later, I discover why I’ve been uncomfortable for a couple of days. My left footrest is wobbling from side to side. It appears it’s been doing so a little for a while, but now that Dave is back from vacation, it apparently felt that it was okay to let go fully. With the changed position this forces on my body, all of me hurts.

Thankfully, Dave has time tomorrow to deal with everything. Which will cost me more in labour and transportation, but is definitely worth it. I like being able to move around without constantly expecting disaster. Dave also mentioned that he’d had a chat with someone from Invacare, the makers of my wheelchair, about that additional note on the error code indicating that it was a “Jig Fault.” This does not mean we weren’t performing a folk dance to standards, but is instead a very rare error.

Of course. Because that’s what happens to my chair. Rare errors, problems that only happens to one in ten chairs, the unexpected. And they especially happen during Mercury Retrograde.

However, dear Mercury, you are not going backwards until the 17th! My good friend Gaina tells me that you have just gone stationary in preparation for backing up. And I would like to point out that that is a bit early to get going on Regan! It also makes me worry about what you have planned for the three-week period in which you actually are retrograde.

I do hope that the magic of the bird poop means that you decided to get me off your list early and that we are therefore done now with the problems. If not, I might take up drinking.