August 27, 2012
This might be my last rant about Buskerfest. Despite it having become an annual tradition to which I know you’re all looking forward with bated breath (no?), it may be time to close the series (2005, 2007, 2009, 2010, 2011). Not because Buskerfest has magically become a paragon of accessibility – were it only so. No, it’s because I'm starting to think that it might be healthier to ignore the blasted thing. Not accessibility itself – I’ll continue to advocate for it – but accessibility in the context of Buskerfest. I believe the adage about not being able to control what happens applies. The adage that continues that you can control how you react to things. And after today, I will react by focusing on something that doesn't aggravate me quite so much. So, for the last time I present: the annual rant about accessibility issues at Buskerfest. 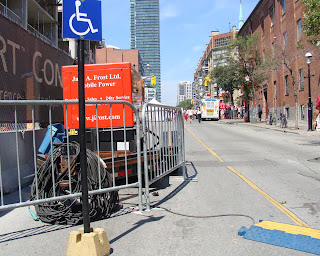 Most of which didn’t seem to have been put into place the first two days of the festival (and weren't by every one of these behemoths covering electrical cords). Also, despite the curbcut and the helpful sign, this 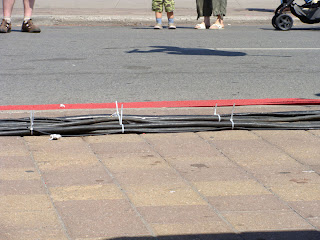 It's not that the donation boxes are located at shoulder height of a standing person, making it look like you don't assume there will be disabled visitors (maybe they've read my posts?) 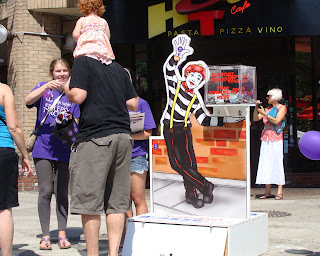 It's not that it's crowded. Is not that is pretty much impossible to pass through a street during one of the performances 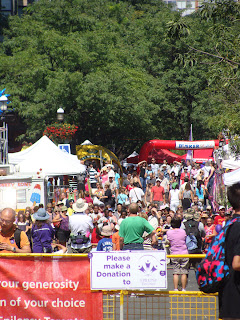 it's not that the sidewalks on streets leading to the main festival area are randomly blocked, requiring you to double back to get down to the street (it should be noted that a lot more ramps had appeared by Sunday, the second time I went to the festival) 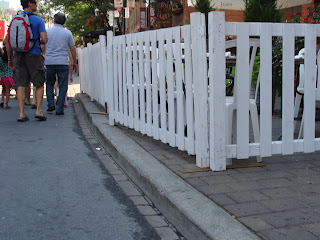 it’s not that several of neighbourhood restaurants that expand onto sidewalk patios during the festival do not include a gate in their picket fences, which is an interesting business decision given how many people with disabilities live in this area (Hank's, The Great Burger Kitchen and LePapillon). The restaurants that you make their premises and sidewalk patios accessible – The Jersey Giant, The Sultan’s Tent and many more- will therefore get more business. 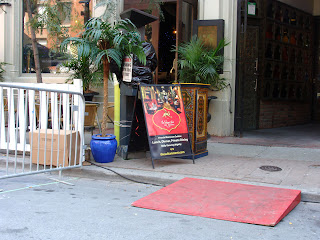 It’s not the noise, the inability to go grocery shopping, being told by officious idiots that you can't use the sidewalk or that my neighborhood - one of the most accessible in the city - becomes virtually impassable for the duration of Buskerfest. It’s not even the endless sea of butts. Or that this always happens on my birthday weekend.

It’s that it’s four days. I could hack two days of feeling unwelcome. I could put up with not being able to go by orange juice for a couple of days. I have no problems with keeping away from the madness for 48 hours. But four days??

And it’s that an event that supports Epilepsy Toronto, an organization that works with and for people with disabilities makes it well-nigh impossible for people with disabilities to be part of it. On the one hand I appreciate that they have accessibility volunteers - it's a decent solution to the problem of… Well, almost everything about Buskerfest when you have a disability. But if that niggling sensation in the back of my head that reminds me accessibility isn't about being given a minder. Accessibility is about dignity and independence.

So as I close this last in the series on accessibility at Buskerfest, let me ask the organizers of it this: if I can't enjoy your festival independently, how accessible is it?
Accessibility Advocacy Disability Downtown Living

AlisonH said…
I'm not sure I'd give links to the bad-guy businesses. That's upping their Google ranking.
2:18 AM

Leslie said…
I love a good festival but I can't imagine how difficult it would be to try and navigate such a thing in a chair without ramps over those crazy cables and curbs when everything is blocked off! Really, how much could those things cost? It doesn't take much thought to put one of those down every time you block access. Doesn't look like they are trying very hard! Oh, and Happy Birthday!
9:28 AM