I don't remember becoming friends with AB, just being friends with her. When I entered grade 1, I didn't know her and her name was Anne Birthe. And soon after, all I remember is her being AB and my best friend. AB, though, remembers making friends with me. In , there is a tradition on your birthday to bring candy for your classmates and I had brought licorice (much like Twizzlers, except better and I'm not biased - if you've tasted Danish candy, you know I don't lie), one for each student. The way AB tells the story, she noticed that I had a few left over and decided to come over and say hi. Presumably I shared the leftovers with her and the rest, as they say, is history. That was 39 years ago.

When we were kids, AB would come by our house in the morning and we'd go to school together, walking or biking home after school. Then we’d hang out at my house or her house and if it was the latter, we would torture her two-years-younger sister, KL (short for Karen Lise). There's a neon green (and very tasty) Danish popsicle called Champagne Fizz - I have no idea why, it has very little to do with Champagne - and we once told her that she couldn't have any until she got older because of the alcohol. She believed us. It was great. When I joined the family at AB's parent’s cottage, AB and I would climb up a ladder to the tiny attic at night and fall asleep to the sound of the waves in Roskilde Fjord (a tiny fjord, not nearly as imposing as the Norwegian ones). They had a red rowboat anchored a ways out and every day, we would wade out and spend most of the day there. The cottage was close to Jægerspris Castle, occupied by King Frederik VII's wife “to the left hand” (by which was meant any children wouldn’t be heirs to the throne – more about them here) and one of our favorite games were pretending we were them (I forget who was who). Basically the game involved bossing around KL, including making up a specific name for her (meaning serf), which we used mercilessly throughout the year. Still slips out sometimes, much to mine and AB’s amusement (for some reason, KL doesn’t laugh as much about it). Near this castle was the best ice cream stand in , complete with just-baked waffle cones, whipped cream and homemade strawberry jam. You could smell the waffles from the parking lot. And when my sister was born when we were about 10 years old, AB became her sister, too. We didn't torture Janne quite so much - with that big of a gap, it's just not fair.

by the way – the fact that the above was very food-oriented is apparently very Danish. If you’ve been out, the first thing someone will ask about the evening was what you had to eat. Makes sense to me)

s we grew older, our friendship not only survived, but flourished despite much of the time between ages 11 and 16, I was in the hospital. We stayed friends through high school, even though I was in the language department and AB took math. Then she went to for a year to be an au pair and when she came home, my family and I went to . And that's when our friendship became even closer. AB has been here several times - I don't even remember how often anymore – the first time in 1986, when we all went to Expo ’86 in . When she and her husband Bjarke invited us to their wedding/christening of their oldest, Camilla, they didn't expect we'd come, but we did. And when Janne and John got married, AB came to their wedding, flying on 9/11 and ending up in , for a couple of days before being able to continue to . She arrived just in time for our traditional trip to for crab with black bean sauce and then the wedding. When it became clear that my dad would not recognize us for much longer, AB came again and three years ago, she brought her kids, Camilla and Christoffer, who felt that we should be adopted as official family. It was a high honour to be named officially so by children who knew us, but likely didn't remember meeting any of us in person.

henever she goes, AB makes friends because she's that kind of person. She's kind, warmhearted, generous, smart, funny and has no qualms about showing her love. She is my sister-friend and one of very few people who have known me so long and so well. I don't remember much of my life before I was seven and that means that to me, there is almost nothing of my life in which AB hasn't been an important part.

e talked when my uncle Poul was here and she got so inspired by hearing about his visit that a few days later, she called us up and asked if we would mind her "popping over" for a week. Are you kidding me? Mind?? So she arrived on Friday and we've been having a grand time.

n honour of AB's visit, I'm having a contest. Prize is an 8x10 print of any of the images on my Flickr page (which will be updated sometime this week). To enter, leave a comment with a story about your best friend. Contest closes 6 p.m. Thursday evening and the winner will be chosen randomly by AB (seen below with her arms full of Tinks) before she hops on a plane at the end of the week. 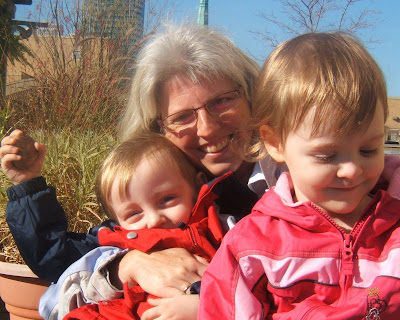