I borrowed a blanket from my mother last week. It was my father’s, bought when he was young and working all over the British Isles. The blanket he bought in Scotland and I am pretty sure it’s the Royal Stewart tartan. It’s wool and large, larger than any other blanket we’ve ever had and there’s a rip in one end that’s been there for as long as I can remember, never advancing deeper into the reds and greens and blues.

My father used to nap with this blanket, never with anything else. He napped on a single bed that used to be mine when I was a child, covered up, cocooning in the blanket. I remember waking him up a little before dinner was ready, allowing enough time for him to wake up fully – I get my post-sleep stupor from him – and wash his hands. I’d quietly say “far? It’s 6 o’clock”, wait a beat and then repeat it a little louder. I get my ability to sleep through World War III from him, as well. He’d jerk awake, mutter something sleep-drunk and barely recognizable as “got it”, and his head would crash back down on the pillow while he attempted a slow return to consciousness. He’d hardly ever move when he napped, even in sleep following his dictum of ‘if you’re going to bother doing something, do it all the way’. Despite the stillness of his body, his hair would always stick up in seventeen different directions when he woke up. I never figured out how he managed that.

The truest smell of someone comes when they sleep. My father never used cologne and so the blanket was suffused with his smell, his essence. I’d use the blanket sometimes, before I bought my own, and regardless of the at times complicated nature of our relationship, enveloping myself in that blanket felt like being wrapped up in him and it was safe and warm, uncomplicated and true.

Last Friday, I borrowed the blanket because mine was in the wash. I needed a nap, a recharge after a very bad day and so I lay down and bundled myself in it. The first thing I noticed was the weight. It’s heavier than my blanket, just the right kind of heavy. Enough to make your body feel well covered, but not enough for claustrophobia. The wooliness makes it a little scratchy, again just perfectly so. And then it hit me.

It smelled like my father still. Not a lot, just a hint, a breath of his far-smell, the smell that is uniquely him, the smell of no one else in the world. And all of a sudden, the missing him, the ache in my heart that has his name on it, was there no longer. I was wrapped up in him again and I have slept like a dream since. 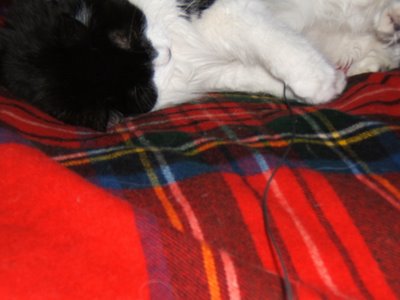