is my mormor – my mother’s mother (the cute kid is my sister 20 years ago – she now looks like this). Her name was Søster Karen Christensen and she was the perfect grandmother.

She was funny and not afraid to use herself as the punch line. Once, in her mid-eighties, in a checkout line, she looked at some parsley and sighed, completely deadpan, “I once looked like that” and calmly continued stacking her groceries while everyone else fell about laughing.

When I was a child and staying with her and morfar (grandpa), I’d sleep with mormor in their bed (morfar took the divan) and I’d be lying in bed, watching her get ready. Every night, after she took out her dentures, I’d pester her to say futtog (“choo-choo train” in Danish). You haven’t lived until you’ve heard how that sounds without teeth. She wouldn’t do it all the time for she understood that the special disappears when it is made routine.

Those times I stayed with mormor and morfar were among the best memories of my childhood. Mormor and I would putter around, go shopping, feed the ducks here, just minutes from her home, go to the cemetery and take care of the graves. At lunch, she would make liver pate sandwiches on dark ryebread and cut them into small bites for the wild cats that lived in the back yard of the building. I would carry the food and she would carry the heated milk she served with it and dozens of cats would come twine themselves around her.

She started my lifelong fascination with scaring myself when we watched The Spiral Staircase together. I was about 10 years old and we agreed not to tell my mother. I was gripped, excited and loved every minute of it. I’ve been looking for that movie ever since, but haven’t found it. I wonder if it’s a good as I remember?

Every summer, the whole family would go to Grib Skov to pick wild raspberries. Mormor had a special place that it seemed no one else know about – there were always more raspberries that we could possibly pick and we picked buckets. I’d thread them on long stalks of grass, stacking little globes of dark red one atop another, and eat them sitting on the sun dappled forest floor, surrounded by the smell of pine and sand, watching my family talk and laugh and pick. Then mormor and mor would make raspberry jam that never seemed to run out. It’s the best jam I’ve ever had, the wild raspberries a taste of that day in the woods, even on the darkest, coldest winter morning.

My image of mormor includes the cigar. As she worked, she always had a rarely lit cigar of various lengths in her mouth. The apartment smelled of stale smoke, but somehow, that was part of mormor. And if flakes of ash should oocasionally drift into the gravy, well… it just added a certain je ne sais quois to the dinner. She quit in her eighties, after decades of smoking.

Mormor left her childhood home at 14 to go into service. She nursed strangers through the 1918 influenza pandemic and eventually made her way to Søllerød Kro (English review here), where she started her apprenticeship as a smorgasbord chef. She was the image of the independent woman – smartly dressed, valued for her talent at a time when women were less valued, free at a time where most women weren’t. She seemed to me to have a slight air of wistfulness sometimes, as if she wondered what would have happened had she not married and had children and I think this was one of the first times I was aware of choices and their consequences.

And talented she was. She put on the best smorgasbord I’ve ever had. Several times a year, at Easter and Christmas and sometimes more, the whole family would gather at her and morfar’s and eat leisurely for hours. Afterwards, the men would sleep or go for walks while the women cleaned up before coffee and cake. Before I knew what feminism was, I thought it was unfair that women had to continue to work, while the men lolled about, stupefied with food. It didn’t take me long, however, to realize that it was in the kitchen, over soapy dishes and brewing coffee, that all the important things happened.

Mormor always hummed, no matter what she did. The Danish hymnal lists the composer and lyricist of each hymn – some says “own melody”, which means the lyricist had composed the music, as well. As a child, mormor thought this meant that she got to make up her own music and although the teacher disabused her of this notion, for as long as I can remember, she’d be humming her own songs. Not terribly catchy - you certainly couldn’t sing along - they were more like improvisational jams flowing out of her soul.

When mormor could no longer handle the physical demands of her apartment, she chose which nursinghome she wanted and lived there for years, charming everyone in her wake. One day, in her 94th year, she said she was tired and set about to die. It took her two weeks, but die she did, on her own terms and her own schedule. She died on my birthday, 11 years ago today, and at first, I thought it would cast a pall over “my day” in years to come. After that first day, though, it has become a special link to our unique bond. Every year, I take some time to think of her on this day. Every year, I give her a silent toast, just between her and I, at my birthday dinner. This year, not so silent. 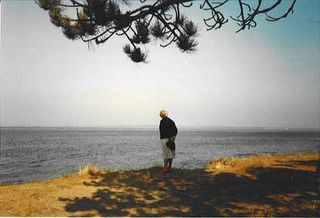