Last Friday, I was at the official opening of the revitalized Queen’s Quay. But I get ahead of myself. 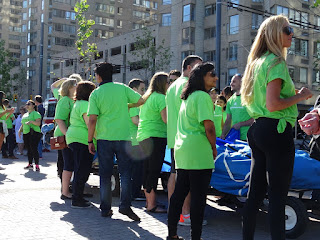 Look for the guy in the green t-shirt, they said...
Four years ago, I posted about accessibility barriers in the path to the beach. Subsequently my MPP, Glen Murray, a true champion of universal design, facilitated a tour of SugarBeach with staff from Waterfront Toronto. It was a great day, with lots of opportunity to talk about accessibility, barriers, and solutions. At the end, they committed to involving people with disabilities in the consultation process as they began the revitalization of Toronto’s waterfront. 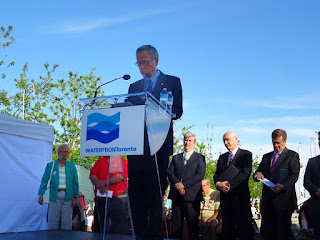 Joe Oliver, Minister of Finance delivers his speech
Six months later, I got a call. Would I be willing to serve on the Construction Liaison Committee (CLC) of the project? Being asked to put my money where my mouth was, of course I said yes.

It’s been an amazing 3 and a half years. The monthly meetings of the CLC has taken us from the planning stage of a huge and complicated revitalization of Queens Quay (the street that runs along the waterfront), to the completion of this fantastic project. Seeing it all behind the scenes has given me and the other community stakeholders on the committee a thorough understanding of what goes into construction. Waterfront Toronto committed from the start to excellence and throughout the last four years, they’ve lived that commitment. This wasn’t about the lowest bidder and cutting corners. This was about quality materials and quality workmanship coming together to build something beautiful, usable, and long-lasting. (see before and after photos) 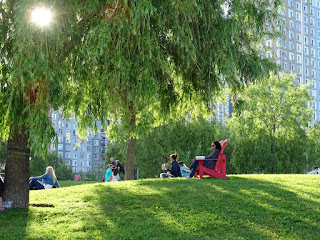 This stretch of Queens Quay is now, in the parlance of urban planners, a “complete street.” That means it has room for everyone. There is a wide promenade for pedestrians, and a bike trail, separated from the street, keeping bicyclists safe. That is a dedicated lane for public transit (in this case, streetcars), and a road for cars.

The Promenade is one of my favourite parts of the revitalization. It’s made of Canadian granite. 2.4 million pieces of it. 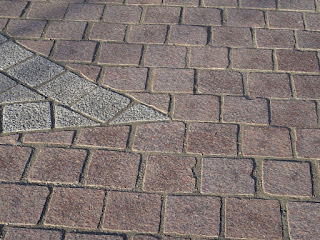 The last of the granite was laid the day before the opening. I’ve watched workers putting these down, on their knees, and carefully following the pattern of maple leaves that now decorates over 2 km of Queens Quay. Imagining this being done 2.4 million times is a little overwhelming. More than worth it, though, as its built for the future, the granite estimated to last a hundred years.

And that’s just one part of the project. There's lots more. I learned about dewatering, an essential process in construction on the waterfront, and the careful thought that went into selecting the trees for the Promenade, including much about Silva cells. There was collaboration between Waterfront Toronto’s construction, coordinated in an elaborate dance with upgrading from Hydro and TTC. They worked through two of the coldest winters we’ve seen in decades, and still delivered on time.

And it’s not just about the street, but innovative public spaces, as well. My beloved Sugar Beach is part of the revitalization project. So is it HTO Park (here seen earlier this year) 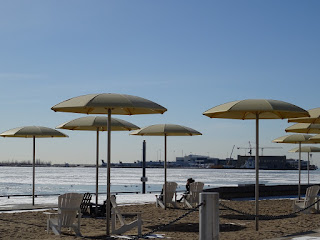 and beautiful wave decks, the most created of which is Simcoe Wave Deck, built for play (also from several months ago). 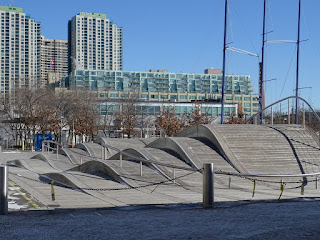 Throughout the process, everyone involved listened carefully to the community through public meetings, and the CLC, composed of representatives from local businesses, local residents, and me, chiming in about accessibility.

Friday’s opening included speeches by elected representatives from all three levels of government which had each contributed funding to the project, as well as from the local BIA and residents. This all happened at the Simcoe Wave Deck. An area in front of the dais was roped off for people who use wheelchairs and scooters so they wouldn't get buried in the crowd. 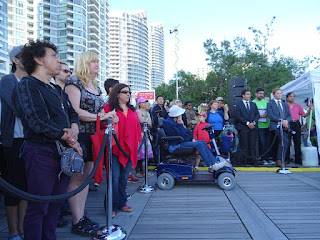 Let's talk about the ribbon. Over 600 m long (longer than the CN tower is tall), the blue ribbon was held by volunteers all along Queens Quay. It was unzipped rather than cut, and pieces are going to be used by artists and kids programs, celebrating the new Blue Edge. 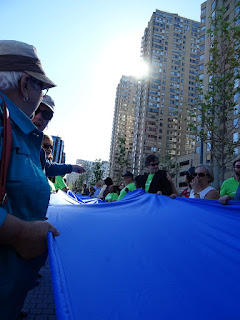 And then there was a party at HTO Park which continued right into the Redpath Waterfront Festival. It was a very good day.

I’m very proud of being part of the waterfront revitalization process and proud of Waterfront Toronto. It staffed by people who are passionate about their work, and who work hard to create something unique and iconic for Toronto.

Come check it out. Go #TOtheWaterfront. 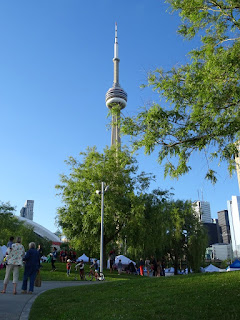