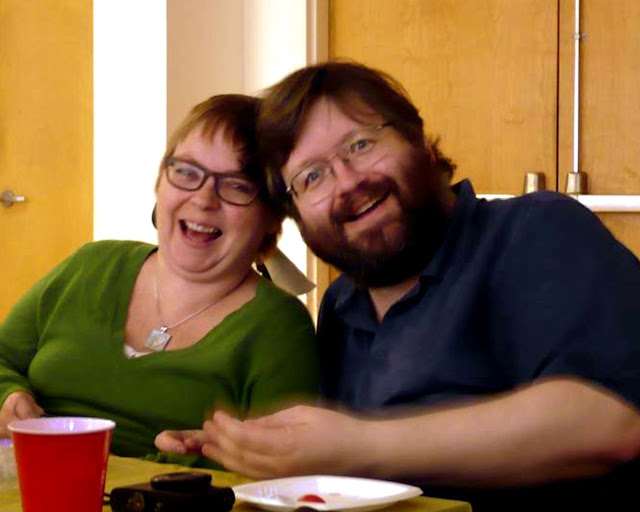 “Is that your brother?”

We get this all the time, The Boy and I and I don't know why, except that we are both somewhat rounded and wear glasses. Well, that's not actually true, because I do know why. It's because able-bodied men don't date women in wheelchairs. To be even more specific, women in wheelchairs don't date.

People with disabilities aren't usually allowed the imaginary leap it takes for others to see them as three-dimensional human beings who can have all the different kinds of personalities that others do - yes, even be jerks! - or experience the myriad of emotions that come with being a person, even love and desire. Having a chronic illness can make it hard enough to be seen as someone other than the Poor Suffering Martyr, but if you have a visible disability, forget about it. In the eyes of the rest of the world, we are asexual beings, dropping off our wishes for love, longings to kiss someone who knocks our socks off and desire for a good lay at the same window where we picked up our disability. It seems to be a sort of barter system – one is exchanged for the other and for the rest of your life, you will be a two-dimensional stereotype.

Unless you're a man with a disability, in which case it might - again in the eyes of the able-bodied world - be possible that you could find a woman who’d look past the disability. Particularly if you are paraplegic, which is the most able-bodied of the disabilities, enabling its practitioners to look almost-normal, almost like a regular person sitting down and maybe even get into sports and bulk up your upper body and get all heroic (see: Rick Hansen). And yes. It is on purpose that this particular excursion into the world of disability love stays firmly within the straight world. Because imagining the trifecta of love, sexuality and sexual orientation tends to be too much to ask. I have seen several people's brains implode from trying.

But if you're a woman? It doesn't happen. Women aren't allowed to be sexual much in general, but disabled women get completely neutered. We have no role models of hotness or beauty and I am sure I’m not the only one who's gotten so used to not even being considered that the odd moment where I get objectified is sort of fun.

Which brings us back to the case in point. The Boy and I and the reactions we get when out in public. I live in a wonderful area of downtown Toronto, one that is made up of every kind of person you can imagine and one of the things I like most about my neighborhood is that a same-sex couple can walk down the street hand-in-hand and nobody bats an eye. It's a sort of litmus test for tolerance and acceptance and my little corner of the world passes that test.

It turns out that there is a litmus test beyond that and that is a disabled person holding hands with their partner.

In the beginning of our relationship, I mentioned it to David, this becoming an oddity that comes with choosing to love someone who travels seated. I'm pretty sure he might have thought I was exaggerating a little. And then we started leaving the apartment occasionally and for the first little while, he noticed every time somebody stared at us.

I once wrote about how all aspects of being a person with a disability in public can become acts of advocacy and yes, holding hands with your beloved definitely counts. It is as if it is the last bastion of the socially acceptable, this messing with the stereotype, this exploding out of the narrow box in which the norms place us, it is flaunting a love that not so much doesn't dare to speak its name, but rather wasn't conceived of to begin with.

And now that we have crashed through that wall, the next little box in which they put us to stay comfortably away from being challenged is the one where The Boy is such a saint for being with me, because it is (yet again) inconceivable that we might love each other for the exact same reasons that others do. The wheelchair automatically nullifies these reasons, obliterates attraction, desire, comfort, laughter, partnership, leaving only caregiving and that only one way. Only able-bodied to disabled, never the other way. And that, by the way, is not limited to a romantic relationship - most of my friends have received comments about being extra nice, saints even, too. For befriending the poor cripple, y'know. But that's a story for another day.

So what do we do? By now, two years into being us, we just are, going about our business, buying strawberries, going to the theater, taking a walk and usually hand-in-hand. We ignore the stares, don't really see them anymore and every now and again, when someone asks if he's my brother, I just smile and say "no, boyfriend."

But every now and again, we’ll engage in a particularly affectionate PDA while waiting for a light. Just to mess with people's minds.
Advocacy Disability Love

Unknown said…
I so loved reading this !! You are Brillant! I LOVE your blog and I Thank you Lene! Xoxo Janet
11:30 PM

Sue in Bristol said…
Love the photo - it is brilliant and so are you two. As for your post, that is great and I too would love messing with people's minds. Long may you continue to enjoy each other. Sue
6:48 AM