Pet rescue for the Rapture. No comment. Just… no comment. Sort of related, Ann Coulter’s people cancel one of her Canadian appearances due to a large protest outside the location, as it was "a threat to our safety". Don't these people know we're Canadian?? We may protest things, but we don't get violent. And for another bit of odd , Donna Simpson wants to be the world's fattest woman and I don't even know where to start with that, so instead I'm going to move on to tips on how to avoid death.

Speaking of death, they found 51 beheaded Vikings when excavating a site for the 2012 Olympics in London which I find way more fascinating than the summer Olympics themselves. For an Olympic-sized ‘huh?’ check out this article about a man suing an outline because the flight attendants did not look at his scrotum, a fish with Olympic-sized muscles and an Olympic-sized conspiracy (OK, so the Olympics thing applied less and less as that sentence went on…).

After I read the Esquire article with Roger Ebert linked to in last month's Random post I found a mention of him being on Oprah, with links to the company that has made his communication device sound like him. Lots of really interesting samples of different dialects and accents. Every time I think I've reached the pinnacle of just how gobsmacked I can be by what computers can do, something new comes up.

And speaking of voices and accents, LynnM sent me this terrific link about what English sounds like to other people (take your time, listen to them all - they're fantastic) and Carrie sent me the Handsome Men's Club, which you should probably watch alone in order to not frighten others with the hysterical laughing. John/TinkPapa set me some truly astonishing paintings, as well as this one 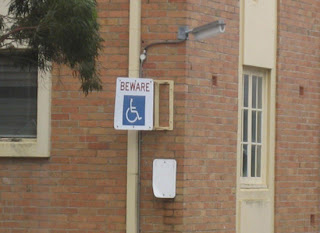 Good to know that our image is starting to change from sweet and angelic to something a little more accurate. Trevor sent me the differently abled awning, plus a really terrific song that he originally heard on the Ouch podcast. Imagine that - a song about autoimmune diseases, it's got a great beat and it's from (but sung in English, so have a listen)!

This month, David's contributions includes alternate titles of this year’s Oscar nominated movies, a pretty cute photobomb and speaking of the Olympics, to illustrate how close some of the events were (e.g. the 0.02 of a second in women's 1000m speed skating), don't try to visualize, listen to it. OK Go’s new and, really, really cool video and a wonderful blog written by Derek Lowe, a chemistry guy who devotes an entire section to things he won't work with for various and hilarious reasons - one of my early favorites is the one about FOOF, although the post on why you should not remove a pressure release valve is quite priceless, as well (and, it has pictures!). Another interesting man is Raj Patel, author and food activists, who has somehow been proclaimed the Messiah by a small, obscure cult. The article is terrific, but check out Patel's website, as well. Lots of food (!) for thought.

And completely and utterly random, an example of a substantial misunderstanding regarding what constitutes fun (possibly not entirely work-safe) and a rant about grammar, which is most definitely NSFW and contains some really foul language, so consider yourself warned.

And lastly, a brilliant performance by Gabrielle Bouliane at the 2009 Austin Poetry Slam. She is no longer with us, but if you have a dream you've put off or in general need a reminder to stop waiting, go listen. And then go follow your dream.