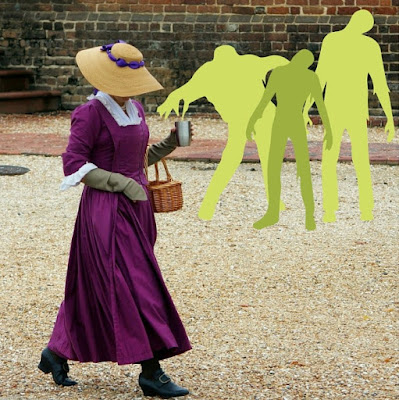 It all started with Bridget Jones's Diary

.  The messing with Jane Austen, I mean. Well, I'm sure that there have been people messing with Austen before that, but if you're looking at the most recent tendency to mess with her, Bridget started it. And did it well. It’s a fantastic book, turned into a fantastic movie that I watch on a regular basis and the only problem with it was that it persuaded all kinds of other people that they could successfully mess with the master. Some have been pretty good and then… then there’s Pride and Prejudice and Zombies

Somebody got the idea to take Pride and Prejudice and add some zombies by inserting period-appropriate bits and dialogue about zombies.  The idea is that 25 years or so before the book takes place, a strange plague hit England creating Unmentionables (i.e., zombies) and these Unmentionables are fought by men and women alike. In fact, the five Bennett sisters have spent several years in China learning the art of combat from a master and it seems that part of being an accomplished young lady can include zombie fighting.

I'd seen it on Audible for a while - they put it on the front page for a long time and I checked it out once or twice, thinking it sounded sort of silly and I wasn't really sure if I wanted one of my favourite books messed with to that degree. Then I saw a blog entry somewhere linking to the book trailer - because apparently, now books have trailers, too - of Sense and Sensibility and Sea Monsters and I laughed and watched it more than once. Thought it exceptionally funny, so I went and spent one of my treasured credits on its predecessor.

And I've given it a good try, really I have. I read for a while, wandered off, then decided to go back and give it a little longer, give it some time to work its charms, because it seems to be very popular. So popular that it's spawned (sorry) a sort of sequel. But I can't do it.  Because it turns out that there are certain things that in my world should not be infected by silliness or complete revision and Pride and Prejudice is one of those things. After almost 2 hours of listening to it, I took it off my iPod muttering "just because you can, doesn't mean you should" and if it had been a physical entity, I would have followed Dorothy Parker's advice when she in a book review said "this book should not be cast aside lightly, it should be hurled with great force".

I felt the same about The Little Mermaid (go read it. It really is lovely). For as long as I can remember, The Little Mermaid has been my favourite H.C. Andersen -  as he’s called in Denmark - story and come to think of it, my favourite in the fairytale genre. And maybe it comes from being a kid who had chronic pain - I guess I could identify with her when she changed into a human girl and it felt as if she was walking on knives, but it was more than that. It was a book about the power of love, about the sacrifices you are willing to make for the person you love, up to and including giving up the ultimate for their happiness, turning into seafoam rather than kill your beloved. It is a perfect story and I have read it over and over and over again, crying each time at the end, yet never wishing that it had a happy ending because it couldn't end any other way.

And then Disney massacred it. I have been foaming (again, sorry) at the mouth about this for years, ever since the animated movie came out. Had it not been based on my favourite sacred test, I might’ve enjoyed it, but it was.  And became a silly, frivolous, standard Disneyfied dreck where they live happily ever after and aside from the fact that just because you can, doesn't mean you should - you don't see people out there changing the Mona Lisa to a blonde, do you? - I have problems with this continent's incessant insistence on keeping children in a bubble, untouched by sadness or reality in general. Because I think stories like The Little Mermaid - and The Story of a Mother (my second favourite H.C. Andersen tale) - can help in teaching children about sadness in a context that is safe. It's fiction, a story read to them by their parents and hopefully discussed with their parents and it can help teach them what grief is like, what love and sacrifice is about so that when the time comes that real grief enters their lives, they have an idea of what it is and what happens when you grieve. And that it is okay to be sad, because sometimes sad things happen, but you can get through it. Instead, Disney (and the like) creates children that grow up to be adolescents that grow up to be adults who have no idea how to deal with sad things. How is this healthy?

However, that's a sidetrack. The main track is just because you can, doesn't mean you should. Pride and Prejudice and Zombies may have been a fantastic idea in theory - and to be honest, I think it might actually make a pretty funny movie - but in reality, I hated it.  Your mileage may vary.