Who'd Have Thunk It?

I never thought I'd say this but… I miss winter.

And now I will be considerate and have a brief pause before moving on, in order to allow for those among you who have known me for a while and who are undoubtedly gobsmacked at the moment, to catch your breath and pinch yourself. Imagine Muzak.

Normally, January in Toronto is a month that tries my sanity. It is usually
-20, with a windchill of -40, my windows are frozen shut preventing any fresh air from entering my apartment for weeks on end, but that's okay, since when you brave the outdoors, the frigidity of said 'fresh air' is enough to freeze your lungs shut. Staying out for longer than a few minutes means that even if you are wearing handknit socks (and from January to March, I normally wear nothing but and consider myself a very lucky woman), you'll soon feel as if your toes have turned into little icicles and at times will seriously consider whether not that clinking noise you just heard was them falling off. When it's not too cold to go out, there's too much snow to go out. Or rather, there’s so much snow that I can walk up and down the sidewalk in front of my building, but as the piles from the snowplow clearing the street tend to accumulate by the curb cut and make passage by a wheelchair impossible no matter how good your tires are, I can't actually go anywhere. Cabin fever sets in sometime in the middle of the second week and by the time February arrives, I'm a raving lunatic, full on in the throes of SAD and foaming at the mouth to get outside.

This year, I am not even close to starting the raving lunatic process and it is the middle of January already. We had a bit of cold early in December, but since then, my windows have been open every day and I've been traipsing off to the grocery store in nothing but a sweater. Most of the time, I tell myself that it's lovely and whereas not being confined to your apartment is indeed wonderful, there's a big part of me that keeps chanting "this is wrong, this is wrong, this is wrong". There’s supposed to be cold. There’s supposed to be snow and lots of it. This kind of weather makes me nervous. This kind of weather convinces me that we are going to fry the planet and by the time the Tinks grow up, there's going to be nothing left for them but melting polar caps, smog so thick you can cut it and I am really afraid that they will never know what a tiger in the wild looks like. Not that I have personal experience in the latter, but you get my point.

About a week ago, Stephen Harper - the Prime Minister of Canada, a conservative who when first elected wasted no time in declaring that under his reign, Canada would not meet its Kyoto commitments - did an about face regarding his environmental policy. Probably doesn't hurt that a poll performed at around that time showed that the environment was the biggest concern of all Canadians - male, female, all ages, all political persuasions - and that the Liberal party elected the former environment minister as its new leader. So now, all of a sudden, the environment matters. Sure, I'm glad that he got there - who cares why, as long as something is done, right? - but it still makes me mad that it was not until Canadians essentially revolted (because all agreeing in a poll is about as revolutionary as Canadians get) that he did something. Smog, slimy rat bastard (it should say 'smug' there, but Dragon interpreted its as ‘smog’ and it seemed so apropos that I decided to leave it).

Last week, we had a couple of days where it was pretty cold. And I loved it. I meandered around the neighbourhood, taking photographs, running errands, my hands cold and enjoying being able to see my breath. I felt better, I felt happy, because I'm supposed to be able to see my breath in January and for a day or two, all was right in the world. Turns out that despite all my protestations, I have internalized the Canadianess to such a degree that unless it regularly looks like this in what is supposed to be winter (picture from 2004) 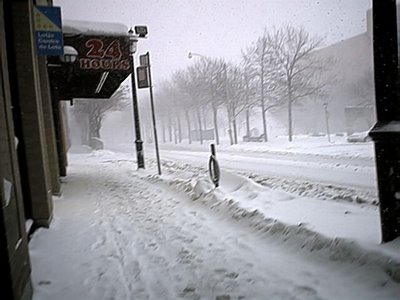 Who’d have thunk it?

p.s. people keep trying to tell me that my sense of personal responsibility is too well developed and that really, I don't have nearly as much power to change the world as I seem to believe. However, I'd like to point out that I started writing this post Saturday afternoon and that a mere 24 hours later, it got cold and snowy. Toronto’s currently being if not walloped, then at least dumped on with a mess of ice pellets and snow. Coincidence? I think not!