I'm cutting it a little bit closer this month, aren't I? It's moments away from being February, so I'd better get on with it if I want to squeak this by while I still have the chance.

I have been a bad, bad blogfriend. Honestly, I'd fully intended to post this much sooner, but I appear to have misplaced my brain for much of the past month. Diane came to Toronto to see the Rockettes and we met for a chat at the St. Lawrence Market. Outside. It was lovely, but also very weird to sit at a picnic table in December and not be cold. She brought me a number of yummy goodies, most of them homemade and I would love to show you pictures of them but... erm... They've been consumed. However! She also brought a present for Mojo - the loveliest little catnip pockets. For the first 10 years of her life, Mojo has been rather uninterested and unaffected by catnip, but it turns out that it was just a matter of a) presentation and b) getting primo stuff. She really, really likes these. 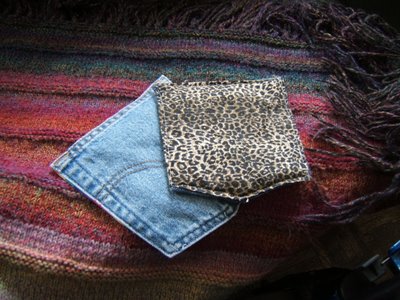 And Patti (sadly blogless) also thought of Mojo and sent the cutest little mouse via Harlot mail. Tiger striped, no less. This has also been a huge success, although my darling kitty’s insistence on playing with this (and demanding my participation) in the middle of ER is wearing a bit thin. Many thanks to both Diane and Patti for being so nice to us. 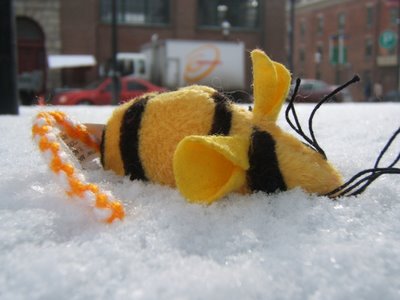 I don't like the new kind of horror movies. The Ring

, solely based on the creepy little child in the trailers on TV. I'm having the same reaction to The Messengers - the television trailer frightened me so much that I still have the images (especially the creepy little child) burned into my brain. I don't know what it is about them. I love horror - scaring the bejesus out of yourself can be quite delicious at times. Let me rephrase that: I love certain kinds of horror. Dog Soldiers, for instance, and I suspect that I will love his new movie The Descent, as well. But The Messengers? I think that the fact that I close my eyes and mute the TV whenever the trailer's on is a big hint that I won't be watching it. And that I’m a wuss.

I recently read an article in the New York Times that talked about new and interesting ways of making sure ads hit our eyeballs. It's estimated that we already see approximately 5000 ads a day - shall we take a brief pause to boggle at that number? - and marketing companies are forever thinking of new and interesting ways to publicize things. Ads for CSI on eggs! Ads for Tylenol on the paper sheet in your pediatrician's office! (these were actual examples cited in the article) Am I the only one who would like my doctor to be less obviously bought?

A 67-year-old woman has just become a mother. I'm all for people having children if they feel that they will be good parents, but shouldn't there be some sort of age limit? I do know some people who have become parents later in life - my dear brother-in-law, father of the Tinks, is one of them - but there is a big difference between fiftyish and almost 70. I'm aware that I should probably tread carefully here, but isn't part of being a good parent doing your best to actually be around to do the parenting? There are an awful lot of things you can't guard against - accidents, disease, etc. – but what are the chances of that happening if you give birth at 67? What do you think?

I found a brilliant article about depression via dooce that taught me a lot. Turns out that it also had something to say about arthritis.

And lastly, a picture that should be entitled "be careful what you wish for". My windows haven't been opened in almost two weeks. 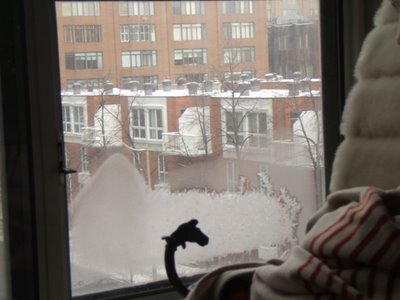