It’s been a week of blogmeets. I read about it on knitting blogs all the time, but have never experienced the phenomenon myself.

It all started last Wednesday, when I met up with Emma before her big move to Owen Sound. The lovely woman had offered to cut Mojo’s nails for me – or, as she’s often called during nail cutting events, “The Demon Cat From Hell”. Mojo has strong opinions about being told what to do. As do I, which may explain why I’ve always understood her panic at being restrained and having bits of herself cut off. Surprisingly, it went off without a hitch. Minimum trauma to the cat and no damage at all to Emma. After that, we chatted for a while and what I remember most is the laughing. There was a lot of it. Why the woman has to move is beyond me.

This weekend was the inaugural TUFT. Although I am no longer a knitter, I do have a somewhat embarrassing tendency to fondle yarn (and occasionally making small satisfied cooing noises while doing so), so naturally, meeting up with Stephanie and Juno was a must. We met at St. Lawrence Market at 1:15pm. Well, I should say that we were supposed to meet at St. Lawrence Market at 1:15pm, but as the minutes ticked by and my toes increasingly showed signs of freezing solid and falling off with little festive clinking sounds, it became apparent that there was some sort of hiccup. I managed to entertain myself.

First, I ran into my friend, the Birthday Goddess 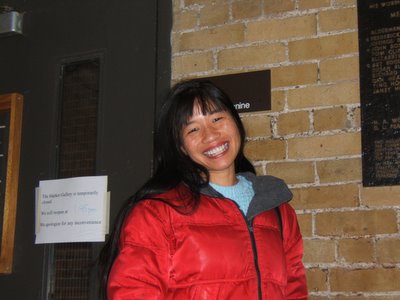 Then chatted with a neighbour and got roped into watching Sky’s stall while he went to buy lunch. Didn't manage to sell anything - a career in sales is clearly not for me). And I didn’t insist on being rewarded for it, which I think was really polite of me, as he sells the most gorgeous silk and cashmere scarves from India.

The weary TUFTies finally arrived and we hurried off to warmer locales for pubgrub. Solely for the warmth it provides. Really. Had nothing to do with the beer, which has been pushed out of this picture so we could all pretend it was a non-alcoholic event. Note the fabulous handknit shawls. 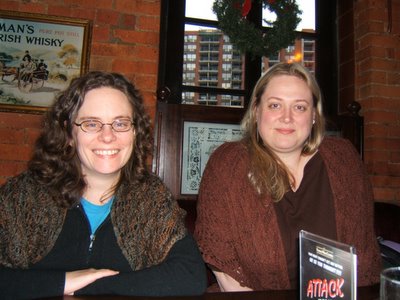 We discussed other possibilities for Juno’s ongoing exposure to “the ways of our people” and naturally, poutine came up. Juno and I both agreed that this was something best experienced in theory and I have no idea why Stephanie thought waxing poetic about how it’s best when the cheese curds are squeaky would make it more enticing. I don’t care how long I’ve lived here, I claim an immigrant exemption. Poutine is not the way of my people and I’m so not eating it.