The Five of Cups

November 18, 2005
A long time ago – a very, very long time ago – I had my tarot cards read. I’ve had them read since, but none were as memorable as that day in February some 17(?) years ago. It wasn’t that the psychic was particularly good, in fact, she rather sucked. Except for one moment which changed the way I think. She turned this card, the Five of Cups: 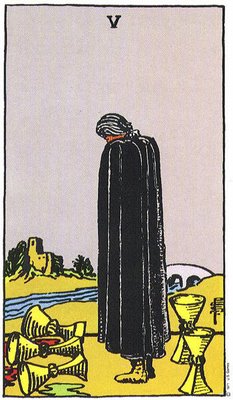 Fairly earth shattering, no? I tend to forget at times. Often, actually. Especially when the pain is hunting me or when I forget that it’s all a process and that patience and perseverance are the keys to getting where I want. And then at some point, it comes back to me. Look at what you have, not at what you don’t have. It’s a hard lesson to live - the temptation to rail at what has stopped you from being where you think you should be, is so much louder than the quiet reminder to look, really look at your life.


And that’s the other thing. That large happiness is so rare in life. We – well, I, anyway – tend to forget that the true stuff of happy is often in the small moments. Someone once told me an old saying – Portuguese, she claimed – “there is no happiness, only moments of happiness”. The trick seems to be to notice those moments, to pay attention to the seconds of joy, of laughter, of being pulled out of yourself to truly see what is around you, to see what you have. Sometimes, it takes a concerted effort, every day.

These are my happies this week:

The Tinks are still inside. A more detailed update to follow, with Bump Watch photo, next week.

I had an appointment this week where we discussed the effects of Enbrel in a roundabout way. I am no longer taking large amounts of anti-inflammatories, codeine and Tylenol #2. Extra-Strength Tylenol is sufficient to get things down to manageable. Also, one of the reasons I’ve lost weight (a bit too much, but I’m working on it) is that the pain levels are now so low that I’m moving more. You’d be surprised how many calories you can use, even while sitting down. I keep forgetting how mindblowing the change is.

I still haven’t turned on the heat.

I went out a to take pictures of Fall things a few days ago and came upon a squirrel, busily foraging, burying, preparing for the cold. So naturally, I followed it – slowly, so I wouldn’t scare it - thinking I’d be able to get a cute picture. That worked for a minute or so, until the squirrel decided it’d had enough of being stalked and started walking towards me, flattening itself so it’d look more intimidating. I know enough about animals to realize when you shouldn’t push any further, so I backed down. Still got a not-bad picture, though. And a good laugh.

I watched The Sisterhood of the Travelling Pants and absolutely loved it. I’m an adult, so I didn’t cry. Much. Only the last 30 minutes.

Instead of the news, I’ve started watching an episode of Sex and the City before I go to bed. I’m sleeping better now. 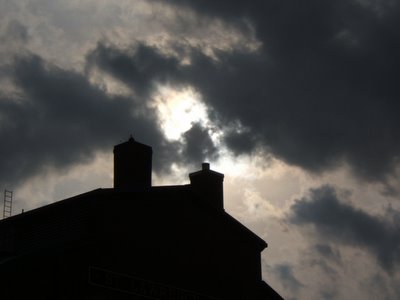 What makes you happy today?