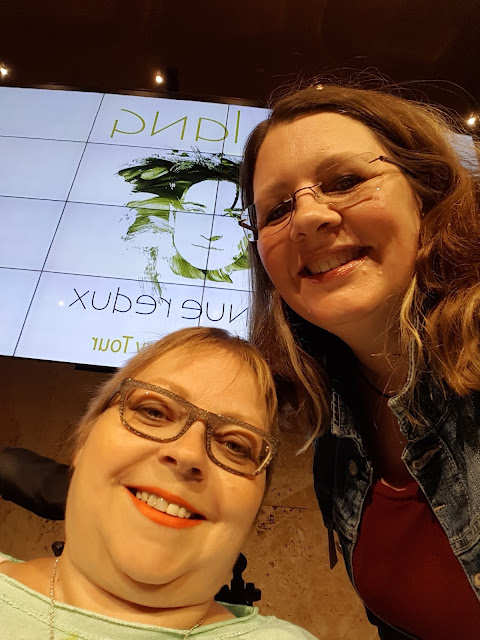 I did not know that listening to k.d. lang sing Hallelujah was on my life list until last Thursday night at the Sony Centre in Toronto.

I'm coming of of a very adventurous weekend. And it all started with a k.d. lang concert.

To be honest, I have never been a huge k.d. lang fan. That is to say, I’ve known that she is a Canadian icon and a fantastic singer, but I haven’t really followed her music and her career. It’s not that I didn’t like her, just as I was mostly into other sorts of music.

I’m on the Sony Centre mailing list and when I got an email with a notice that she was going to be performing there, I thought why not? and bought some tickets. Michele liked the thought of coming with me, but she is also in the same boat of this wonderful singer not having been much on her radar.

Which is why we turned to each other after her second song and said “what have we been missing in the last 25 years?”

The tour is called Ingénue Redux and celebrates the 25th anniversary of lang’s album Ingénue. Which I did not own prior to last week, but you can bet that was rectified the minute I came home from the concert. Ingénue (25th Anniversary Edition)

Donovan Woods opened the show and got the crowd nicely warmed up with his performance and the in-between song chat. Very funny man. And a damn good songwriter — his Next Year made me tear up. Of course, that could be the personal resonance.

And then k.d. lang came on stage and completely mesmerized everyone. It was obvious that many in the audience were long-time fans, so it all felt very much like a reunion of sorts. Obviously I knew that lang has a sense of humor — you can’t be aware of how her career started out and not know that. I did not know, however, how cheeky she is. Listening to her sing was wonderful and listening to her speak made me laugh.

The set included songs from Ingénue, as well as Honey and Smoke from her collaboration with Neko Chase and Laura Veris

(now also part of my collection).

I loved everything about this evening. I loved the set, sumptuous velvet curtains draped artfully and made to come alive with different lighting. Behind the band was a number of large and globular lights that lit and faded with different songs and in tune to the music. The set contributed to the mood, which was then enhanced by a group of incredible musicians and singers supporting lang’s performance.

I also in particular loved the way the evening closed (at least before the encores): with three songs by Canadian songwriters form the album Hymns of the 49th Parallel

. The first by Joni Mitchell (and after a very adventurous weekend, I can no longer remember which one it was, except that I knew it), Helpless by Neil Young, and of course Hallelujah by Leonard Cohen (his Various Positions

album has been one of my favourites for years). Who sings it can make it into a different song, but both versions are lovely.

That video is good, but nothing like what happened last Thursday. Maybe it was the blend of the Sony Centre with its fantastic acoustics and a woman with a transcendent voice that allowed us, the audience, to hear her sing this beautiful song with such profound perfection. Perhaps it was because this was the culminating piece of a set that had us hypnotized well and thoroughly with amazing songs sung so well. It doesn’t matter why, only that I sat through it transfixed on with tears in my eyes.

Thank you, k.d. lang, for one of the best concerts of my life.
Adventures

Rick Phillips said…
Hallelujah is such a great song and KD Lang is a wonderful singer.
10:33 PM