Thoughts from a Bonnie Raitt Concert 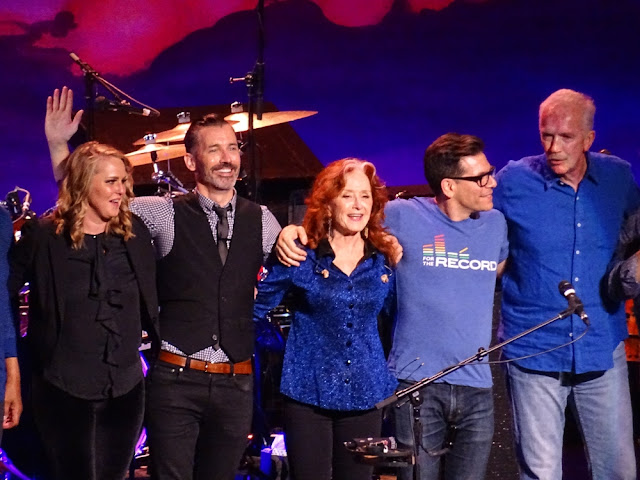 Bonnie Raitt and I were in the same room on Friday. Along with 3000 other people, but I wasn’t paying much attention to them. As she was singing, a variety of thoughts occurred to me.

When live music is actually live
I’m a sucker for singer-songwriters. People who have something to say and know music and musicians well enough to say it in a song. The joy of watching them perform their music live with no lip-synching is something truly special. Sure, there is some wandering/dancing around on the stage to give the audience something to look at as well as to listen to, but it is not a dance performance. It is about the songs.

As Bonnie gave an instruction to each song, telling the story of where it came from, who had sung it or inspired the writing of it, her stories ranged 50 years. It was like a masterclass in country blues.

Her band was also absolutely phenomenal and opener Royal Wood was excellent, too. I walked out of the Sony Centre feeling invigorated and filled with joy. It had been a privilege to watch these talented musicians do what they do so well.

Invisible disability
Did you know that having a disability gives you a superpower? It makes you invisible. Yes, really! The Boy and I walked up to a ticket taker and I handed her the tickets. She scanned them, then informed me that she would get me help to lead me to my seat. “No, it’s okay,” I said. “I know where I’m going.” Also, I wasn’t ready to go to my seat quite yet, but I left that unsaid. She continued looking around for the person assigned to escort patrons with disabilities and I tried again. “It’s okay,” I said a little louder. “I know where it is.”

She finally found the person who came over with an intensely helpful look on her face. “Really, it’s alright,” I said yet again. “I know where I’m going.” This one did hear me, so apparently the invisibility wore off. Irritation will do that.

Taking a chance
I’ve been feeling sick for close to a couple of months now. The kind of sick that makes everything harder and has been giving me profound brain fog. The kind where everyone looks at you with concern and ask if you’re okay because you look terrible and/or terribly tired. I’ve been off work since early June because of it and my body has decided that I’m going to keep not being at work for the rest of the month.

The tickets for the concert were purchased four months ago when I was just tired, not completely depleted of every morsel of energy. So when I realized that the concert was coming up, I considered not going. Then I thought I’d go and leave when the wall hit me (which it usually does about three hours after my nap). So off we went.

And somehow, I felt okay. I’m sure the half litre of Coca-Cola helped (caffeine can be medicinal!), and I’m also sure the fun filter was operational. But dare I say it? I had a couple of waves of tired, but it wasn’t that sick kind of tired.

Which is why I often take the chance to do something even when I’m not feeling all that great. Because it often works out well and then you have an experience that can keep you company on the crappy days.

When I came home, I visited the washroom and as I was washing my hands, I looked in the mirror. And I looked like myself. For so long, I have looked exhausted and sick. And on Friday night, I looked like me again.

I still feel tired and I still have some of those interesting symptoms that I’ve had for the past two months. But they are a little less and I feel more like me. I hope it lasts. But if it doesn’t, this brief interlude will at least give me hope. Hope that this isn’t permanent.

And in a good weekend, that is the biggest joy.
Chronic Illness Disability Thinking

Kaz said…
Sounds like an excellent evening - all the better for seemingly rejuvenating you somewhat as well. I do understand where you're coming from. I had Tai Chi last night, and had had a bad pain day. Sufficiently so that Himself made it clear he thought I was bonkers to even think of going. But I went anyway. And yes, it was difficult, physically. But mentally it was a whole other experience. The teachers know I have RA and they watch out for how I might be from class to class. So there is support for the fact that I'm there. I got a one on one lesson from the Master, because I was the only one of my beginner group so, a. that felt special, b. I now know what I'm doing, properly, for all the parts of the sequence I've learned so far, and c. I conquered something in myself to get there, because it would have been SO easy to just give in to the pain and lethargy and not go... Sometimes, despite how crap we are, we just have to go do the thing, whatever it is, because that thing can be transformative.
8:33 PM

Rick Phillips said…
Bonnie Raitt is so good in concert. I saw her in Indianapolis a few years back and she was marvelous.

I hope you get to feeling better soon my friend.
8:56 PM

mary said…
Music always makes me feel better. I volunteer for our local arts council and work a lot of the concerts. My town also does monthly jazz concerts in the winter. Such a wonderful warm event to attend on a cold night. There is something that renews the spirit as you listen to music. Seeing Bonnie, lucky girl.

Unknown said…
Oh my gosh,...Bonnie Raitt!!! "Let's give'em something to talk about." "A little mystery to figure out." Like how we are handing major medical issues and Rock's It! LOL
12:30 PM

for me Your blog is very useful .I really like your post.
thank you for your sharing.
Please click this post,if you wanna join casino online. Thank you.