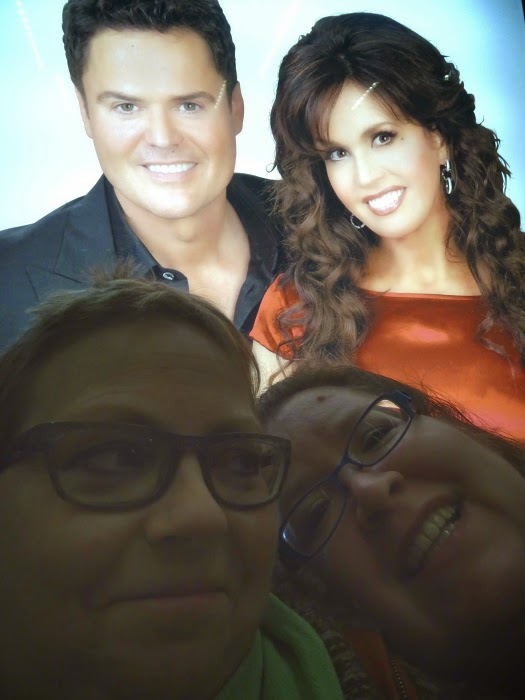 From the varying reactions we had when we shared our plans, it’s obvious that this is not to everyone’s taste. Sure, the show was a bit Vegas, something that wouldn’t be noticed in Vegas, but is noticeable here in the frozen North. But it was also absolutely wonderful. Both showed that they more than deserve their reputation for professionalism and careers spanning 50 years each. I had forgotten how beautiful both their voices are. They also know how to entertain. There were trips down memory lane,  there were duets and solos, songs from each of their many Broadway roles and Marie absolutely killed in a beautiful rendition of How Great Thou Art. But that was in the second act. The first was mostly about getting us warmed up with familiar songs.

We were in between songs, the anticipation rising in the darkened theatre, when the shape of a man in a suit appeared next to me. My first thought was that this didn’t look like the usher who’d been there up to that point. Then the man reached out his hand to shake mine, asked me if I was having fun, and I realized it was Donny Osmond. Then he moved down the stairs, singing and shaking people’s hands and I sat with a tingling hand and a huge grin on my face.

Donny Osmond and I had a moment! I may never wash that hand again…

Donny was my first celebrity crush.  I was 11, he was 16, but the age difference didn’t matter. That year, he got me through the hardest three months of my young life.

I had been in the hospital before, but in September 1973, I was admitted to a rehab hospital on the Danish coast. I’ve written about it before, but not in detail. Decades later, the memories have remained too painful.

The children’s ward in this rehab hospital was run like the orphanage in Oliver Twist. I cried constantly for the first three weeks, then I realized it didn’t change anything and I stopped crying. It was so far from home that my mother could only visit once a week, on Wednesdays, although I did get to go home for 48 hours on weekends. I loved Friday and Saturday was my favourite. Sundays, though, were spent counting down the hours and minutes until we had to leave for the long drive north.
The days of the week were long, even though they were filled with activities like school, physiotherapy, occupational therapy, pool therapy, meals (terrible food), and every afternoon, the entire ward rested for two hours, starting at 3 PM and lasting until dinner arrived at 5. This happened on our stomachs. There were no options, you had to lie on your stomach. In retrospect, there was a pretty good medical reason for that — it kept juvenile arthritis hips from contracting — but I’m pretty sure it was also to give the staff a break.

I’d often spend those two hours with Donny. I didn’t yet have an Osmond album — the tape player and my first Osmond tape happened four months later, as a gifts to me on my sister’s christening. I did have a picture of him that I got out some preteen magazine. I’d lie on my stomach, Donny propped up against the bars of the headboard of my hospital bed, and I’d dream. I’m not going to lie — it was at times a bit swooney, but mostly it was about going somewhere else in my head with someone I liked a whole lot. What did we do in those daydreams? Mostly just talk and be together, away from this hospital that felt like a prison. Away from the reality of juvenile arthritis. Away from pain, medical tests, injections, and having no control.

Since then, Donny’s always had a special place in my heart. Even during the years when I was temporarily too cool to like his music much. That phase didn’t last long, though. I gave in to being an unrepentant and lifelong fan after seeing him in Joseph and the Technicolor Dreamcoat.

But then, my relationship with Donny was never much about the music. It was about feeling safe, about having someone to chase away the loneliness of being a little girl with a painful chronic illness. It was about friendship.

Last night, it felt as if for a brief moment, I saw my friend again. And somewhere deep inside of me, my 11-year-old self smiled and the circle closed.

Maybe next time, we’ll get to have dinner and catch up. A lot has happened in the last 40 years.
Friends Juvenile Arthritis

Anonymous said…
What a wonderful experience! Thank you for sharing. - Carla
9:54 AM

Anonymous said…
This was beautiful. Thank you for sharing, Lene.
9:15 AM