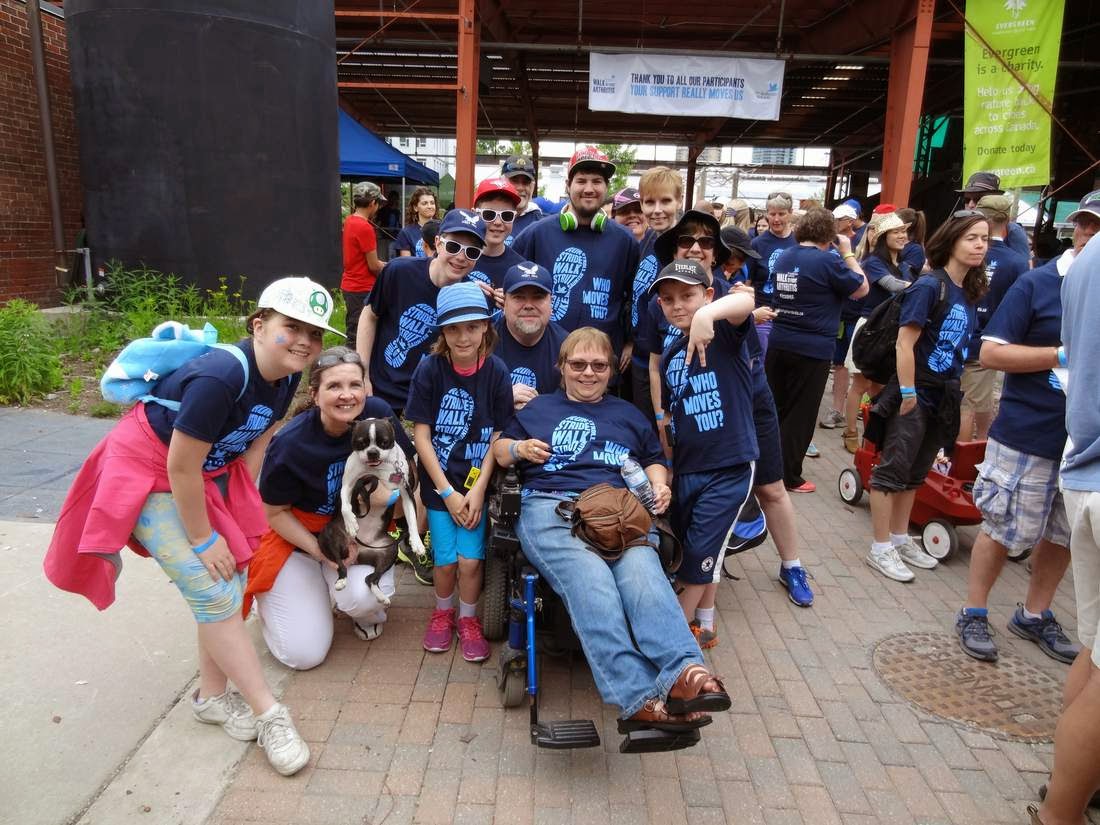 Photo by a kind fellow walker
The Your Life with RA team raised over $2,300 for our 5K in the Walk to Fight Arthritis, exceeding our goal by $700. Not bad for our first time out!

We all got up at the crack of dawn Sunday and headed to the Evergreen Brick Works. It’s a beautiful green space in the middle of Toronto and none of us had ever been before. This added a nice sense of adventure to the day. We registered and got our Walk T-shirts, which promptly lost us the ability to find each other in the sea of blue!

There was music and activities for the kids and a bit of celebrity watching, too. Lloyd Robertson and Olivia Chow were there. These names won’t mean much to non-Canadians, but both are pretty famous up here. And both shared their experiences of arthritis, Lloyd with his own arthritis and Olivia sharing her mother’s story of living with RA. Somehow, our team got our picture taken with Olivia Chow and we all pretty jazzed about that! 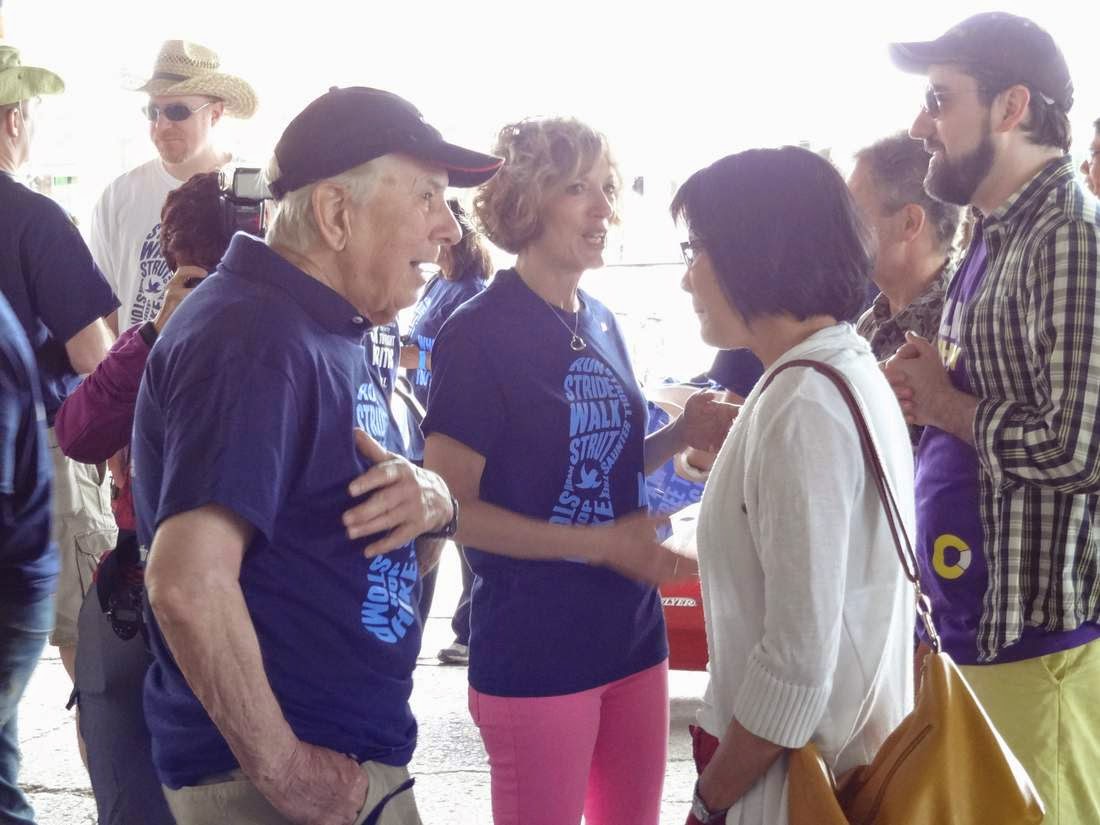 Photo by Janne
Just before the Walk started, a very enthusiastic and lovely woman led the warm-up dance 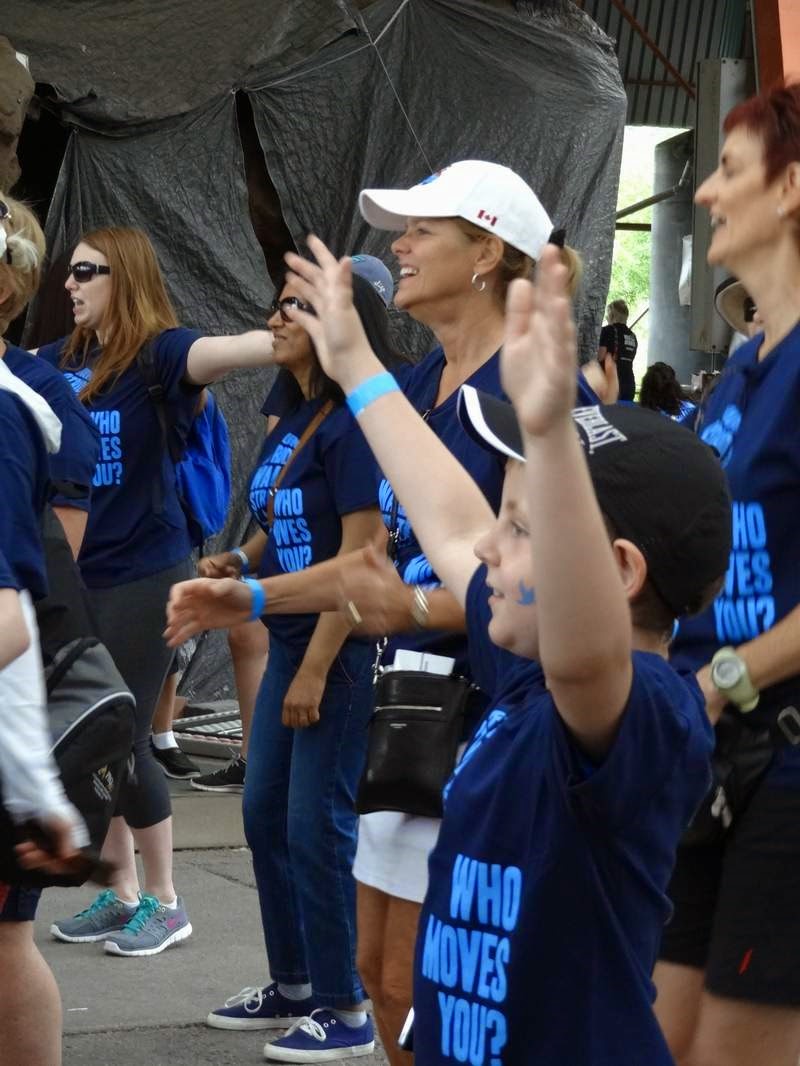 Photo by Janne
And this was the point where I became completely overwhelmed and started crying. Right there, in the middle of this group of hundreds of people all dressed in blue T-shirts, warming up together before walking, I felt the power of the choice that everyone had made. The choice to walk, to raise money, to help. I looked at my team, these people who, when I asked if they wanted to walk with me, had said yes in an instant. I looked at the kids on the team who came because they knew me and I thought of all the people who had donated to us. I looked at the hundreds of people getting ready to spend a couple of hours walking on a Sunday morning and in that moment, it became supremely personal. It felt as if they were doing it for me.

And lest you think I am a self absorbed nitwit, I am aware that each of the participants was walking for their own reasons. Perhaps for themselves, perhaps for a friend or family member, but it was also for the 4.6 million Canadians who live with arthritis. And that means that it was for each one of those 4.6 million and therefore just for me. I tried to control the tears, but they kept coming, so I moved away from the group, hoping to keep the tears from turning into sobs, trying to collect myself. And then I saw this, colored by Liam and where he wrote that he was moving for me (Moster is the Danish word for maternal aunt) 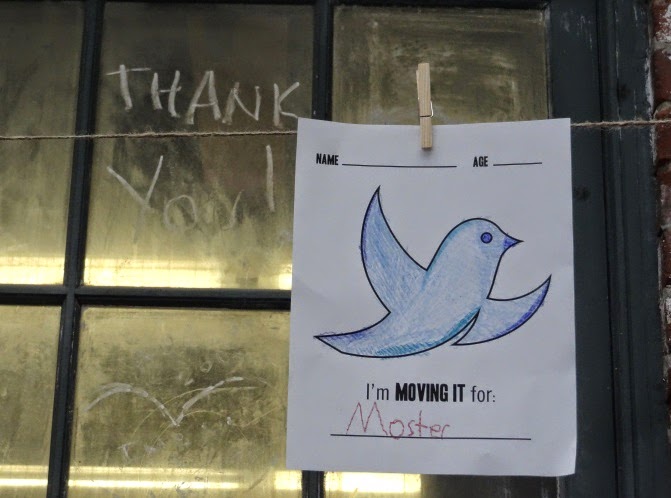 and I lost it again.

I did eventually pull myself together and then it was time for us to start the Walk. The group doing the 5K went first 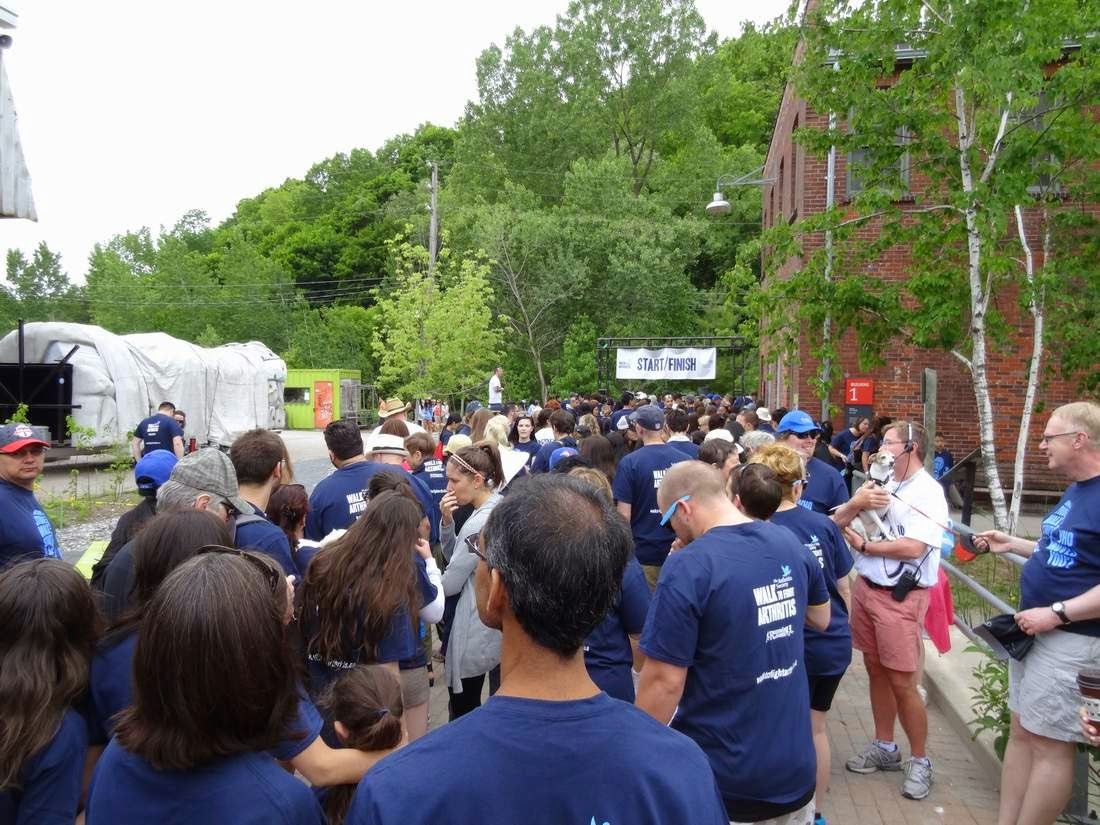 Photo by Janne
and then we set off. I had no idea where we were going, but as we moved away from the area around the Evergreen Brick Works, the route led into the Don Valley. Into the woods. 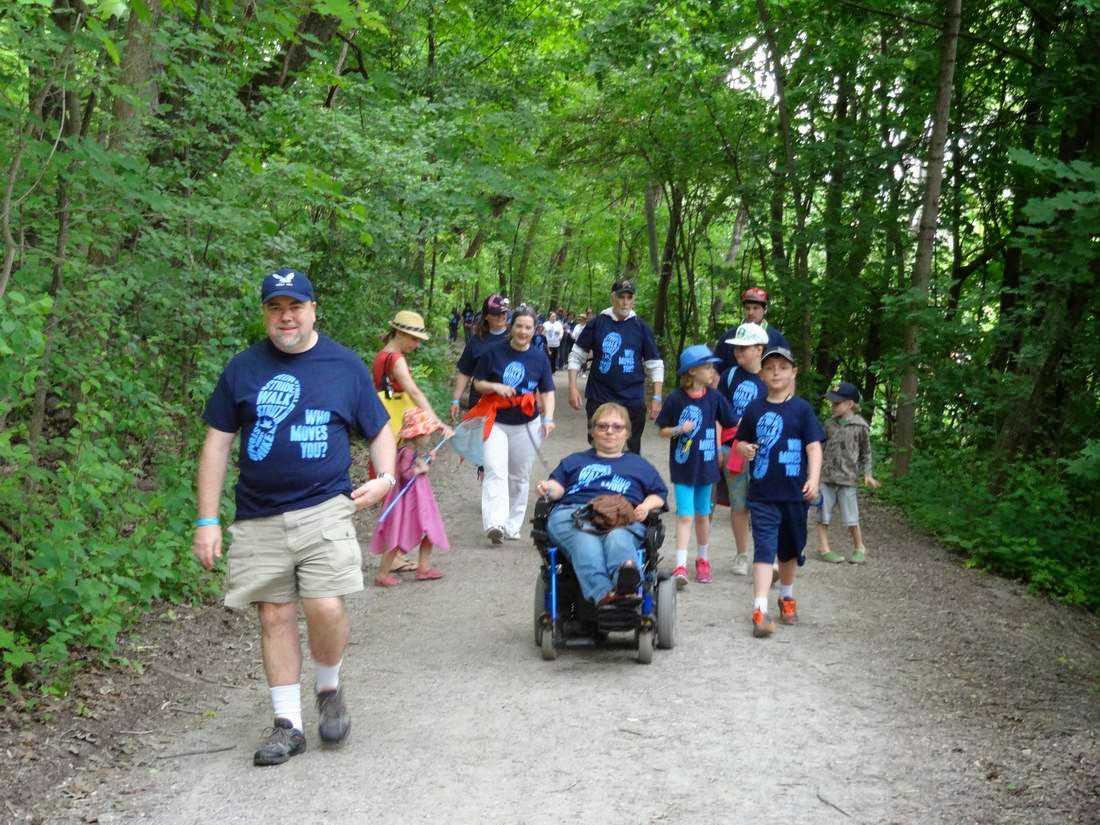 Photo by Janne
Which made me verklempt again. One of the only times where I get caught up in the ifonlys, thinking about how much I’d love to be ablebodied so I could tromp through the woods with my camera is when I go up the Don Valley Parkway and look into the wooded area next to the highway. I had no idea he there was a park there. With trails! I’m definitely going back with my camera and no goal but to take a lot of photos. 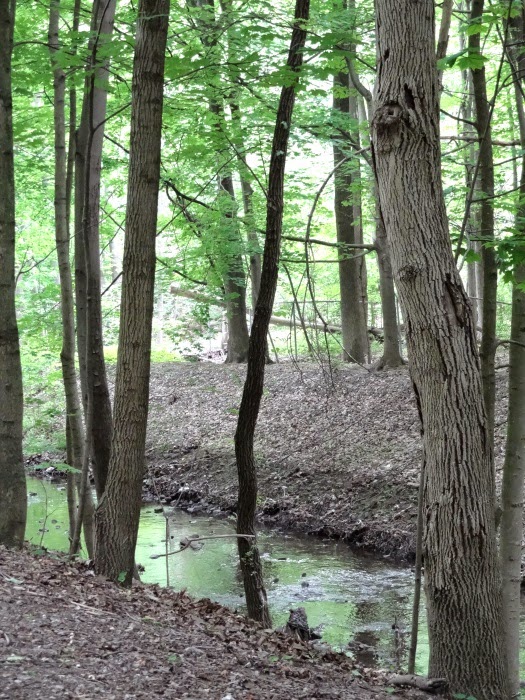 We could hear the halfway point a good 10 minutes before we got there – a very energetic group of drummers kept everyone motivated. 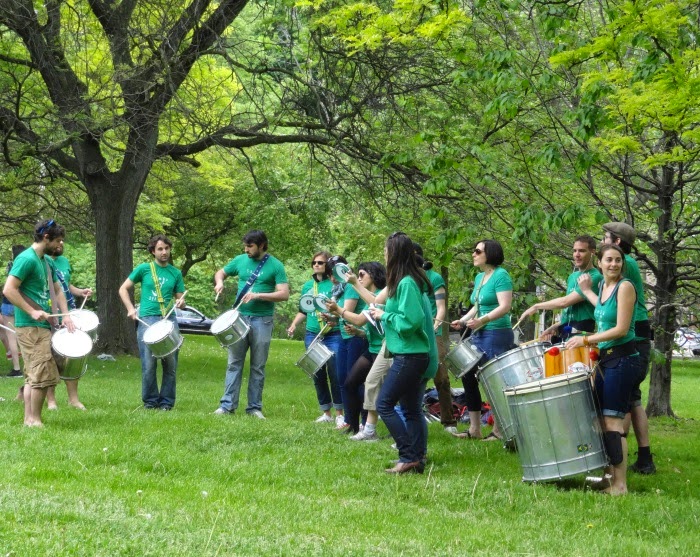 The route was beautiful and 5K went by much faster than I’d expected. I have an email in to the lovely people at the Arthritis Society who called the route “wheelchair friendly.” I don’t think they’ve ever walked next to a wheelchair on the very natural paths that alternated between hardpacked soil, gravel — some looser than others — rocky bits and steep hills. 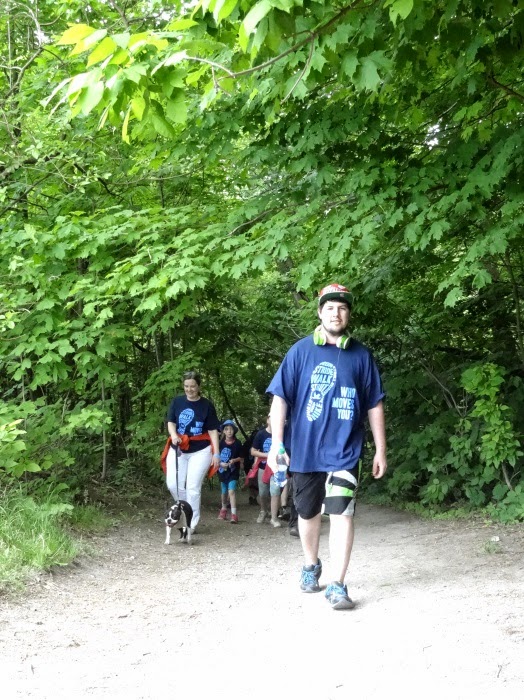 I'm hereby offering my services to write a blurb about the route that will help wheelchair users decide if they should do the 1K or can do the 5K.

It worked for my power chair, but was more like off-roading than a walk. We made it into a positive, though, concocting an elaborate fantasy in which we were orienteering. On the way back, a certain member of the team said “we need a water obstacle.”

Ask and ye shall receive! 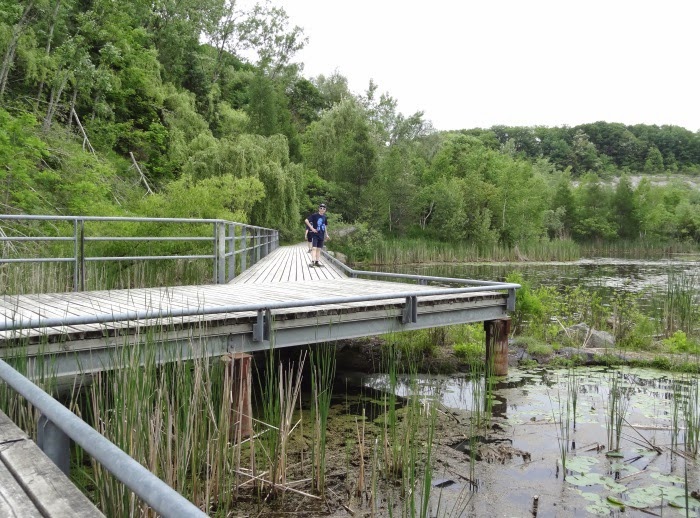 and we saw a turtle in the water obstacle! I’ve never seen one in the wild, so that was a thrill. 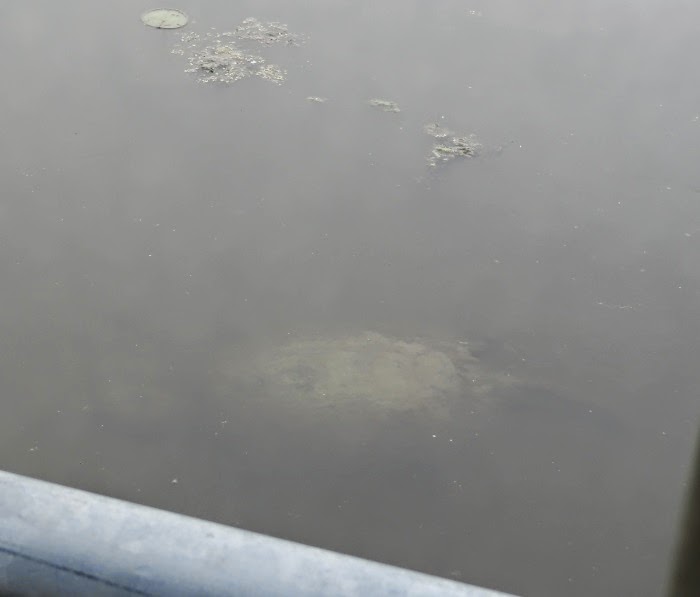 Shortly after that, we reached the finish line 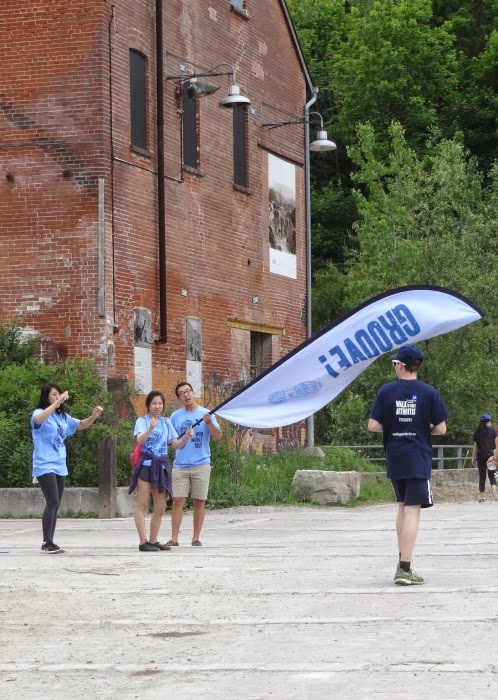 and indulged in some well-deserved reward ice cream. 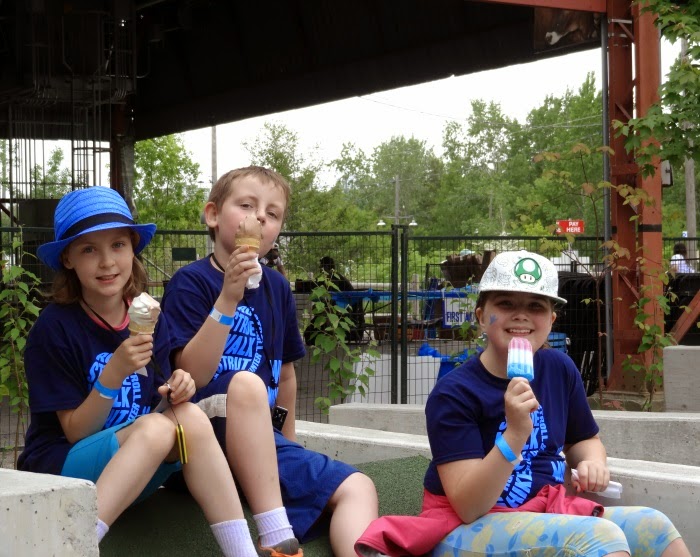 We’ve all had a couple of days to process the experience and there was an incredibly positive one. We were so jazzed when we finished that we all immediately agreed to do it again next year. Our $2,300 contributed to the total of $175,000 raised in Toronto and the $1.2 million raised across the country and that’s a number to make you feel all quiet inside.

This was about more than the money. It was about that intangible sense of empowerment and community I mentioned earlier. It seemed to have had a significant impact on the kids on the team. Morgan refused to take off her T-shirt, sleeping in it overnight and wearing it to school the next day. Liam refused to have the Arthritis Society bird washed off his cheek and may still be wearing it. The kids were all very proud of themselves and for that matter, so were the adults. Donations have continued to trickle in after the Walk and if you want to add yours — non-Canadian donations very much appreciated, too — please visit our team page or my personal page.

L."Wren" Vandever said…
What an incredible experience, Lene! And what a beautiful place for a 5K run/walk.

Anonymous said…
"and we saw a turtle in the water obstacle! I’ve never seen one in the wild, so that was a thrill."

Really? Really? I never thought big cities could be so different. I've seen lots of turtles in the wild, so to speak. Houston does have a lot of bayous, but I'm thinking I'd seen lots of turtles before moving here. And here in Houston I see them every week, sometimes more often than that. To be sure, my office building is very close to some man-made ponds (retainage ponds, if you must know) and there are fish, ducks, and turtles all the time. I do get excited when egrets and herons show up, and that happens at least monthly.

I wonder what animals or birds are common place where you live that I would be thrilled to see.

Congratulations on your successful walk!