Reachers Can Help You Be Independent with RA and Disability

May 14, 2012
This is the first post in a new series on helpful tools and doodads for people with RA and disability.

When we first came to Canada 30 years ago, I brought a reacher with me. It was a terrific reacher - lightweight, elegant and easy to use. During my time in Canada, I've had a number of occupational therapists in my home and they have always collapsed in swoons about this particular reacher. Why? Because it is designed to hold closed. This was new to them because in North America, reachers are designed in such a way that you have to squeeze the handle shut in order to close the tongs at the other end.

This is difficult to describe, so I took some pictures. First, my trusty 30-year-old reacher from Denmark.

As you can see, this reacher is also in two pieces. It was a terrific piece of equipment, sturdy and durable. It gave me 30 years of frequent, sometimes daily use, picking up pieces of paper, pens, food containers, fruit and everything else you can imagine. I used it to turn the heat and AC up and down, cleaned up cat puke with it and threw it on the floor to use with my feet in a sweeping motion under bookshelves and the couch to get at the toy mice that Lucy enjoys whacking under things. It was only when I accidentally drove over it in my 300+ pound wheelchair that it gave up the ghost and even then, not for another few weeks.

So I set out looking for another reacher and this is where things got difficult. Because this is when I realized why every OT I'd ever met was in raptures. Meet the North American reacher.

In my view, there are two things wrong with this type of reacher. The first is the design. Could you get more utilitarian and hospital-like? This is an important tool that many people will want to have it easily available in several rooms of their house. This means it will be visible. How about making it nice to look at, as well as functional? According to one of my miracle repair guys, Scandinavia is generally more focused on design in mobility devices and aids for daily living. That theory seems to be borne out by my original, 30-year-old reacher.

Second, and very basic, the North American reacher suffers the same problem that I often invoke when speaking of the Ontario Building Code. Namely, that it is designed for largely able-bodied people who have trouble reaching the floor.

For most people, their mobility problems are not limited to only the legs, but also affect their upper body, including arms, hands and fingers. The North American reacher requires you to hold the tongs closed by squeezing the handle and continuing to do so until you have finished the task. This assumes you have decent or even normal grip strength. You can – if you look hard enough – find a version of the North America reacher that has a locking mechanism, but as far as I can tell, that assumes that you have fairly normal dexterity and can easily use both hands as you're wielding this contraption. As for disengaging the lock, on this model, it's described as "[a] flip of the thumb releases the lock." Uh-huh. That assumes that you can flip your thumb.

Dear designers of aids to daily living: May I introduce you to your target audience. Y’know… the ones who have disabilities?

It boggles the mind.

Anyway, since I do not have normal grip strength (not by a long shot) and since the deformities in my hands mean that I cannot open my hand wide enough to get it around the "pistol grip" closing mechanism - or for that matter have the dexterity to use such a pistol grip (which assumes you can bend your fingers) - I needed something else. I vaguely recalled seeing something like my old reacher in a catalogue several years ago when I was chatting to one of the other staff in my wheelchair repair place (they not only sell and repair wheelchairs, but also other medical supplies and aids for daily living). I called her up and described the item in the catalog as being "on the right page, and it's a photo of three reachers in red, green and yellow." Based on that, she found what I was looking for

Elegant, funky, easy to operate for people who have a disability in their hands. Opens easily, even if you have limited manual mobility, dexterity and strength. Once you grip whatever you're picking up, you let go of the lever in the handle and it holds tightly shut on it own. Also incredibly sturdy compared to the North American version, which (to be honest) are kind of crap. Of course, if you compare the price of around $25 for the reacher that I can't use to the $143 for the imported Swedish reacher, it's a bit of a difference. But I'm pretty sure this one is going to last me another 30 years, so in the long run, it's a steal! 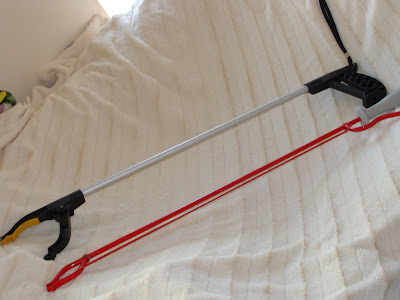 This reacher is by Sammons Preston (I think they’re the importer – the Swedish name’s different) and you can get it here - $99 in the US. Well worth it. This lightweight, self-closing reacher is also available on Amazon in red

You may also want to read Marianna's post about other considerations when getting a reacher.

abcsofra said…
Great post! I got a laugh about the North American design features. And your final find looks quite nice to say the least. Of course it is all about functionality and whether an assistive device actually assists that matters :-)
10:56 AM

Kia said…
I'm going to order one right now - well, maybe after I get back from my first holiday in 5 years and will be home to receive packages.
12:32 PM

Marianna Paulson said…
I love the red one!

It's so true what you say re. designs for people who actually use the things they're designed for.

AlisonH said…
I've seen the clunky ones and wondered--glad to know I was right, sorry to hear I was right. Glad you got a decent one after all that!
8:28 PM

Diane said…
Good to know in case my Mom needs something like in the future. Her hand strength is definitely not what it used to be.

We use one of the North American variety on the lawnmower to pick up sticks and dog toys. It's not that easy to use.
11:36 AM

The web link for the reacher goes to Patterson Medical and the item has been discontinued. I don't see where else to buy it but will keep looking.

Cindy said…
If you are in the UK, you can find them here: http://www.bartrams.net/productdetails.php?category_id=82&product_id=818

Sheenary Ryan said…
Hi Lene, I always love your posts
I was looking for something strong enough to pick up heavy things and I found a pooper scooper, made of metal with a long handle. This works well though awkward to manage.
Just for fun I left, the label,on it which gives my friends a laugh

Hugs to you, gentle ones of course