Getting Organized: The Desk

via GIPHY
I am not known for having a pristine home. Clean, yes. Tidy? Not so much. And this has two causes.

One, tidying up is not in my top priorities. It doesn’t really hold much interest for me and besides, I usually know exactly where things are in the piles. Once it’s cleaned up, that’s when I get lost. But it’s also not a top priority because I have limited energy. If I spend it on tidying, I rarely get anything else done. So I make a choice to live in what can best be described as organized chaos.

The second cause of the chaos is my disability. I can’t do much of the physical labour involved in cleaning and tidying up. For one, I can only reach my furniture at a certain level. This means that tables and other surfaces are used as horizontal filing areas. It also makes it very difficult to organize and Put Things Away.

I do have attendants coming in, but the time I have tends to be used for other things. As well, cleaning with someone really only works when they had the same cleaning style as you do. Otherwise, it just becomes another kind of mess.

The last six months haven’t seen much tidying. I didn’t have it the energy for it when I first came home from the hospital and after that, didn’t have enough energy to do my work and clean. After six months, as that organized chaos of yore is now just chaos.

And it’s driving me crazy. I can take a certain element of mess, but when every single surface of my home is occupied by disorganized piles of Stuff, the urge to throw it all out and start over is overwhelming.

I have therefore made myself a promise. To slowly and gradually get this place organized. And to keep myself accountable and motivated, I’ve decided to share it online.

The first step was my desk. This is what it looked like a week ago 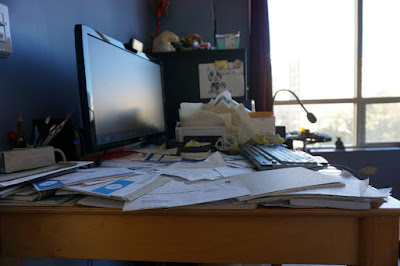 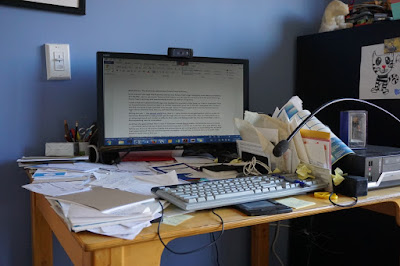 Although my desk is often what other people might call messy, it’s not as messy as this. Every now and again when the craziness lets up, I’ll do something about it. One wrinkle in this is that I can’t use most of the drawers in my filing cabinet on my own, so what needs to be filed just gets relocated to another horizontal surface. As well, my filing cabinet needs culling and organizing before I can file those things, so it’s a bit of a vicious circle. In other words, what had been sorted into the piles on the desk soon becomes a sea of paper again.

This is a new thing at Staples. Or if it isn’t new, then I’m newly aware of it. Magnetized receptacles for school stuff so your locker’s organized. And it works brilliantly out of school, too.

A while back, I bought a thing for markers and put it on my filing cabinet and it’s been wonderful. Easily accessible, yet Put Away. Earlier this week, I wandered into Staples for entertainment purposes and found something else.

Will you look at this: 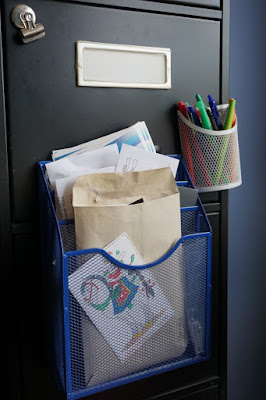 Isn’t that amazing? This now contains several different types of materials that previously took up residence on my desk. One, stuff I use for sending letters, etc., such as stamps and address labels. Another compartment contains pieces of paper that requires an action. And the third has an envelope in which is located cards and postcards for specific occasions. That will migrate elsewhere once the filing cabinet has been culled and something else to take its place. Or maybe it will be empty. Imagine that! 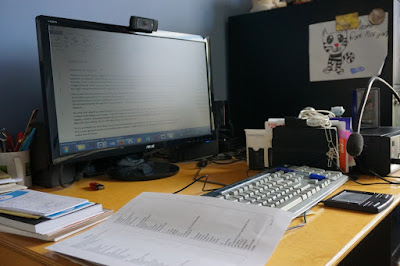 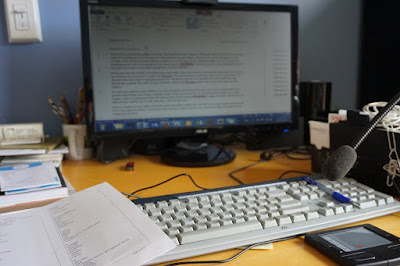 A week after cleaning up, my desk still looks like that. This is unheard of. It has never happened before. Usually within a week, the paper mass has have distributed itself into an archaeological dig again. I’m ecstatic. Lucy is less so, as she liked lying on the paper. She used to jump up on the desk as I was working and settle down on the paper “cushion” to sleep between my monitor and my keyboard. These days, she jumps up and wanders restlessly around, then stands across my keyboard and looks mournfully at me.

I’m thinking of placing one – ONE – piece of paper on my newly pristine desk. For the cat. 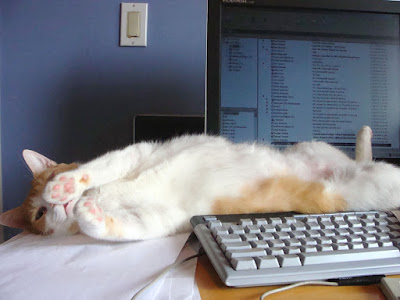 Unknown said…
Yes, it is difficult to get organized and keep that way if you are a wheelchair user, especially if you have a small space to work with. I live in a small (670 sq. ft) house that was built in 1924. It only has one real closet (in my son's room); the one in my bedroom is the entrance to the attic stairway. All of the rooms are small, including the kitchen. Advice on organizing a small kitchen always seems to recommend "using your vertical space" which generally means installing cabinets and shelving up to ceiling level. But being in a wheelchair means I CAN'T use that space for anything I need on a regular basis. One solution I've come up with is to use the front and side of my appliances for storage. I bought very strong magnetic hooks and use them to hang pots and pans on the side of my fridge; I use the same magnetic hooks for holding my spatula, whisk and potholders on the side of my oven; the front of my fridge has a magnetic paper towel holder. This keeps things where I can reach them from my wheelchair and frees up storage space in my kitchen. It doesn't work if your appliances have a non-magnetic surface. I'm planning on hot gluing neodynium magnets to small office supply baskets so I can hang them on my fridge and use them as spice racks. Because my kitchen is so small, I can be at the stove and reach behind me to grab a pan off the side of the fridge--which makes cooking convenient for everyone.
6:23 PM