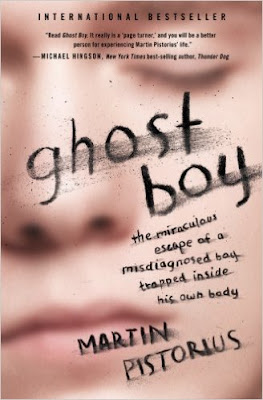 Martin Pistorius was 12 years old when he got sick. Over the next year, he gradually lost function of his body, his speech, and his mind. The doctors did not know what was wrong with him, but treated him for a bit of everything with no effect. At the end, they told his parents that he had the cognitive ability of a three month old child, and likely had no more than two years to live. They also said his parents should take him home to die.

A few years after that, Martin started waking up, becoming aware of his surroundings and regaining his mind. Unfortunately, he did not regain the use of his body, so no one knew that he was back to being himself again. This lasted more than 10 years.

Once he was in his early 20s, one of his caregivers noticed that he was responding as she spoke to him. She persuaded his parents to get him tested again and this was the start of his journey with augmentative communication and regaining part of his physical ability.

Ghost Boy: The Miraculous Escape of a Misdiagnosed Boy Trapped Inside His Own Body

is Martin’s memoir of his life during those years of silence. He writes eloquently about what it was like to be there, but not seen as a person. To be a body that is the passive recipient of care and unable to express any preferences at all.

He also writes about the abuse he suffered from caregivers. People with disabilities have higher rates of abuse and this is primarily doled out by caregivers. Martin’s depiction of this is heartbreaking and a call to action on better conditions and oversight of care.

Ghost Boy is also the story of his family and how his condition affected them. His parents were dedicated to taking care of him, but it was hard. There are some uncomfortable stories about just how hard it was and the impact it had, especially on his mother.

This book is also the story of how Martin learned to become a person again. A person who has free will and who makes choices about things as simple as what to have for breakfast, how to dress, and as complex as what to do with their life. After more than a decade of having all these choices made for him, learning how to be in charge of his own life was a challenge. A wonderful one, it turns out. When he was in his 30s, Martin met the woman who became his wife and the book is also about their love story.

Given my recent medical adventure, there was much that resonated in this book. I was lucky, having only three weeks or so of being silenced when I was on a ventilator. Still, there was familiar moments in Martin’s stories of his difficulties connecting and communicating.

Ghost Boy makes you think. About how we view people with disabilities, especially profound disabilities. About how we treat those who have difficulties communicating. About the abuse so often suffered by people who are dependent upon others. About the impact of disability on just not the person themselves, but their family and friends.

I highly recommend this book. It’s an easy, fast, and meaningful read. The audiobook is narrated by Simon Bubb, a UK narrator. He does an excellent job, but his British accent got a bit in the way for me. You see, Martin is originally from South Africa and I would have preferred his story in a voice that was closer to his upbringing and environment. For once, I’m recommending that you get the regular book instead of the audiobook.

These days, Martin is happily married and runs his own business. Check out his TED talk to hear the story from the man himself.
Book Club Reading