Thoughts on Walking and Not

This is a photograph from the last summer I walked. 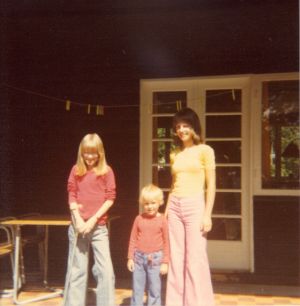 It’s the summer of 1976 and we’re at a cottage rented by my parents. Standing with me are my little sister — then actually little — and my best friend AB. We’re spending two weeks in this cottage made of wood, the exterior walls painted with some sort of preservative classic to cottages of the time. The backyard is tall with weedy grass growing in a sandy soil and surrounded by pines and the ocean is within walking distance. In my memories, the sun was shining the entire two weeks. That’s pretty unusual for Denmark, so it probably wasn’t. It was one of my favourite holidays and to this day, the smell of sand and pines and sun are among my favorite scents. Add a touch of ocean and I’m in heaven.

My parents had asked the doctors for a two week reprieve before I underwent the procedure that was supposed to help me walk. My juvenile arthritis had settled in my hips and hard, already causing changes in the joint. My left hip was the worst — you can see in the photo that I couldn’t straighten my leg anymore. I still remember the excruciating pain in the groin that comes with a hip joint that’s bone-on-bone. When I was walking, it was with the crutch and if we needed to go for longer distances, such as the beach close to that cottage, it was with me in a wheelchair. We did and once there, I walked with my crutches into the water. It was also the last summer I put my feet in saltwater.

At the end of the holiday, I went into the hospital and was placed in a body cast that went from the tip of my toes to my chest. It was thought that giving my hips a rest from moving would somehow stop the JA from its rampage. It didn’t. Instead, it stopped my ability to walk. I don’t remember the moment when we found out, but in my mother’s mind, it is vivid and she shared it in the Live Bold Live Now documentary about my life.

I posted the photo on my Facebook page, mentioning how it was the last summer I walked. Sallie, a good friend and very wise woman, asked how I felt about it. My first instinct was to say that it was fine, but my second thought wanted more time to figure it out.

I haven’t walked for 38 years and I no longer have the muscle memory of walking. I see other people do it and no part of me remembers how. I don’t remember how to make your body walk, something apparently so natural and ingrained that no one around me seems to have to concentrate to do it.

This weekend, The Boy took out the garbage and I watched him walk down the hallway, counting his steps. There are 62 steps from my apartment to the garbage chute and 62 steps back and he took them with ease. On the way back, his only focus was looking at me with a smile on his face, not on the 62 steps it would take to get to me.

I watch others walking down the street, to shopping, to the bus, walking the dog, pushing a stroller, or any other of the multitude of tasks that involve walking. I watch my attendants as they carry my dinner from the kitchen to my living room. There are days when I marvel at how you can all do this thing called walking without having to think about it and moreover, without great effort and pain.

My last memory of walking is less about the act of walking and more about the effort and pain that were part of it, as well as so many other movements. Spending a month in a body cast caused my hips to fuse, which took away the pain, as well as my mobility. I got some of the latter back after my hip replacements at 16. I also got my first power wheelchair and, as described in my story Unbound, it gave me back mobility and freedom.

And it is possible that it is because of that memory of pain, combined with two years in a hospital bed waiting for my new hip joints, and then the freedom of movement granted to me by a wheelchair, that I am fine with not walking. For me, the wheelchair wasn’t about losing the ability to walk, it was about gaining freedom. It was about finally leaving the hospital behind, about going home, about becoming normal again.

Or maybe it is the 38 years that have passed, leaving the grieving of the loss so far in the past that the wound has well and truly scarred over. Because I truly feel fine about not walking. There is some truth to that saying about how can you miss something if you don’t know what it is. I don’t remember how to walk, neither in my mind or my body and so, I don’t miss it.

Oddly, both my mind and my body remember dancing. And that I am not fine with losing.
Disability Juvenile Arthritis RA

Donna said…
Forgive me if this displays a shocking amount of ignorance, but I am curious about why you have not been back in salt water since that summer. To someone who knows little about it, it seems that putting a life preserver on and floating in water would be possible (maybe even beneficial?). I am assuming (perhaps incorrectly) that there are times now when someone physically lifts you; if so, it seems not insurmountable for someone to lift you into the ocean (for salt water) or a Great Lake. -Donna
4:36 PM

Kirsten said…
Do you ever dance in your dreams?
You are truly amazing.
9:13 PM

AlisonH said…
I think I understand the feeling of, you have the chair, it gives you mobility, and it is enough.

Sometimes just for a flash of moment I see other people walking without a cane and fear for their falling when their balance surely will give way. Followed by a flash of how do they do that? And then of a wistful, it would be cool, wouldn't it...

Then comes simply a great gratitude that the cane does me the good that it does. The world does not entirely spin now post-accident and I can walk again.
3:42 PM

Marianna Paulson said…
Lene, as I read this post, I was flooded with feelings. Anger over what you lost, due to the medical "know how" of the time. Sadness for your spirit (and feet) that want to hit the dance floor. Delighted that you are able demonstrate resilience and forgiveness.

I agree with Donna - if you long to immerse yourself in the healing benefits of water (you know me! :) ), there's assistance available to do so.

Finally, I can't help but wonder if surgery will advance to the point where your ability to walk is restored. If that were possible, would that be something you'd want to do?
5:28 PM

Leslie said…
This is beautiful. As always, I love your perspective.
8:04 PM